The (eye) doctor is in, and he can treat your cataract in 7 minutes | Inquirer Lifestyle 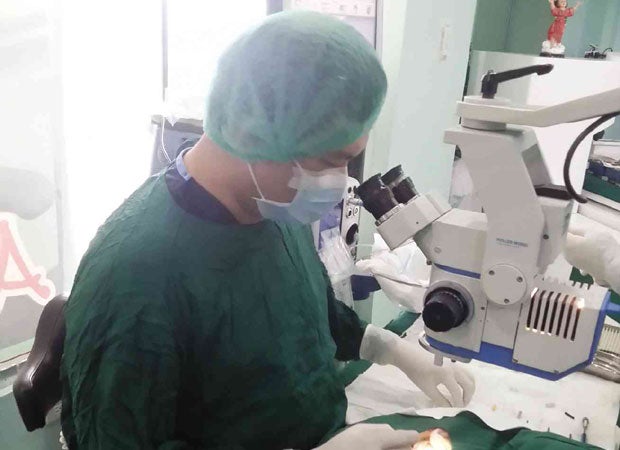 The (eye) doctor is in, and he can treat your cataract in 7 minutes

It is 11 a.m. and Led Zeppelin’s “Good Times, Bad Times” plays in the background as Dr. Noel Jusay Lacsamana, sitting on a chair, performs cataract surgery on the eyes of a patient, the third for this morning.

In less than 10 minutes the procedure is over, the eye doctor winking and flashing the heavy metal hand sign for “rock on.”

It’s just another day in the life of an ophthalmologist—except that, in this instance, the doctor would be attending to a dozen more patients, many of them charity cases.

Lacsamana’s clinic is in Pampanga, the International Eye Center on the second floor of Robinsons Starmills, just off the North Luzon Expressway exit in San Fernando. But quite a number of patients have traveled by bus from Manila. Most of them are senior citizens.

The most prevalent eye disease among the elderly is cataract, says Lacsamana. He notes that some of those afflicted are also suffering from diabetes, although he has encountered children born with cataracts, whose mother probably had German measles while conceiving.

But how does one get afflicted with cataract?

“Cataract formation is a natural phenomenon because the eyes’ lens fibers are continuously produced every day, for life,” he says. “They don’t get discarded, unlike old skin. The fibers get stuck within the lens of the eyes. At age 60, the translucency of the lens is lost.” 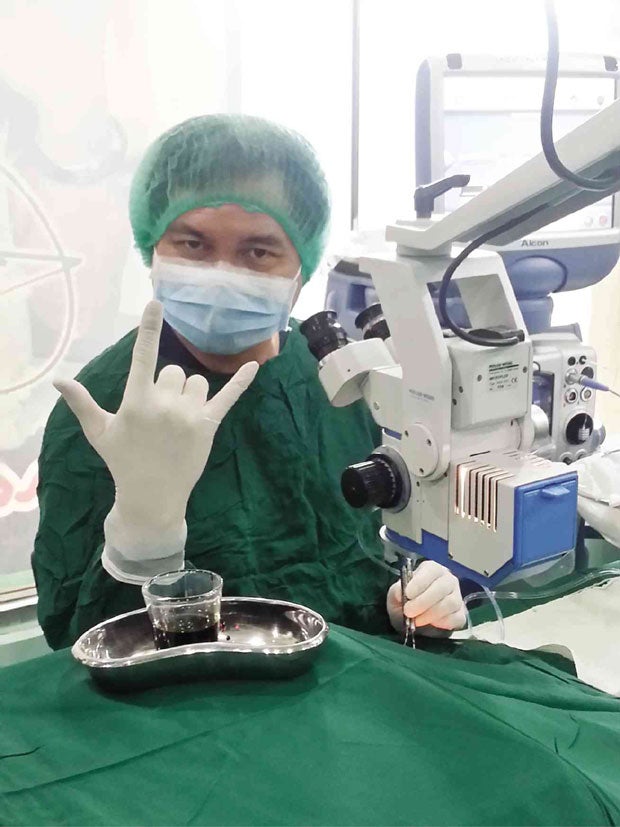 In the past, people would go blind because of cataracts. But these days, cataract surgery is done quickly, as fast as seven minutes, says the doctor, with no pain. “The patient lies down, wide-awake. Anesthesia is topical (no injections). There is a small incision but no stitch. The patient can go home immediately after the surgery. There is less stress, and less time for recovery.”

He adds that if the patient’s retina is intact, or there is no other eye disease, the chance of getting good vision is high.

With today’s technology, the intraocular lens is an improved version of the natural lens. The patient is able to see more clearly.

The new technology, says Dr. Lacsamana, became available in the early 1990s. “At St. Luke’s Quezon City I was the first one to do phacoemulsification (or modern cataract surgery) among private patients in 1993. It became my specialty.”

He says an eye doctor never stops learning. Every year he attends conventions and seminars to update his knowledge and skills.

“More than 60 percent of my patients are charity cases,” says the doctor. “Only the lens is paid at P500.”

In 1997 he opened his Pampanga clinic to serve his kababayan. But he says he was already doing a lot of charity cases while practicing at St. Luke’s. All these, for him, is payback because he went to medical school on full scholarship.

After cataract, the next most prevalent eye disease is diabetic retinopathy, he says. The symptom is blurred vision. The third is glaucoma, which is controllable but not treatable.

Dr. Lacsamana is always busy on most weekdays, but his sense of humor seems to make his workload lighter. He says there are two things a patient should not do, after cataract surgery:

Seriously, he says that the day after, the patient may already take a bath.

He recalls that, during his internship at the Philippine General Hospital, his seniors wanted him to become a heart surgeon because of his “fine, steady hands. Pero nakita ko yung mga heart surgeon laging galit, nagsisigawan, stressed out sila. Yung mga eye doctors laging nakabihis, ang linis tingnan. They always talk about pleasant things in life, ang gaganda ng girlfriends at kotse nila. This is the life I want, sabi ko. I thought they were making lots of money, only to realize, after graduation, na mayaman na pala sila talaga, to start with.”

He also dispenses advice on caring for the eyes during summer:

1. Avoid too much sun exposure.

2. Always wear sunglasses as soon as the sun is up till sunset, because the sun’s ultraviolet rays and infrared light can burn or cause blisters in the retina.

“It’s the same phenomenon when you expose your skin to the sun,” he says. “If there is sunburn, your eyes can also be damaged.”

There are also certain myths he wants to debunk:

1. “Washing your eyes upon waking up is bad. Hindi totoo yan.”

4. “Hindi kailangan ng exercise ng mata. The moment you open your eyes, they’re already working. Even while sleeping, the eye muscles are moving.”

But the eyes get tired, too, because they burn energy. “If your eyes are tired, they want to rest. Sleep is the remedy,” he says.

Log on to the International Eye Center homepage: iec.ph