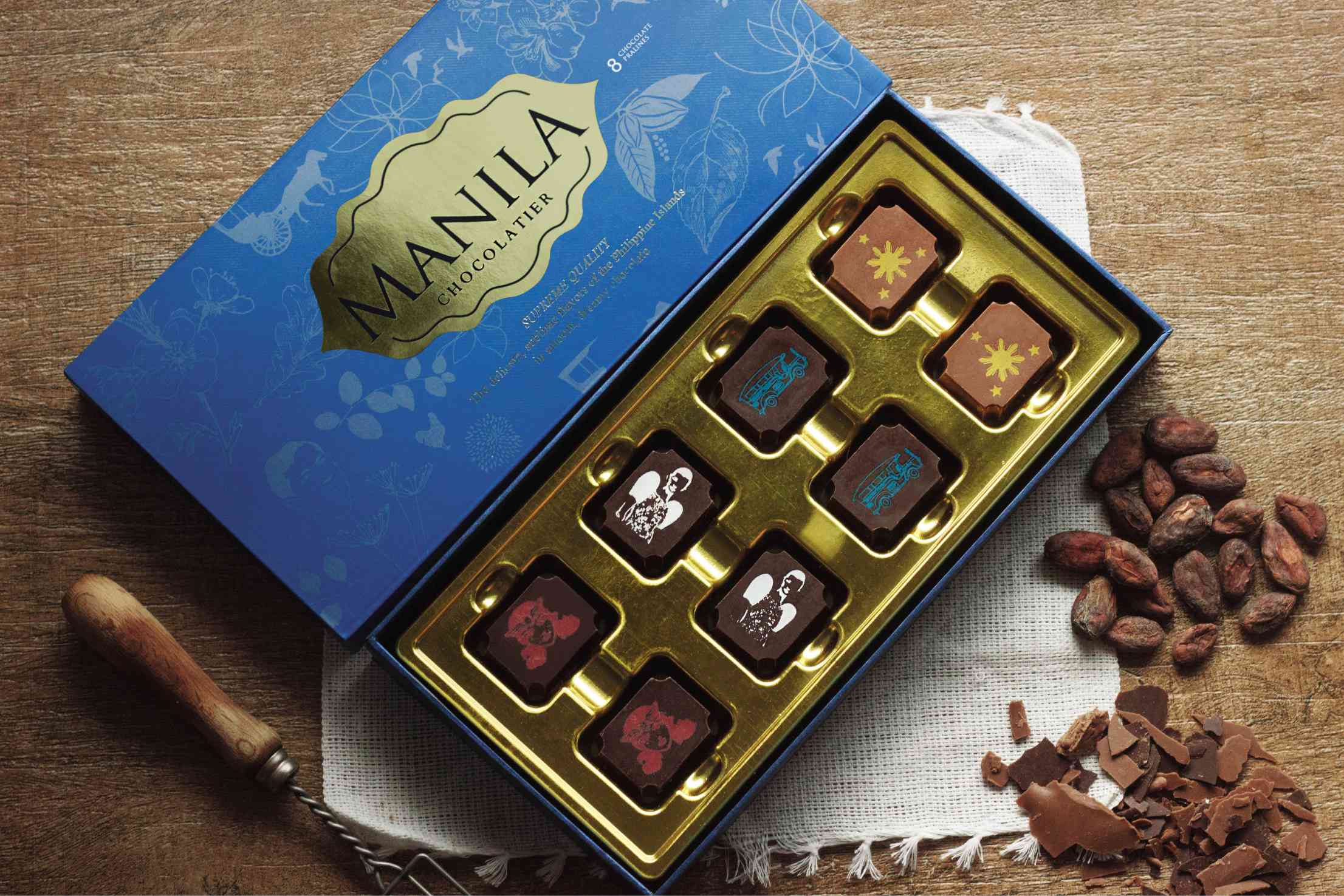 MATIAS’ artisan chocolatesmake an elegant souvenir or presents. Each praline is embossed with a cultural icon and filled with an exotic native ingredient

Driven by nationalism, chocolatier Raul Matias is taking his artisan chocolates to the next level. He recently launched Manila Chocolatier, which offers gourmet pralines infused with native ingredients and stamped with cultural icons.

Packaged in royal blue and embossed with a golden scalloped cacao pod, Manila Chocolatier has become the state gifts of such government agencies as the Department of Tourism and the Bureau of Treasury. The box contains various pralines filled with   mango puree, purple yam, pili nuts and native coffee called barako. The icons, made from colorful cocoa butter, are hand-drawn with care.

Each praline carries a story related to the provenance of its filling. The sarimanok praline, for instance, is packed with bukayo, strips of young coconut sweetened with syrup.

“From my research, I discovered that coconut is a staple of our Muslim brothers,” says Matias.

Meanwhile, to pay homage to the country’s Spanish heritage, the kalesa or horse-drawn carriage praline is stuffed with native custard, the leche flan.

Matias also derived inspiration from memories of his family farm in Pampanga. The nipa hut praline is stuffed with banana cue. He recalls that the  farm was littered with these huts where the workers ate their banana cue for snack.

The carabao praline with buko pandan harked to memories of coconut trees around their farm. The popular dessert from the farmers was made of sweetened coconut and fragrant screwpine leaves.

The beach praline is infused with calamansi. Matias recalls that when he would visit Boracay in the ‘’90s, the resorts usually offered calamansi juice as a welcome drink.

And from his childhood Christmas memories, Matias chose the native star lantern, parol, for the praline spiked with salabat, or ginger tea. The beverage always accompanied the steaming  rice cakes that Matias remembers eating after Midnight Mass.

Then there are the cultural icons such as Jose Rizal on the pili nut praline. “They are both very Filipino, that’s all,” says Matias.

The jeepney praline is loaded with caramel and muscovado. The ingredients are an homage to an American vehicle that was Filipinized.

“Caramel is American but we added the local flavor of panocha (unrefined sugar).”

The praline with the comic book heroine Darna is a mix of chewy nougat and caramelized muscovado. “She’s tough but soft like these ingredients,” says Matias.

His favorite pralines are the Philippine map crammed with purple yam.

“Ube comes from the soil, so why not put the geography,” says Matias. He also likes the image of the Dalagang Pilipina on the Palawan honey-filled praline, since “they are both sweet.”

Matias uses a mix of chocolates from the Philippines, Indonesia and South America. He says that the criolo chocolate bean from Venezuela is the best.

“Everything has to do with the soil and the climate,” he explains.

These chocolates can last six months as they are maintained by natural preservatives, and don’t contain artificial preservatives such as potassium sorbate and sodium bicarbonate.

Trained as a physical therapist in New York, Matias took up chocolate-making as a passion. He named his first brand of artisan chocolates after the Italian philosopher-politician Niccolo Macchiavelli after reading “The Prince,” a book on power.

He sold traditional flavors in the US before coming home six years ago to try his luck in the Philippines. While maintaining the Machiavelli brand, he took a different approach to chocolate-making by combining European chocolate with exotic components.

His creations include novelties such as creamy bars with Malagos cheese from Davao and ras el hanout, a Moroccan spice made of a motley of ingredients; also guava paste, jasmine, mangosteen, green tea, Iranian pistachio and lychees. Matias churns out thousands of chocolate variations daily—from crackly bars of chocolate with bacon to mung bean bonbons and dragées that coat native cashews.

Inspired by the Department of Tourism’s “It’s More Fun in the Philippines” campaign, Matias wrote to Secretary Ramon Jimenez Jr. expressing his desire to contribute to the advocacy of local chocolate-making. Jimenez told him chocolate was a no-brainer souvenir. After 18 months of research, Matias came up with Manila Chocolatier, because the name is synonymous with the Philippines. A box of 15 pieces is priced at US$28.

“The walis tambo (native broom) will always be there, but Filipinos now have more sophisticated alternatives for a souvenir,” says Matias.