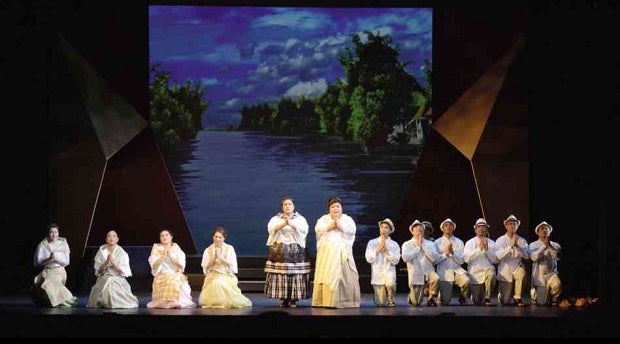 AROUND 80 actors divided into two alternate groups are expected to be part of “Noli Me Tangere: The Opera” when it opens in September at Resorts World Manila’s Newport Performing Arts Theater

NY production of ‘Noli Me Tangere: The Opera’ comes to Manila

As the three-day run at Kaye Playhouse drew near, Sibal was growing anxious. On the other hand, Lewis, passionate in her desire to showcase Filipino talent and culture through the “Noli” opera, was keeping her hopes up.

When the curtains closed in October last year, the producers heaved a sigh of relief. The opera adaptation by National Artist Felipe de Leon of Dr. Jose Rizal’s novel, with libretto by National Artist Guillermo Tolentino, proved to be a sold-out hit among Filipinos and Americans as well.

With its success, Lewis and her team decided to mount an even bigger production. This time around it will be held at Resorts World Manila’s Newport Performing Arts Theater in September, accompanied by a full orchestra.

It has been two decades since “Noli Me Tangere: The Opera” was last staged in the Philippines with a full orchestra. Dulaang UP had a scaled-down production in 2011 and 2012, using two pianos as accompaniment.

In addition, “Noli Me Tangere: The Opera” will have 21 performances, which, according to director Freddie Santos, is quite unheard of in the opera world.

Santos, who watched the last time the opera was staged in the country with a full orchestra, says he is trying his best to forget the book so he can approach the material head-on and see what can make it work better.

“The material was written in 1957. Back then people were used to watching (performances) for long hours,” Santos says. “We’re trimming it to make it more palatable. Instead of three acts, we’re redividing it into two acts. In that sense, it achieves a more contemporary form.”

Santos, however, points out that the arrangement remains the same, though crisper and tighter.

“As far as staging goes, we have only one purpose—to make the story as clear as possible, so it becomes historically accurate and emotionally powerful at the same time,” Santos says.

As for the opera’s set, Sibal says it will feature a more traditional look, compared to the New York run for which he did a modernized set.

“I’ll stick to the old houses and introduce architectural details so that the audience will understand our rich history and culture,” he says.

The sheer number of the cast means more than a hundred costumes are needed for the opera—a daunting task that falls on Sibal’s lap. He says he’ll be using abaca and piña incorporated with Italian damask to create the Victorian-inspired costumes.

“It would be like a fashion show,” he promises.

Will he collaborate with Filipino fashion designers? “Yes,” he says, “but we’re still doing interviews with some of them.”

After the Manila run, Sibal says there is a plan to transform the opera into a touring production—with planned performances in Austria, hometown of Rizal’s esteemed foreign friend Ferdinand Blumentritt; Germany, where “Noli Me Tangere” was published in 1887; and Spain, the country’s colonizer for more than three centuries.

Executive producer Edwin Josue knows too well the challenges the production will have to hurdle. “People would say, ‘ay, opera, matutulog lang kami dyan,’” he notes. Despite this, the team is determined to push through with the project, because “we believe that through this, the Filipino youth here and abroad will see that there is a cultural heritage that we should preserve and be proud of.”

Part of the proceeds of the opera will go to the preservation of the original copy of “Noli Me Tangere” in the National Library, as well as assistance to Supertyphoon “Yolanda” victims and scholarships for opera singers.