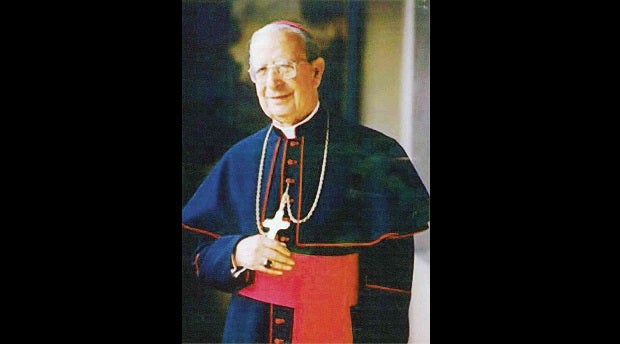 On St. Peter’s Square last April 27 after the canonization of Popes John XXIII and John Paul II, Father Vicente Robles, parish priest of Sto. Cristo and  St. Andrew Kaegon Church in Bocaue, Bulacan, gave Pope Francis a letter asking for his apostolic blessing on the late Bro. Richie Fernando, a Jesuit scholastic, who died in Cambodia on Oct. 17, 1996 trying to save the lives of disabled children from the grenade thrown by a troubled student.

Fr. Vic also gave the Pope the book on Bro. Richie written by the late Businessworld publisher Raul Locsin in 1997.

In his letter, Fr. Robles said that Brother Fernando was a Filipino Jesult scholastic assigned during his regency to work in Cambodia in a technical school for landmine victims.

“On Oct. 17, 1996, Sarom, one of the students, threatened to release a hand grenade after being asked to leave the school. Richie tried to save the students and wrestled down the angry student. When Sarom finally dropped the grenade, Richie fell over it to save him, dying while still grasping him tightly in his arms.

“Four days before his death Richie Fernando wrote to his friend, Fr. Totet Banaynal, SJ: ‘I know where my heart is, it is with Jesus Christ, who gave his all for the poor. The sick, the orphan… I am confident that God never forgets his people: our disabled brothers and sisters. And I am glad that God has been using me to make sure that our brothers and sisters know this fact. I am convinced that this is my vocation.’”

“I pray that Richie T. Fernando, SJ, be recognized one day as a Saint in Heaven as Model of the Youth, Bravery, Hope and Love,” Fr. Robles wrote the Pope.

The “miraculous intercession” of Brother Richie, Fr. Robles told me, was manifested on two occasions: An 18-year-old student of UST was hit by a speeding motorcycle and thrown against a wall. She fell into a coma and the mother called Fr. Vic and asked him to pray. Fr. Vic and the mother went to the hospital.

Fr. Vic placed the prayer to Bro. Richie on the pillow of the sick girl. The girl opened her eyes. She got well and went on to pursue her architectural course.

The second case was when a 7-year-old girl needed surgery to cure her heart problem. Fr. Vic and the mother prayed to Bro. Richie. The girl was cured and is now 13 years old.

The body of Bro. Richie Fernando is buried at he Sacred Heart Cemetery in Novaliches, Quezon City. There is will be an 18th anniversary Mass at the Jesuit Retreat House there.

The Opus Dei community all over the world is preparing for the September beatification in Madrid of Venerable Bishop, the successor of St. Josemaria Escriva, founder of Opus Dei.

Madrid was where Bishop Álvaro del Portillo was ordained as a priest.

Bishop Portillo had participated in the Second Vatican Council and worked in several departments of the Roman Curia. He also advocated the installation of the mosaic of the Virgin Mary that crowns St. Peter’s Square which was dearly admired by St. John Paul II.

This Sept. 20, a group of Filipino pilgrims, mostly Opus Dei numeraries, supernumeraries and cooperators, will witness the beatification. Included in the itinerary are visits to cities of Spain, Portugal, Italy and the Vatican.

It is organized by Adam’s Express Travel, the pioneer in pilgrimage tours a very big delegation of pilgrims to the canonization of Pope John Paul II and Pope John XXIII.

Another group will go to Morocco, Alhambra in Spain and Fatima, Portugal.

Devotees of Ina Poon Bato or Apo Apang who cannot go to Botolan, Zambalez can now go to the Manila Cathedral on May 31, 5 p.m., for the enthronement Mass by Luis Antonio Cardinal Tagle.

Founding president Roselynn Magsaysay of the Ina Poonbato Global Community said the ceremonies will be highlighted by the floral offering to the Blessed Mother by devotees and members of the different Ina chapters.

The feast of “Apo Apang” falls on Jan. 24. Roselynn Magsaysay has been promoting the devotion for 30 years now.

The revered image of the Sto. Niño de Cebu will be honored with a High Mass today at 6 p.m at the San Agustin Church celebrating the 450th anniversary of the finding of the image in Cebu where the Basilica stands.

The Augustinians who take care of the image coordinated the visit with the City of Manila and the Intramuros Administration.