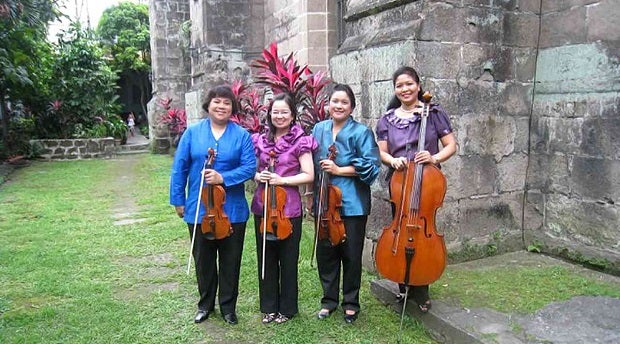 And, apparently, so do the ears.

How else can we explain the continued popularity of baroque one-hit wonder Johann Pachelbel’s “Canon in D” as wedding music?

In popular wedding venues such as the San Agustin Church or the Manila Cathedral, where multiple weddings are often held on any given day, the entrance of the bride is inevitably accompanied by Pachelbel’s stately opening theme.

It has even eclipsed Wagner’s “Bridal Chorus” from Lohengrin (more commonly known as “Here Comes the Bride”), for decades the reigning champion in wedding music.

Blame it on Hollywood.

Ever since it was used in the wedding scene in “Runaway Bride,” and subsequently in “The Wedding Planner,” “Wedding Crashers,” the Korean hit rom-coms “My Sassy Girl” and “The Classic,” and scores of other movies, Pachelbel’s “Canon in D” has been inescapable.

Written sometime in the 1680s by German composer Johann Pachelbel, the piece was only rediscovered by music scholars in the early 20th century.  The first recording of the “Canon” to gain popularity was in 1968, and was first used in a major film in 1980’s “Ordinary People,” an Academy Award-winning drama about a young man’s suicide and its aftermath.  (At one point, it became popular funeral music as well.)

Since then, however, Pachelbel’s “Canon” has been overwhelmingly associated with weddings.  Punters even took bets as to whether Prince William and Kate Middleton would be married to Wagner’s “Bridal March” or Pachelbel’s “Canon” (neither, as it turned out).

“Gasgas,” is how violist Michi Martinez, musical director of the Athenaeum String Quartet, describes it.

Now a professor at the University of the Philippines College of Music, Martinez started the quartet in 1986 with three classmates during her days as a music major.  At the time, an all-female string quartet was a novelty.

They named the group Athenaeum after the ancient Greek temple of learning when they joined the National Music Competition for Young Artists (NAMCYA), and it stuck, although people inevitably think they’re from the Ateneo.

“One time we were invited to play at De La Salle, just after the Archers lost to the Eagles,” she recalled.  “No one showed up.”

The current line-up, which has been playing together professionally since 1989, consists of Martinez on viola, Chona Noble on first violin, Jade Midoro on second violin, and Celia Narzo-Cañabiral on cello.

“Almost everyone in a chamber orchestra do what they call ‘commercial music’ on the side,” says Martinez. “They play regularly for events, mostly corporate events and weddings, and most of what they play is pop music.  But our bent with Athenaeum is really classical, both Western and Filipino, with just a sprinkling of pop standards.”

In fact, over the years the quartet has built up an impressive book of more than a hundred arrangements, about 80 percent of which are of classical pieces.

Almost from the beginning, says Martinez, they were invited to play at weddings.  In the beginning, before professional wedding coordinators became common, it was usually the couple themselves who booked the quartet, and chose the music.

In over 25 years of playing together as a quartet, Athenaeum has lost count of how many times they’ve had to play Pachelbel’s “Canon” at weddings. Specially after “Runaway Bride,” it has become the most-requested wedding piece of all time.

“We offer them different pieces as alternatives.  How about this piece by Bach?  Or the second movement from Vivaldi’s ‘Four Seasons’? Or even Mozart’s ‘Eine Kleine Nachtmusik.”

Although Athenaeum’s edge is in classical music, says Martinez, about 20 percent of its book consists of more popular pieces, such as jazz standards and Beatles songs arranged for string quartet.  Occasionally, they have had to learn a new piece if the couple really wants a particular song for their wedding.

“Last week I played ‘A Thousand Years,’ the theme from ‘Twilight,’ for a young couple’s wedding.”

Hold on, hasn’t the Vatican come out against the “Twilight” franchise (and for that matter, Harry Potter) for their “occult” content?

“Actually most churches don’t allow it if it’s sung,” says Martinez.  “But I did an instrumental version for viola, so the church allowed it.  If you do weddings you have to know which churches are strict about forbidden music.  San Agustin is one, Manila Cathedral, Christ the King in Green Meadows and Mary the Queen in Greenhills are some.  They will give you a list of permitted music.  Our edge in Athenaeum is that we do classical pieces.  Technically, Bach’s ‘Air on a G String’ and Mozart’s ‘Eine Kleine Nachtmusik’ aren’t sacred music, but usually if it’s classical the church allows it.”

(As a footnote, Wagner’s “Bridal March” was also frowned upon by the Church at one time as inappropriately secular music.  That didn’t stop it from becoming a wedding standard.)

Today, wedding planners have become de rigueur, and they can play a huge role in what music will be played at the wedding and reception.

“They have their pros and cons,” says Martinez.  “Not all of them know the range of good music, or appropriate music, so choices are limited.  But some wedding coordinators are sensitive to the artists’ needs; they’re not just out to make money out of the artist.  Those are the coordinators we want.”

That being said, weddings can be a source of much-needed extra income for the always cash-strapped professional musician.

“A professional string quartet can charge anywhere from P40,000 to 50,000 for a wedding, for two 45-minute sets,” says Martinez.  Anything lower can be considered a “friendly” rate.  This might seem like a lot, but wedding videographers can charge twice as much for their services, and the figure pales in comparison with what venues and caterers charge.

In the end it all depends on how important music is to the wedding ritual.  If not, might as well just play a mix CD.  But if you need to hear a particular piece of music, impeccably played by a professional ensemble, at the precise moment during the ceremony, then you need a group like the Athenaeum String Quartet.

As Robert Fink wrote in “Prisoners of Pachelbel: An Essay in Post-Canonic Musicology”: “Musick (sic) is emotional underscoring, a personal soundtrack to the most powerful scenes in the movie of your life.” •