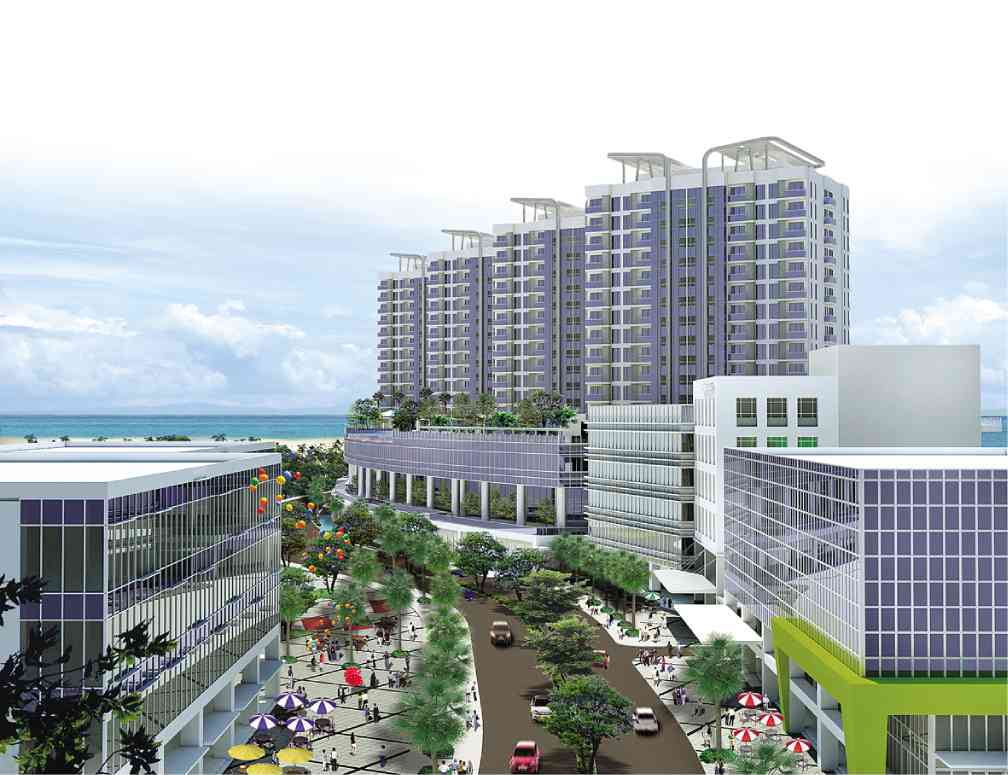 THE INVITING beach is seen in the landscaped areas throughout The Mactan Newtown.

Imagine owning a house by the beach or shopping in a sprawling, state-of-the-art mall by the beach. Or better yet, taking a stroll on the beach—after work.

Mactan Newtown in Lapu-Lapu City, Cebu, will turn such fantasy into reality. It is different from previous township concepts of Megaworld such as Eastwood City, Newport City, McKinley Hills and Forbestown Center.

“Everything can be enjoyed by the beach,” says Noli Hernandez, president of Megaworld Cebu Properties. “I don’t think other properties can offer the same benefits and features like having all you need in one place, plus a beach.”

Megaworld is investing as much as P30 billion to develop the 28.8 hectare Mactan Newtown in the next five to seven years. The property will house five hotels, a three-level shopping mall, a cyberpark, a school, 10 luxury condominiums, sports facilities and office towers for business process outsourcing (BPO).

Part of the development is the beachfront property where Portofino Beach Resort used to sit. The beach has spectacular views of the Hilutungan Channel and Olango Island, known for

its bird sanctuaries and mangrove forests.

“The beach vibe of Mactan Newtown will definitely make the township stand out among other mixed-use developments in Cebu,” says Hernandez. “We envision this township to be the next big thing to happen in Central Visayas.”

Given Newtown’s beachfront advantage, Megaworld is spicing up its pioneering “live-work-play-learn” concept with “live-work-play-learn and beach” lifestyle for township residents, workers in the office towers, retail partners and customers, as well as students and academic personnel.

Home by the beach

Living in a township makes life easy; everything is within reach. One doesn’t have to leave the place to work and play, thus, saving energy and carbon footprint.

Saving energy is just one of the many interesting green features of living in Mactan Newtown. It’s also a perfect way to declog traffic in busy Cebu City. “That’s the perfect expression of luxury —not having to travel one or two hours of your life on the road. It’s a privilege to not be late for work,” says Hernandez.

In Mactan Newtown, about 248 carabao mango trees line the Main Boulevard—following the concept of Megaworld chair Andrew Tan in his bid to promote environmentalism.

The Japanese-inspired 8 Newtown Boulevard will feature a wellness center and an infinity pool longer than an Olympic-size one, overlooking Magellan Bay. It will have a bonsai garden and an activity place for ikebana and origami sessions.

One Pacific Residence will showcase the active lifestyle. It will have a tennis court, a playground for kids, a promenade with water features and lounges for adults, a five-story

One Manchester Place will be for family-oriented activities. It will have a swimming pool with cabanas, play area for kids, daycare and business centers, and a game room. This tower will be near the beach.

The beachfront is less than 300 meters away from Mactan Newtown’s main entrance.

Work by the beach

The Cebu township already has two office towers (one housing the BPO One World Center) and will have at least five more by 2020.

By 2016, Megaworld will open the Newtown School of Excellence, an educational institution to be supervised by the Lasallian Schools Supervision Office, initially with primary level.

Among the first hotels to rise will be the Mactan Belmont Luxury Hotel and Savoy Hotel Mactan Newtown, both to be managed by Prestige Hotels and Resorts Inc.

“The hotels are local brands offering 500 rooms each,” says Carmen Fernando, managing director of Richmonde. “These will provide travelers a good stay in a township.”

Also to be constructed are two beachfront hotels and a luxury hotel with international brand. Megaworld will also build its own exclusive beach club and sports facilities for wake boarding.

“We are fast-tracking the developments in the township,” says Hernandez. “With the rehabilitation of the new Mactan International Airport and the expansion of businesses to Lapu-Lapu City, now the second fastest-growing urbanized city in the country after Taguig City, we see Mactan Newtown rising to become Cebu’s next central business district in the booming side of Mactan Island.”

Hernandez explains that Megaworld is not just persuading people to invest in its projects. It also seeks to foster economic growth in Lapu-Lapu City and Mactan Island.

Based on data from the Department of Tourism, about 900,000 tourists visited Mactan Island, 75 percent of whom came from 63 different countries.

Megaworld is also constructing a three-level lifestyle mall, Plaza Magellan. The mall will have an iconic entrance plaza facing the famous Lapu Lapu Shrine, the site of the historic Battle of Mactan between Lapu Lapu and Ferdinand Magellan on April 27, 1521.

The plaza’s main feature is a life-size Spanish Galleon Victoria, a replica of the first vessel that circumnavigated the globe carrying Magellan and his men, and the Spanish Steps which will lead visitors to the mall’s main entrance.

Plaza Magellan will have a museum dedicated to the life and expeditions of Magellan.

Megaworld is closely coordinating with the National Historical Commission of the Philippines for the improvement of the historic national shrine.