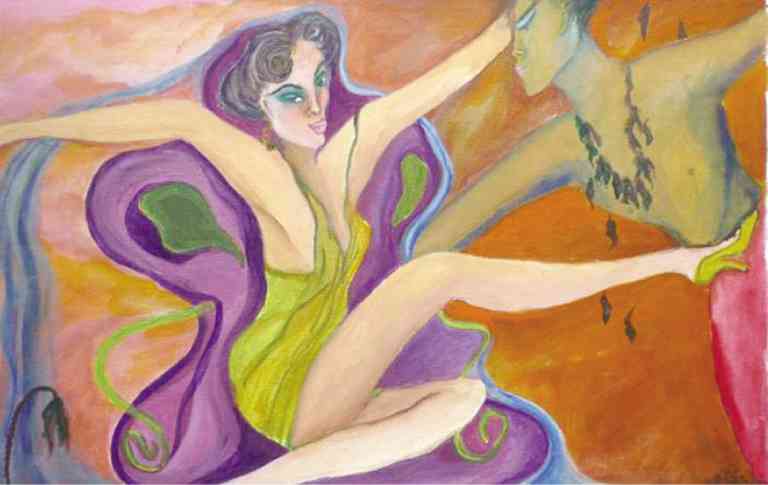 We had no plan to shop.  The trouble was Jet and Robert, my two best friends, and I chose to lunch at Bellini’s in Cubao. (Bellini’s is open forever, rain or shine, with the white-haired Italiano kissing all the ladies, old or young.) We ordered their great antipasti of fresh marinated anchovies, red and green olives, chopped broccoli, roasted eggplant and a plate of pasta.

Naturally, the next step was to drop by the two junk shops at the end of the lane. Of course, Jet immediately found phonograph records of Bing Crosby that he liked. He bought a really nice antique kerosene lantern for P600. He spotted an old movie still of Alessandra de Rossi in some film where she got an award. I bought a bright green drinking glass that looked like cut glass but was actually plastic, for P150. I liked it.

We drove through Kamuning Street, which is a very tempting route because you can stumble on a lot of antique shops there. My favorite was the one that sells everything at 25-percent off, so of course we had to look in.

Jet likes to spend money when he has worked so hard all week. It makes him feel it’s worth working so hard. He sat on the wrought iron swing with canopy outside the shop, thinking to buy it for his restaurant, Van Gogh is Bipolar. I loved the carved wooden tiger beside it that used to be part of a carousel but didn’t know what I’d do with it.

Jet, Robert and I went inside the antique shop.  Everyone knows that not everything is old in an antique shop. This one has an assortment of old and new that is exquisite. Jet bought a cut-glass lamp that looked like a pineapple with crystal teardrops encircling it. He bought a piña lampshade without a base. He bought an amber hanging lamp of glass. I couldn’t resist a set of charming pink antique drinking glasses with embossed design, and I bought six.

Robert woke up and bought a big, brightly colored ceramic hen and a smaller rooster. I wanted to ask him what he wanted to do with such corny décor. But he interrupted my thoughts by telling me that he bought them to use as molds (called taca) for making papier-mâché roosters and hens.  Robert said it was cheaper than ordering a hardwood mold to be carved in Paete.

Robert wanted to teach the cook’s children how to make papier-mâché hens and roosters so they wouldn’t be at the computer game shop all the time. They could make some money instead. Robert bought a masculine-looking lamp with a black shade for his desk that looked like something Sherlock Holmes would use. Then he rested his back on the counter and looked bored again.

A plump guy in white entered the shop.  He was carrying big sharp scissors which he quickly tucked into his front pocket. I thought he might be a hairdresser or something. Jet kept on pointing at things he still wanted to buy. The guy with the scissors went all around the shop. Then he put four white coffee cups he had chosen on the counter. He started heatedly arguing with the salesgirl.

He wanted to know why the matching saucers were double the price of the cups.  It was illogical, he said. It was insane. The flustered salesgirl kept phoning the manager to ask for the last price of the saucers and then for the last, last price. They were still more expensive than the cups. The guy with the black scissors was losing his patience. He marched out of the shop. I thought I could detect smoke coming out of his ears.

Jet was haggling over another lamp.  When the salesgirl wouldn’t lower the price, he bought it anyway. He asked for a freebie, because he had bought so many things. He chose a miniature with mirrors and tiny drawers. He pointed out a crack at the edge of the boudoir of a drawer and they gave it to him for free.

The guy with the scissors came back into the shop, transferring his sharp black scissors to his other front pocket. I could see that he was still sore. It was a very hot day.  If he gets more emotional, I thought, he might just stab everyone within reach.

Surreptitiously I stole out of the antique shop. I sat outside on one of the wrought iron chairs on display, where it was safe. I made sure I was within easy reach of my car door.  I told the driver to keep it slightly open so that my friends could just jump in should there be any bloodshed.

I didn’t know what happened inside. But soon Jet and Robert were calmly piling their purchases at the back of my car. There were lots and lots. They seemed to be completely unaware of the danger they had narrowly escaped.

Eventually, I left them at the famous Van Gogh is Bipolar, which is the quirky restaurant that first gave the compound on 154 Maginhawa its fame. I decided to drop by a corner tea shop called Antiteasis. I had always been curious about the place because it had a lot of books that young people were reading on cushions strewn all over the floor. I wished there had been something like that when I was young. It had only one server, and she looked distressed about the world.

I found out that the owners were two sisters named Karil and Kalila and who, if I’m not mistaken, are grade school teachers.  A big shelf is full of books to read for free, and the bottom shelves have kiddie picture books and children’s board games.

I wanted to make the waitress feel better, so I ordered a pot of their most expensive tea and gave her a handsome tip. I made her promise to help me up, because the moment I plopped down on the floor I may never make it up again.

A nice fellow named Daniel was sitting on a high stool. I sank down beside a girl wearing large sunglasses who turned out to be his girlfriend.

The young girl to my left was drawing fashion costumes on her pad. Next to her were a boy and two girls happily playing a card game called Uno. All you can order in the place is tea and you can stay there all day, nursing your cup and lolling all over their cushions. I wondered how they could make money.

I wished them well because most places in the 153 Maginhawa Street compound are now doing pretty well, including that attractive new bar with a real jeepney perched on its roof called—guess what?—Jeepney. Thanks to the property owner Sana Sta. Ana who broke ground by allowing some wackiness to bloom in her compound—the best thing that ever happened to Maginhawa Street.

After I finished half of my tea, it was time to get up. Two guys pulled me up by the arms and the waitress hoisted up my fanny.  When I was on my own two feet, everyone clapped.