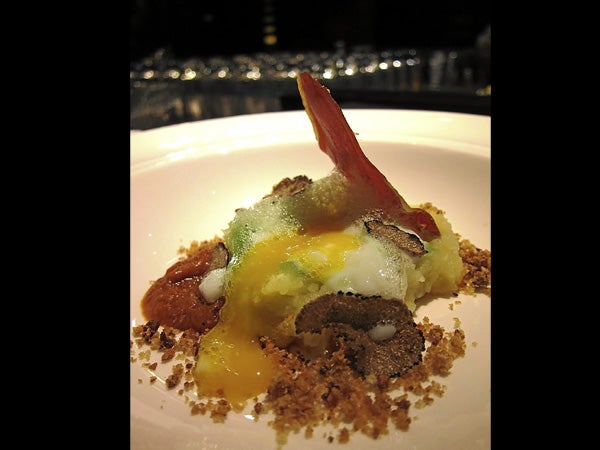 Finally Tonyboy Cojuangco gets it right.

In recent years, the gazillionaire restaurateur gave us two beautiful restaurants: La Regalade on Pasay Road, boasting of the cooking of Michelin-acclaimed French chef Alain Raye, and Lolo Dad’s Brasserie at the 6750 building on Ayala Avenue that showcases the creations of multi-awarded chef Ariel Manuel of Lolo Dad’s fame. Both offered exceptional food on better days but had the consistency of a whimsical mademoiselle and prices that only Mr. Cojuangco could well often afford. The result: mixed reviews and a likewise whimsical clientele. Some days full, some days empty.

Now the Cojuangco-Manuel team is presenting something that does not compromise on taste yet remains well within reach of foodies on a beer budget. Forget Paris, hello Asia! Phat Wong presents recipes that bring Asian influences together, a kind of United Nations of Asian cooking.

Adobo and menudo are served but in siopao buns. Here the buns are deep fried for a crispy effect. The pad thai is dark and oh so full-flavored. The Hainanese chicken is flown in from Hong Kong and is yellow, not the usual white ones served in some restos here. The fat is superb.  Mami is served… with duck. They also offer baby back ribs, but for that Ariel Manuel twist, it is a tocino. Kilig to the bones, give or take a few teaspoons of vinegar.

And Opus presents Carlo Miguel, sexified to a cult following by “The Biggest Loser” reality show but better known for his kitchen prowess from Mezza Luna to Sala to Opus. Expect traditional concepts executed in non-traditional ways. A foamy eggs benedict; a perfumed martini; sous vide steak. Come with an open mind and a deep pocket.

Traditional Italian cuisine is making a comeback. Margarita Fores once again demonstrated that she is the Queen of Italian Cuisine in the Philippines at the TraveLife Italy event held  in September. But two Italian restos have been gaining popularity: First is Tiziano Cavallini’s Dolce Vita in Manila. Mr. Cavallini, an Italian from Modena, Italy, is reputed to have served no less than Queen Elizabeth and opera legend Luciano Pavarotti. The restaurant is getting known for its thin crust Quattro Formaggi which offers mozzarella, taleggio, gorgonzola and blue cheese as its fab four.

The other Italian restaurant is Joey Velardi’s Casa Nostra on Pasong Tamo, with Venancio San Juan in the kitchen. Note that this is “casa” with an A, different from Malate’s Cosa Nostra. Gaining popularity by word of mouth and a strong online presence, it’s been receiving raves for its  osso bucco, pizzas and homemade ravioli. 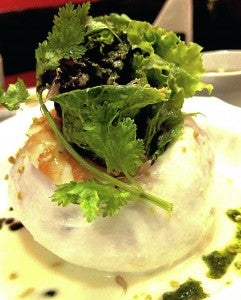 Making a comeback are two chefs who were temporarily missed. Fans of Je Suis Gourmand are happy to note that Marc Aubry is back with Champetre at the same location. The French word for “country,” the restaurant seeks to offer a rustic ambiance in the urban jungle that is The Fort.  Old Je Suis favorites have been maintained, such as the duck foie gras terrine and Portobello mushrooms with eggs en cocotte. Even better, Aubry’s well-loved pate, jams and sauces, are now in take-home bottles.

Meanwhile, Him Uy de Baron has opened Nomama Ramen in Quezon City, a sparse space with a puritan feel that serves Japanese cuisine with an international character. Aside from the classic ramen, there’s a green curry ramen and  a chili tofu ramen. This should at least be worth a curious visit.

But the best comeback is that of Casa Marcos, which had such a great reputation in the resto-days of yesteryears. I think the new batch of senior citizens, with brand new discount cards on hand, will be pleased at the revival.  I hear the steak a la pobre is just as good as it was back then. At least that was the verdict from our parish church’s Sexy Seniors.

Deli lovers can grab a sandwich at Kat Kuhn-Alcantara’s Chuck’s Deli in Serendra. Most humorous on the menu is the “Faking Duck,” because it’s actually a pork sandwich. The deli is known to serve mighty fine sandwiches, including a spicy buffalo chicken sandwich and Reuben slabwich on 10-inch ciabatta. Meanwhile, dessert lovers must finally visit Sweet Bella and have a slice of Cristina Rivera’s gourmet chocolate cake and Strawberry or Mango Charlotte.

And that’s the resto-wrap for this month. As the Sunday Inquirer is now a monthly instead of a weekly, this resto list should keep us chewing until Halloween. Happy eating, everyone! And advanced Happy Halloween!