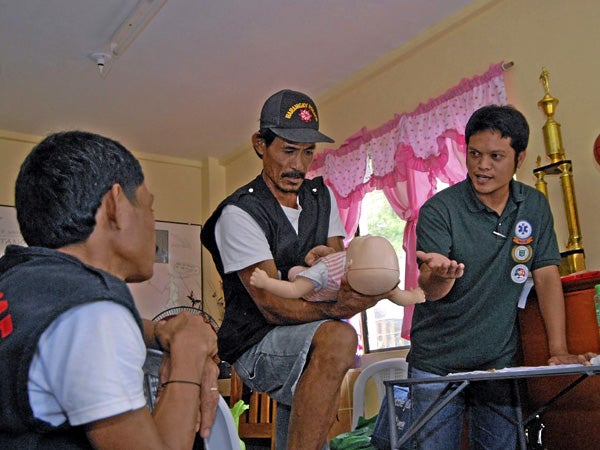 The basics: Even barangay officials get training on child care and life support systems, as in this case in Pilar, Sorsogon

Charts, graphs and tables may do well to record and report the success of a program meant to uplift lives in a rural community.  But they do not tell as exciting a story nor present as vividly colorful a scene as a lively gathering of women of diverse ages, in various stages of pregnancy.

Occasionally accompanied by their husbands – who are encouraged to attend so they can learn a thing or two and show support for their women – the mothers-to-be meet in a room at the municipio, in a covered court or even in a shady clearing within their neighborhood.  For some, these meetings constitute their first lessons on pregnancy, childbirth and motherhood, and the importance of basic prenatal health care.

In Dao, Capiz, such gatherings, aptly called “Buntis Congress,” are facilitated by NBA teams, the Nanay Buhay Alagaan volunteers and health workers who discuss maternal and child care services that pregnant women can avail themselves of, and offer tips on breastfeeding and infant care. Not surprisingly, the Buntis Congress has resulted in more frequent prenatal visits and hospital deliveries.

Dao is one of nine “cohort municipalities” engaged by the Zuellig Family Foundation (ZFF) in the implementation of its Health Change Model that trains local government units to strengthen their health care system down to the barangay level.

The ZFF program is participatory and involves changing the perception of health care in local government units.   Under the  “Health Leaders for the Poor” program, local chief executives, municipal health officers, and civil society leaders receive training on how to set aside a health budget, manage health care centers, and inform people on the need to  consul doctors when they get sick.

Aside from the “Buntis Congress,” the Foundation also addresses other health management concerns through a pregnancy databoard, a program for better nutrition, the Food Always in the Home (FAITH) and a program to access cheap medicines.  Grants to   improve the communities’ health care facilities are also provided.

Dr. Tonyboy Faraon, director of ZFF, said the Foundation chooses municipalities whose government leaders are committed to carry on the Health Change Model and are willing to turn them over to the next leader to make it more sustainable.

“ZFF will continue to envision itself as a catalyst in achieving better health outcomes for the poor, especially in rural areas by improving local health systems,” Faraon said. “Hopefully, we’d be able to expand our coverage not just in terms of geography but also in relation to the kind of work we do that impact health, such as education, livelihood, water and sanitation, nutrition, and information technology.”