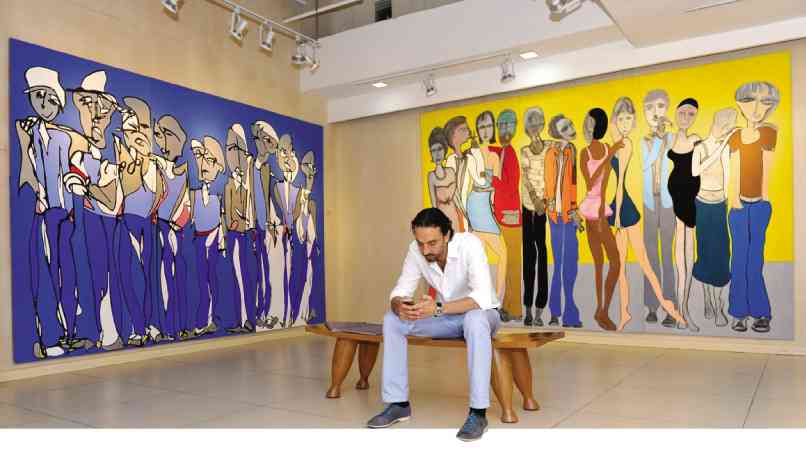 ALEXANDER Charriol taking a breather from his art show

A Charriol makes a name in fine arts

The large-scale paintings showcased the young painter’s deep engagement with the human condition.

As I looked at his works, it was evident that Charriol’s works reflected his extensive travels and deep interaction with different cultures around the globe, palangga.

Charriol described his works as “expansive canvases, mixed-media works in pastel colors are dominated by somber and inquisitive figures, either clustered in crowds or solitary with

nuanced distance between each silhouette.”

Checking his other artworks, I can imagine figures in a crowded train, bustling down a city street or perhaps chilling in a nightclub.

“The whole range of emotion involved with human interaction can be seen—anxiety, bliss, familiarity and anonymity brim in these situations,” he explained. “The work may be autobiographical, but it is overwhelmingly universal—a visual poem that tackles the entangled nature of who we are.”

Like his previous exhibition in Manille a couple of years ago, which I was lucky enough to view, Charriol’s “Human Flow IV” seemed to ask the viewer “to excavate what is organic versus what is conflicted when people come together in daily life,” as the artist put it.

Our town’s who’s who in the art world and alta sociedad were present, dahlings, including National Artist Arturo Luz, Betsy Westendorp and glass sculptor Ramon Orlina.

In college in the States, I used to wear Original Penguin. So I’m glad to hear that the US brand is back in Manila.

Penguin issued its cool Pepsi Collection in the launch called “Live for Now.”

During the event, there was a graffiti wall design, in which guests used a device to digitally make their own graffiti on the 8 x 12-ft screen. The wall was the crowd favorite.

The Instagram booth printed out all photos with hashtags #PenguinXPepsiPH and #BeAnOriginal.

The face-painting kiosk and play corner were also a big hit. In the latter, guests took part in a friendly competition over tic-tac-toe, football and oversized Jenga.

Of course, the big star of the night was Penguin, which unveiled a parade of colorful fashion pieces, truly a breath of fresh air in the fashion world, dahlings.

SM Store brought together a fab collection of women’s fashion labels in its house during the show titled “SM Woman,” natch!

Before the event, SM Woman business unit head Grace Lee Rivera told the audience: “Styled after the emerging global mega brands, this retail giant gathers all its labels under one name: SM Woman. With this move, SM Store hopes to fully integrate its unique presence and approach to women’s fashion in the minds and lifestyles of its shoppers.”

She added that the fashion house would “take women farther than they ever imagined.”