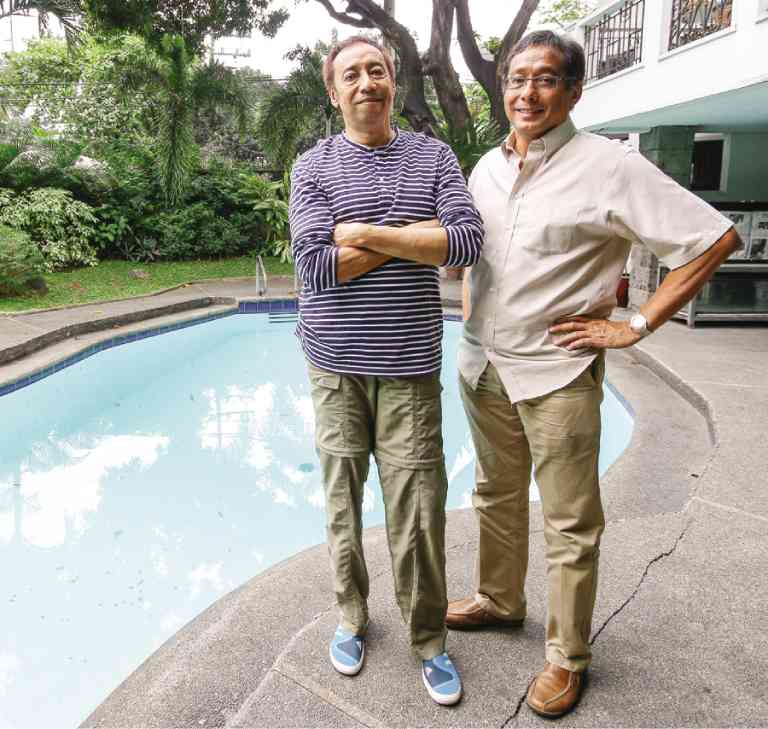 He may not be as famous as his three older brothers—Danny, member of the legendary musical trio The Apo; Sandy, founder of the popular lechon manok chain Andok’s and mayor of Javier, Leyte; and Dyords, versatile entertainer and one-fourth of the well-traveled quartet Angfourgettables—but Jimmy Javier is certainly as accomplished, and his Kuya Dyords couldn’t be prouder.

When the younger Javier cites his supporting role in Mike de Leon’s critically acclaimed film “Batch ’81” as one of his career highlights, it is Dyords who mentions the part about Jimmy earning nominations from both the Urian and the Catholic Mass Media Awards for his first-ever acting assignment.

It’s also from Dyords that we learn about Jimmy’s achievements in sports, both as a coach and player. After leading his alma mater, the Ateneo High School, to a first-time gold medal in the high jump in the 1972 NCAA, he did the same for the seniors volleyball team in 1976.

“I’m supposed to be the lawyer in the family,” Jimmy says sheepishly, then deadpans, “When our mother found out I passed UP law school, she cried—because she thought she was done putting all her five kids through school.”

To free her from the expenses, he supported his education. Once upon a time, he was  DJ “Sneakers” on DZRJ, and then a commentator for the UAAP from the mid ’90s to 2000 until a network giant took over, signaling, “the start of the demise of my sportscasting career,” he concludes with a grin.

It’s not that this soft-spoken, self-effacing fellow downplays whatever he does; it’s just that he’s more in awe of others. “Idol ko ’yan,” says Jimmy of the brood’s only sister, Cecilia, who took on a series of odd jobs after she worked for the Philippine Embassy in Washington, DC, until 1986.

Of Sandy, who in 2010 became mayor of the fourth-class municipality named in honor of their grandfather, retired Cebu Normal School principal, Daniel Falcon Javier, Jimmy is all-praises for Sandy’s hands-on and results-oriented leadership style. “Bilib ako sa kapatid ko,” says Jimmy of Sandy, now head of the League of Municipal Mayors. “He’s not the type to ask for help, but he will literally move things to get things done.”

That’s where the kid brother comes in. Having worked as acting legal officer for the Ministry of Finance, and then former chief of staff for Sen. John Osmeña, Jimmy makes an ideal right hand man—though he prefers to think of himself as “first and foremost a brother” to the mayor. Blessed with infinite patience and an eye for detail, Jimmy knows that pitching programs and following up requests for support are tedious tasks. “But it’s a process I’m interested in because you find out which agencies in government are efficient—and which ones  don’t care whose lives are affected by that piece of paper you’re trying to get approved. That’s my challenge,” he says with a smile, “and it never gets boring.”

Still, no challenge was greater than November 2013’s Supertyphoon “Yolanda,” whose maximum sustained winds of 315 km/h and fast-rising storm surges resulted in unthinkable death and devastation, particularly in the provinces of Leyte and Samar. Javier, located some 73 km south of Tacloban, was not spared.

Reliving the catastrophe through his personal photos and videos of “Yolanda,” Jimmy pegs the storm’s damage on Javier at 80 percent. “The wind was something else, it was terrifying,” he recalls somberly as he watches a video of himself announcing that their evacuation center had just lost its roof. “I started praying when part of the roof of the place where I was staying was being ripped out. What came out of my lips was, ‘Lord if we survive this, and our leaders survive this, please give us the strength to help people who can no longer help themselves.’”

Preparations for “Yolanda” began days before, with Mayor Sandy in Manila requesting for relief goods in advance from Tina Monzon Palma, veteran broadcast journalist and program director of ABS-CBN Foundation’s Sagip Kapamilya. The next day he and Jimmy were back in Javier, urging locals to evacuate. If you don’t leave, warned the mayor half-jokingly to people, I’m going to arrest you for attempted suicide. In a town of 6,100 families, three deaths were reported in the aftermath of the storm.

Once the weather improved, the brothers used their chainsaws, payloader, and other heavy equipment to lead a 60-man convoy to Tacloban for relief goods. By then, the roads were an eerie sight, a tangled mess of fallen trees, parts of homes, electrical posts, and dead bodies. With so much debris to clear, a 15-minute drive from Javier to the main highway took five hours; to get to Tacloban City, an otherwise 50-minute trip was reduced to a 36-hour crawl. On the way, Jimmy learned of a birth in one ambulance and a death in another. Even while in a daze, he still managed to offer some comfort.

The details-oriented man also kept family and friends posted on Javier’s goings-on through his meticulous updates on Facebook. Having witnessed the world’s worst storm ever to hit landfall, Jimmy was understandably critical of foreign media’s coverage of “Yolanda.” “Please do not broadcast our catastrophe through the mindset of your privileged American eyes and amplify ineptitude rather than effort with meager resources,” he wrote. “My country needs help, not denigration.”

Like the scores of victims traumatized by the calamity, he, too, was made to undergo a debriefing. Go to a place that’s “normal” was the recommendation, do something that you like to do. Jimmy turned to his passion for bird photography.

Months after Yolanda’s wrath, Jimmy—and Javier—are moving forward. Power and communication have been restored since the start of the year. Homes and schools are being built. Thanks to his Facebook updates, pledges from big corporations, nonprofit organizations, and private donors “too numerous to mention” have been pouring in.

Jimmy, in fact, was in the middle of “donor hospitality” during this interview, entertaining a group of Dutch nationals who were in the country for a few months to extend assistance to Javier.

Indeed, the town—so off the beaten path, only drunks, jokes Jimmy, would make the mistake of dropping by—is actually brimming with potential. The mayor’s plan to transform the rural community into a central business district is already underway. And given its rich biodiversity, Jimmy has made it his personal advocacy to convert as many as five barangays into wildlife sanctuaries.

“We’re rooted in the place,” he reasons of the brothers’ efforts to elevate the lives of Javier’s citizens. “When you come from a town named after your lolo, you just want to do things well.”

Like his brother Dyords, grandpa Daniel would be proud, too. Relishing the memory of locals cheering and breaking into poem after electricity was restored in Javier, Jimmy reflects with characteristic humility, “Having seen what can be done even in the face of the worst adversity, you just have to count your blessings—and realize the impact of your actions on the lives of others.”