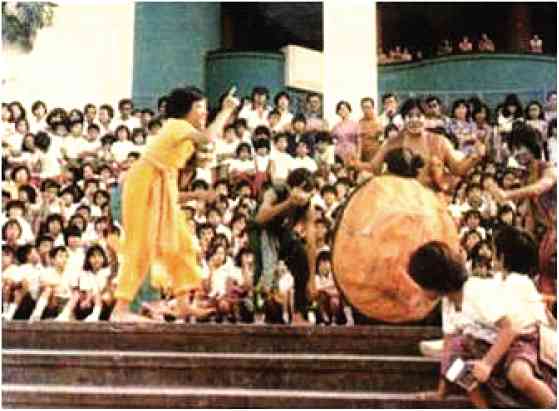 TEATRO Mulat performing on the steps of UP Diliman College of Arts and Letters, 1978

She has written 44 plays, 28 of these for children; 136 short stories, mostly for children and young adults; 26 books, and a novel for young readers about World War II, “In Binondo, Once Upon a War,” written from the point of view of an 11-year-old child. Add to these countless essays, speeches, poems and songs.

Lapeña-Bonifacio wrote her first play, “Sepang Loca,” in 1957 and followed this up with “Rooms” the following year. Both works won awards in the Wisconsin Playwrighting Competition and were staged at the UW Play Circle Theater, with the author herself designing “Sepang Loca.”

The two plays were later published in literary journals in the United States.

Lapeña-Bonifacio, however, is best known for her pioneering work in Philippine puppet theater. Coming home from study tours of children’s and puppet theater in Asia, Europe and the US, she discovered that there were hardly any plays for children and young audiences in her country.

Her first puppet play, “Abadeja: Ang Ating Sinderella,” with music by Felipe M. de Leon Jr. (now chair of the National Commission for Culture and the Arts) and puppets by Rafael del Casals, was favorably reviewed in the press. This led to the founding of the Teatrong Mulat ng Pilipinas, the official theater company and puppetry troupe of the University of the Philippines.

And so each year, there was a new play production, and mothers would bring their children to watch the shows.

“For them and for me, it was a very exciting period of awareness of children’s theater and children’s literature,” Lapeña-Bonifacio recalled.

Her dogged commitment to a vital but nearly vanished art form has brought Lapeña-Bonifacio fame and recognition here and abroad. The most memorable celebration of her work occurred in Bangkok, Thailand, in 2009 at the International Puppetry Festival under the auspices of the Unesco National Commission. During a break in the performance of the “The Ramayana” the performers approached her (she had been placed in the front row), clasped their palms, bowed and kissed her on both cheeks. When, misty-eyed, she kissed them back, the audience rose to their feet.

Lapeña-Bonifacio, 84, who was born in Binondo, Manila, remains active in creative writing, designing and performing. She is married to Manuel F. Bonifacio, who holds a PhD in Sociology from the University of Pennsylvania. They have a daughter, Amihan Bonifacio-Ramolete, a PhD in Psychology and a TOWNS awardee last year.

“Read the outstanding playwrights of your country and other countries to learn play-writing,” she advises young dramatists.

“Observe what is happening around you, the behavior of those who lead in government, politics, economics, religion, private lives, etc., for this is where you will obtain the material for your plays. Whenever possible, listen to speeches, talks, conversations, songs—from them you will get the language of your dialogues.”