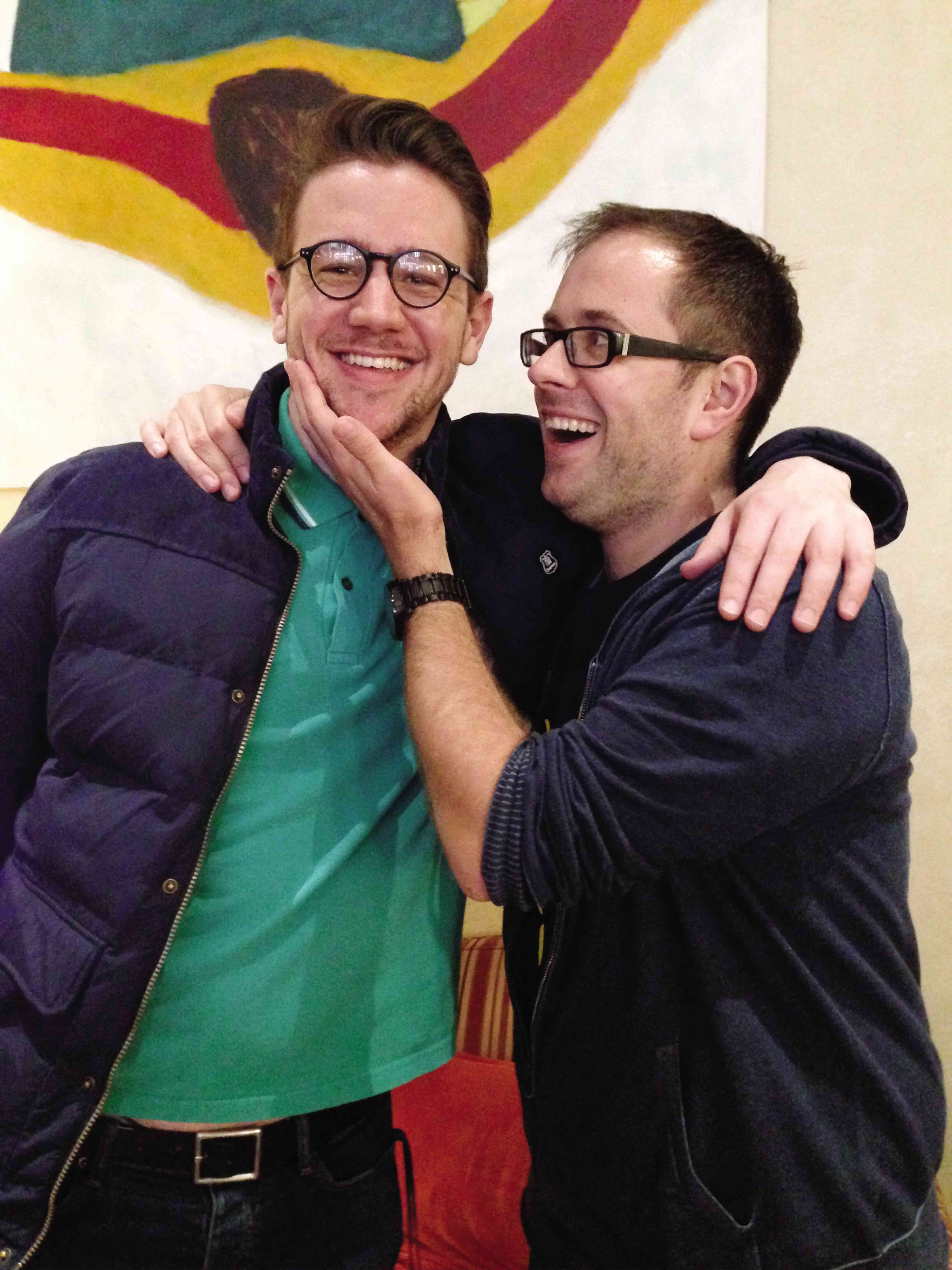 The unauthorized parody, written by Daniel Clarkson and Jefferson Turner, promises to present all seven Harry Potter books in just 70 minutes (and yup, it delivers). Created in 2005 as a five-minute performance to entertain people waiting for the release of “Harry Potter and the Half-Blood Prince” at a book shop in London, the show has grown immensely, having successful West End and Off-Broadway runs and touring around the world. The hilarious show is a real treat—and not just for Harry Potter fans. “Anyone can enjoy it. We try to make it as inclusive for everybody. We include pop culture references,” said Jeff.

You can expect local references, too, when the show’s Australasia tour makes its stop here.

“Potted Potter” has had two successful seasons starring Jesse Briton and Gary Trainor in Manila in 2012 and 2013. “Manila’s certainly the first place we’ve ever been three times outside of the UK,” said Jeff, the show’s cocreator, during an interview at Kingsway Hall Hotel in London. “Jesse and Gary reported back that Manila was crazy. They’ve never had audiences like it, they’ve never felt so much like rock stars, they said.”

This time, audiences will fall under the spell of two new performers—Benjamin Stratton and James Percy, who promised to arrive armed with chocolate frogs. We met Ben in London as well and he expressed his excitement about heading to the Philippines. “I look forward to seeing what this show is gonna be like,” he said.

“Potted Potter” opens on Sept. 30 at the RCBC Theater and Jeff, who is about to star in “Potted Sherlock” in London, will be here for the Potted Potter Opening Night Costume Party. Special awards will be given to audience members wearing the craziest Wizarding World outfits. He said, “I specifically requested to come out to Manila because I’d heard about the reaction and wanted to see it for myself. I want to come and experience the opening night.”

Ben, you’re new at this. What was the hardest part about learning the show?

Ben: It was getting the physicality into my body so it just became second nature. My very first show in Dublin, I was running around in a scene with Ron’s wig on for no reason at all.

Jeff: It’s an incredibly complicated role. He’s pretty much in charge of all the props.

The fans are usually really protective of the books. Why do you think they’re letting you get away with it?

Jeff: We’ve wondered this. We think it’s because Dan and I are both huge Harry Potter fans so it does come from a place of love.

Only two people play all the characters. Who is your favorite character to play?

Jeff: For me, I only really play Harry.

Ben: Voldemort is up there.

Jeff: I really like your Dumbledore. He does his Dumbledore very differently to how we originally wrote it. We would be annoyed if it wasn’t so funny.

Ben: One of my favorite childhood movies was “The Sword in the Stone” and Merlin in that particular film is… he’s brilliant but a complete fool at the same time. He’s this old doddering guy but he’s a genius. And that’s kind of how I wanted my Dumbledore.

Jeff: Oh, so you ripped it off?

Ben: So I ripped it off. That was my homage to Merlin. Dumbledore is one of my favorites but also Snape. I like playing Snape, he’s good.

Have any of the Harry Potter actors from the movies seen it?

Jeff: They have. Both Crabbe and Goyle—I can’t remember the actors’ names, I’m afraid.

One of them was thrown in jail for something, right?

Yes! But this was before. We had Luna Lovegood. We had a lot of the Gryffindor kids. But our favorite was Warwick Davis who plays Professor Flitwick. He came to see it in Australia. When Gary and Jesse saw that he was in the audience, they go, “What are we gonna do?” Because Professor Flitwick isn’t in our show. There are some characters that don’t quite make it. In the end, Jesse who is very tall, came out on his knees and just said, “Charmed.” And then he looked at Warwick Davis on the front row and said, “How was that?” And Warwick Davis said, “Still too tall.” It was great. Dan was very jealous that we didn’t get to meet him because, of course, he was an Ewok on “Star Wars” as well and Dan’s a huge Star Wars geek. Oliver Wood came to see us the last time we were on West End and he came to chat afterwards. That was very nice.

The audience gets to play Quidditch in the middle of the game. What was the craziest match you’ve seen?

Jeff: We’ve had grown men push children—not their own children, other people’s children—out of the way to score. They suddenly think they’re at some huge sports fight, like the World Cup finals. When we wrote it, we thought it would be the kids who would enjoy that the most. Genuinely not true. It is the adult men. Every single time.

The show gets really funny. Is it hard keeping a straight face?

Jeff: I’ve done the show for eight years now so there’s not a lot that Dan can do to make me laugh; but every now and then, he’ll catch me out. But it’s more often if a kid in the audience shouts something out. You get all sorts of crazy things. Dan is 6’4” and is about as English as can be. We’re on the West End and this kid looks up at him from the front row and the kid goes, “You remind me of Michael Jackson.” Another thing that makes me laugh is if Dan falls over. It makes my day. It’s a lot of fun.

Ben: I ran into the wardrobe unit in Ireland quite hard and it genuinely hurt. I fell over and James just wet himself laughing. I was like, “That really hurt.” I’m new and James will do everything he can do to make me laugh.

Do you notice a difference in the reactions of the audience depending on the country?

Jeff: Absolutely. From my experience—we did UK, the UK audiences are great and we did Canada and they’re a bit more raucous, and then we did America and that was crazy, the audiences in America. Not so much in New York… they’re a bit theater-savvy and a bit, “Go on, impress us” ’cause they’ve got Broadway. But when we tour America, that was just the most incredible reaction. As for the rest of the world, like I said, Manila was so popular we had to put an extra week in and that has never been done before, we’ve never done that before because our tour bookers are very grumpy.

What can we expect from your Manila show this time?

Jeff: I don’t know. Manila’s quite unpredictable. We don’t know how to react to that sort of reaction, really. Our Facebook page… when we came to Manila, normally when we go to a new city or country, our Facebook page might get 200 likes in the week we’re there. Manila was more than 5,000. Was it 30,000? You can’t get that many people in the theater, that’s what was amazing. Our main Potted Potter Facebook page which has been running for five or six years still doesn’t have that many likes. That was a week in Manila. That’s how insane it was. I don’t know. We’ll pretty much let these guys do whatever they want. We think the audience will love it.

Ben: With me and James, what you can expect is…

Jeff: Oh, but Jesse and Gary were good-looking, weren’t they?

Ben: They were good-looking, I’ll give you that. But what you can expect from me and James is unprofessionalism. Just kidding. We’ll probably be laughing as much as you but it will be very, very high energy. We’re just so excited to bring the show to Manila. Hopefully, we’ll remember our lines and will not just be reveling in the rock star lifestyle.

A lot of people who watched Jesse and Gary will watch the show again. What do you want to tell them? What’s going to be different?

What about their styles?

Jeff: Gary was very cool, he played the geek role very coolly. James plays it a bit… there’s essences of Ricky Gervais to his performance, a little bit David Brent-y. That sort of trying to be cool but really not cool. Jesse was… Ben’s a little more manic than Jesse… sprinting offstage, sprinting onstage, wigs and hats flying everywhere which is kind of what Dan is like as well. Jesse was a little bit more… outwardly controlled with it. The one-upmanship between Ben and James is very obvious and very funny. It’s a great formula. It’s almost like they’re trying to impress the audience more than the other one. It’s a very nice dynamic.

Ben: The best note I got in rehearsals was, “Ben, your task in the show is to really try and annoy James and really get under his skin at any opportunity. So literally, whether it’s just verbally or physically, you’re poking him the whole time.”

“Potted Potter” will run at the RCBC Theater from Sept. 30 to Oct. 5. Copresenter Visa is offering cardholders 10 percent discount on tickets from July 15 to Aug. 15. For tickets, call Ticketworld at 891-9999 or visit www.ticketworld.com.ph.