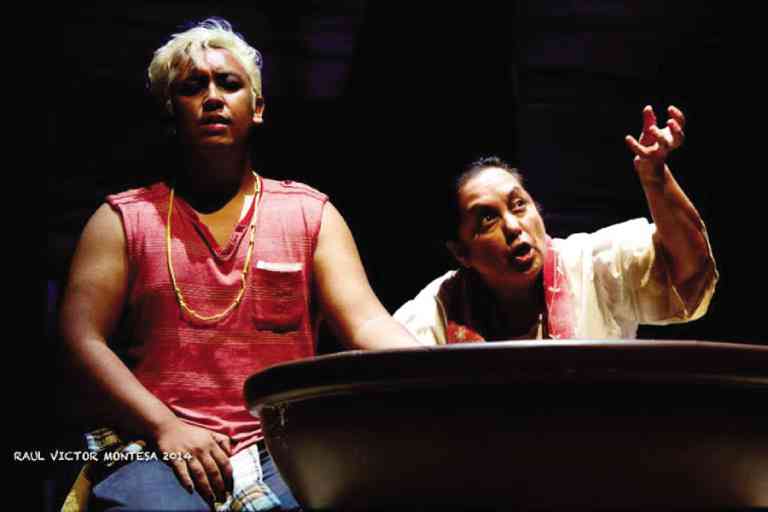 The peeling wall paint and crumbling papier–mâché ornaments in the Music Museum’s lobby may have been an indication of the state of its lighting systems. But it was most likely the aftereffects of Typhoon “Glenda” (which had left Manila only the night before) that caused the lights to go off three-fourths into GODinUs Productions’ opening night of “Flipzoids.”

There was magic in that moment. Actress Becca Godinez paused for one beat and decided to keep on talking. In a play about three lost characters trying to find their way, the darkness was, as one character mentioned, “…fraught with symbols.”

In addition to the actors’ steadfastness, lighting designer Shakira Villa was also there to save the day, and then some. Several minutes later, her crew was able to get eight PAR lights to work. Even though she was “only” tasked to recreate and monitor Gerry Linsangan’s lighting design from the show’s Los Angeles run, Villa proceeded to ever so subtly choreograph those eight lights and was even able to sneak in a dimming moment to end a scene, matching the emotions on stage.

This is what you call a Pinoy’s inherent, ineffable powers of pulso. And to see it in action was to give you goosebumps.

The play features three Filipinos from three generations, living in the US and struggling with varying degrees and kinds of isolation as they seek to establish identity, home and family (personal, cultural and otherwise).

Seventy-something Aying (Godinez) yearns for Pagudpud after having been petitioned by her daughter Vangie (Ellen Williams), who works as a nurse in Anaheim. Aying then encounters confused young adult Redford (Maxwell Corpuz), born in the US to Pinoy parents.

Written by Ralph Peña (who immigrated to the US and is now the artistic director of the acclaimed Ma-Yi Theater Company in New York), “Flipzoids” had its Philippine premiere in 1998 when Ma-Yi toured the original 1996 cast at the Cultural Center of the Philippines for the Centennial Arts Festival.

The play has had more than 60 other performances in various locations in the US, and a revival in New York in 2011.

This production, directed by Jon Lawrence Rivera, was co-produced by Ted Benito’s PAE Live! Productions and Latino Theatre Company in 2012 in the West Coast. Godinez produced the three-day Manila tour; she is also set to produce the Los Angeles and San Francisco legs of Ballet Philippines’ US tour scheduled for October.

More than 15 years after it was written, and even if the play is set in the mid-’80s, Peña’s text crackles with relevance, wit and pathos. The lines are unrelenting, evocative, thought-provoking and surprising. The jokes are hilarious, the punch lines are sharp, the frustrations are real, the vulnerabilities are poignant. The play suddenly detonates acts of violence (a hit to the face, a strangling, a slur) here and there, exploding the veneer of sense memories and intangible, uncertain futures.

When issues of identity are the topic, physical attributes and accents come, fairly or unfairly, into play. Was it a deliberate decision to cast plus-size actors for this production? To physicalize the land of plenty, perhaps? Redford was born in the US but the actor who played him has the most moreno skin tone in the cast. Take that, white America!

Vangie immigrated to the US; while actress Williams made a valiant effort at Pinoy-accented English, the twang she grew up with would seep in and her Filipino lines sounded a bit stiff. Godinez made for a very fair-skinned-with-a-tisay-accent Ilocana, but after the jarring first few moments, her consistent, strong characterization latched on to the audience and never let go.

This production sparks questions: Is identity skin color? An accent? Where you were born, grew up, eventually become successful? Where you’ll die and be buried?

Remember, quite a number of Filipinos initially hated Laguna-born Charice Pempengco when she became popular because of appearances in US TV shows (“Oprah” and “Glee”), but celebrated US-born Jessica Sanchez (whose mother is from Bataan) when she became a runner-up in “American Idol” (she’d never been to the Philippines till 2012; the marketing buzz called it a homecoming!).

We are a people who vilified fashion brand Bayo for its “What’s your mix?” ad campaign (featuring models’ mixed-race parentage via percentage rates), but produce countless articles describing the tiniest fraction of Filipino ancestry of foreign celebrities.

Go figure. The show and the discussion must go on.

Set designer John Binkley provided the ensemble with a wood-paneled backdrop that seemed like horizontal prison bars and constricting rectangular walking spaces. There was also a central pillar whose shelves were bedecked with blue mason jars. The set felt like a Crate and Barrel store—a wink at First World imperialism and Third World consumerism?

Williams and Corpuz, who both showed earnest portrayals and were even literally placed on higher ground and upstage (farther back the stage), were swallowed by Godinez’s skill, experience and comic timing, notwithstanding her being blocked downstage (nearer the audience).

Rivera situated Vangie and Redford on the solid portions of the set and Aying on the impermanent sand. Symbolism aside, it’s partly due to this spatial isolation and staging that made it a little difficult to relate to their relationships, because the three never seemed to come together.

Or was that the point? In contrast to the haunting and ambiguous ending directed by Loy Arcenas in the 1990s, Rivera epilogued this staging with a more pointed conclusion: The three characters may not have connected in the most ideal of ways, but they’ve redirected each other’s paths to new (and better?) trajectories.

“Flipzoids” is included in “Savage Stage,” an anthology of plays developed and produced by Ma-Yi Theater, available through Ma-yitheatre.org/store or Amazon.com. For details on the US tour of Ballet Philippines, contact [email protected]; tel. 8323689, 5511003; or like on Facebook (Balletphilippines).