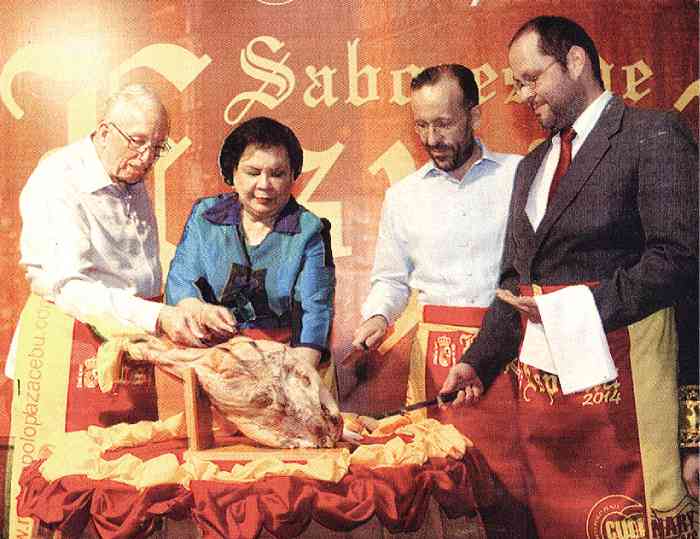 Guest of honor was Ignacio Perez Cambra, deputy head of mission at the Spanish Embassy in Manila.

Welcoming Ignacio at the foyer was the Casino’s president Eduardo Gonzalez (honorary consul of Mexico in Cebu) with his wife Therese; and former president Gabriel Leyson, in charge of cultural activities, with Tina Jordana.

They viewed the small feria of Spanish products which did brisk sales. For Ignacio this was his first visit to the impressive Casino Español which will soon be 10 years since it was inaugurated. The original Casino Español was established in 1920.

The club’s general manager May Ocaba was congratulated for the evening’s success. Two legs of jamon serrano were being carved at the Tapas area, where an abundance of cheeses and the Casino’s specialties were served.

At the main table with Don Ignacio and Consul and Mrs. Gonzalez sat honorary consul of Spain Anton Perdices with his wife Maripaz, honorary consul of France Michel Lhuillier and his wife Amparito, president of Amigos de España en Cebu, and Julina Muertegui, treasurer of Amigos.

Beautiful classical music was played throughout the dinner by a quartet from Cebu Philharmonic Orchestra. Applause went to Marc Hamlet Mercado, 1st violin; Kyle Osmeña, viola; and Christopher Mañus, base.

Present on this occasion was Javier Ruescas, founding member of the Madrid-based “Association Cultural Galeon de Manila.” He was in Cebu to film some sequences and historic landmarks.

He also did some interviews for a documentary titled “El Lago de España.” It makes reference to the Pacific Ocean as “The Lake of Spain.” For centuries no other than Spanish seacraft crossed the Pacific between Manila and Acapulco in Mexico.

Casino Español de Cebu greatly facilitated the filming of the interviews at its Salon Zaragoza.

The following evening, Ignacio was guest of honor at the opening of “Sabores de España,” the annual Spanish food festival at the Marco Polo Plaza Hotel. That is were he stayed for the duration of his Cebu sojourn.

Instead of a ribbon to cut there was a large leg of jamon serrano to slice up. Armed with sharp knives and wrapped in colorful aprons for the ceremony were Ignacio, general manager Hans Hauri, Gema Luisa Pido, Anton.

Gema has been the Marco Polo’s consultant for Spanish cuisine since the first “Sabores” was held in 2007. As usual, she rated raves from the tapas served at the lobby lounge to the elaborate dinner served at the private dining area of Cafe Marco.

Seated with Ignacio were Hans, Anton and Maripaz, Marco Polo’s Cebu manager Julie Najar, Maricar Perdices, Mikel Perdices, Dr. Nestor Alonso, Dr. Hope Solano and Gema. She was explaining how she made the filo pastry filled with bacalao, the boquerones with anduhaw fish, and the homemade jamon en dulce.

The dinner menu started with a salad of melon, Spanish chorizo and artichokes, followed by sopa cachoreña, made with fish on a broth of orange and parsley oil. Then came fabada asturiana and sizzling gambas.

Leche frita was among the desserts, as well as turron made by the Marco Polo chefs with almonds and hardened sugar.

They were asked to come out for a well-deserved round of applause: executive chef Stefano Verillo, Nestor Alcoseba, Juanito Abangan and Rodel Galvez.

Guest went home with circular containers filled the turron. Sales and marketing director Lara Constantino was given the idea of having them available at the lobby lounge pastry counter. Maybe they’ll do so for Christmas, along with those delicious ensaimadas.

Every year, the “Sabores de España” food fest at the Marco Polo is the hotel’s highest revenue source. On the two days and the week end following its opening reservations were duly made, but double the number came.

Next culinary journey at the Marco Polo opens on Aug. 1, with, as it has become traditional, a Swiss theme to coincide with the national day of Switzerland.