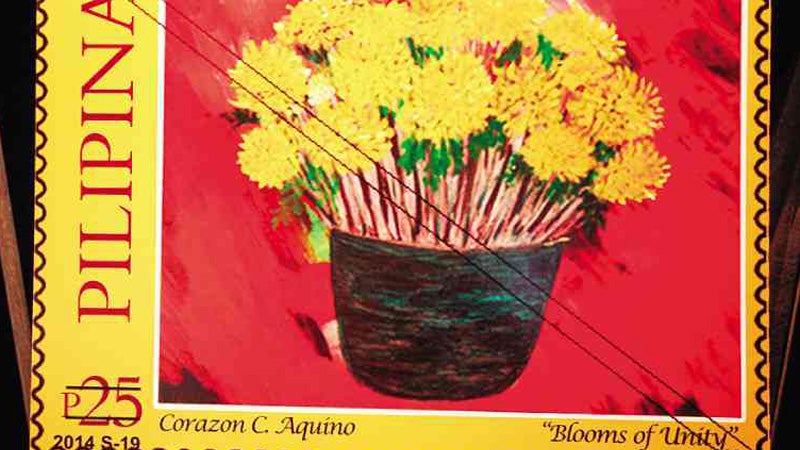 Cory’s flower paintings are now stamps you can smell

Depending on storage, the rose scent can last for more than two years, said PhilPost business line manager Enrique Tagle.

The floral-painting stamps were selected from the collection of Aquino’s close friends, who right away loaned the artworks for PhilPost to reproduce. Aquino’s former spokesperson Deedee Siytangco assisted PhilPost in selecting and contacting the owners of the paintings.

“In observance of her fifth death anniversary, we would like to immortalize on stamps these fruits of her passion for painting, thus promoting its value, while we do our share in educating and inspiring the succeeding generations about this special talent of President Cory,” said Postmaster General Josie de la Cruz.

Four paintings will be featured in its four-stamp collection, with only 200,000 prints available. The souvenir sheet, with only 7,000 copies, will feature Pangilinan’s “Rosary and Roses Series.”

Each stamp costs P25, while the four-stamp collection sells at P100.

Stamps will be available at the Post Shop, Postage and Philatelic Division located at the Manila Central Post Office, all area offices and post offices nationwide.

“The ‘Rosary and Roses Series’ shows a side of President Aquino seldom seen by the public. It speaks of the forces that were her quiet source of strength… Forces that are not often seen as symbols of strength,” said Ramon Isberto, public affairs head of PLDT who spoke on behalf of Pangilinan.

Aquino, the self-proclaimed “plain housewife” who later on became Time magazine’s “Woman of the Year” in 1986, studied painting under the tutelage of artist Jeffrey Consumo in 1996, four years after her presidential term. Flowers and women dominated her artworks, usually in acrylic or oil on canvas.

Painting, next to prayer, became Aquino’s source of solace and meditation.

So passionate was Aquino with her rediscovered love for the art that when she met Peza’s Director General De Lima, she immediately talked her into painting. She and Aquino became fast friends after Aquino’s presidential term.

Despite the constant exchange of lighthearted ribbing between the two women, with De Lima insisting she was just a “mere lawyer, not an artist,” Aquino sent over painting materials to her house.

That left De Lima no other choice but to pick up the brush.

In March 2008, the Aquino family announced that the former President was diagnosed with colorectal cancer. On Aug. 1 the next year, at age 76, Aquino passed away at the Makati Medical Center.

Stamps are like archival records of a country’s heritage, like visual narratives of a nation’s sovereignty, history and identity, said Chito Sobrepeña, president of Metrobank Foundation, who spoke on behalf of the Ty family.

“Aquino’s dedication to social development was authentic and inspiring. She never missed a board meeting even when her health had been compromised by illness. Her paintings immortalize the love of a leader who fought for our country’s democracy while maintaining a gentle heart, manifested through the creative expressions of her flower paintings,” Sobrepeña added. (Aquino served as chair of Metrobank Foundation Advisory Board from 1993 to her death in 2009.)

This is the second of the Aquino postal stamps printed by PhilPost. The first collection came out in 2009, to memorialize the 40th day of her passing.