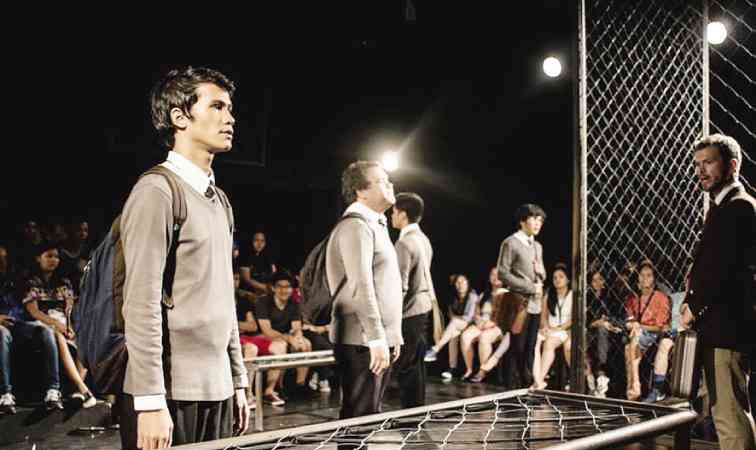 “Middle Finger.” We’re not sure about the imagery and related context that Filipino-American playwright Han Ong had in mind when he made it the title of his stunning, disturbing work, but after viewing Tanghalang Ateneo’s (TA) interpretation of the play last weekend, we get the drift.

TA’s “Middle Finger,” translated into Filipino by Ronan Capinding and directed by Ed Lacson Jr., is an anthem to teenage rebellion and young people’s quest for meaning. It’s about coming to terms with sex, identity and all the other things that make growing up difficult and fascinating at the same time.

Yet, despite the tragedy that befalls one lead character, this is not another mournful “dying against the light” credo that usually has the lead characters tearing down the establishment and then, after much soul-searching, creating some kind of harmonious bond with their antagonistic authority figures.

The jail-like set, also by Lacson Jr., has made the intimate Black Box Theater into a claustrophobic dark cage that symbolizes the lead characters’ plight. Like most teenagers, the lead characters—four Filipino-American students in a private Catholic high school in the United States—cannot relate to their parents’ aspirations for them, the rigid ethical requirements of the teachers and the pat standards of morality applied by default to their own inner journeys.

In many a play, a lot of weeping and gnashing of teeth would ensue from such a set-up, and this one has its share of them. However, and fortunately, in this TA production, despite the typical parent-child divide, or the authoritarian approach of the American teachers, the protagonists mine the absurdity of their situation, giving rise to explosive moments of unaffected, natural humor.

Much credit should go to Capinding’s translation. The dialogue, the banter, the modern catchphrases—all make the predicament of the students relatable to their real-life counterparts who are watching as audience members merely a few feet away.

The smart irreverence can also be attributed to the wonderful performances of the cast, specifically the student non-professional actors. As the school rebel Jakob Rodriguez, Guelen Luarca parlays his teddy-bear frame and semi-satirical facial expression into a performance of aching, nervy realism. Equally compelling is second lead Joe-Nel Garcia, who plays star student and Jakob’s best friend Benjamin Lunga.

No glam movie-star looks nor any instance of put-on cuteness distracts the audience from the emotional upheavals happening on stage. Luarca and Garcia and the other TA ensemble members bring a riveting naturalness to their roles that quickly cements the connection between their characters and the mostly young audience.

As with teenagers, the characters simply want a connection beyond the friendships they have forged with each other. Ong’s material makes this clear without the pompousness and sentimentality that are usually found in similar material. Authenticity is the key—and Jakob tries finding it in a friendly prostitute, while nerdy Yachin struggles to reach out to his ill and guilt-ridden older brother, and Benjamin cries out for help in his poetry.

This sense of dissonance and alienation derive from their own family homes—from insecure immigrant parents who, aside from having to handle teenage kids, have to secure their own footing in a foreign country. Joseph de la Cruz’s cold Mr. Rodriguez, Marjorie Lorico’s manipulative Mrs. Rodriguez and Dolly de Leon’s noble if martyr-like Mrs. Lunga make for secondary characters that transcend stereotypes to become something intuitively genuine and real.

Stereotype, though, becomes the order of the day for the American teachers, who are played by a Filipino-American (Richard Cunanan) and an actual American (David Bianco).  Ong, Capinding and Lacson apparently let them remain as such to position them as lightning rods of the boys’ alienation and to highlight the gap not only between authority figure and student but, more broadly, between established American society and the immigrants flocking to its shores, dreaming of a better life through integration and assimilation.

The play ends in Jakob’s victory. He gains the newfound approval of his Caucasian masters, he rises above the dysfunction of his family, and he manages a compromise between the rigid religious values taught him and his search for identity. At the end of the day, he can breathe—and he does it with his soul intact, without selling out, if with a little help, from his deceased best friend.

The underdog raises the titular middle finger at his oppressors, and the beauty of it is, they never even notice.