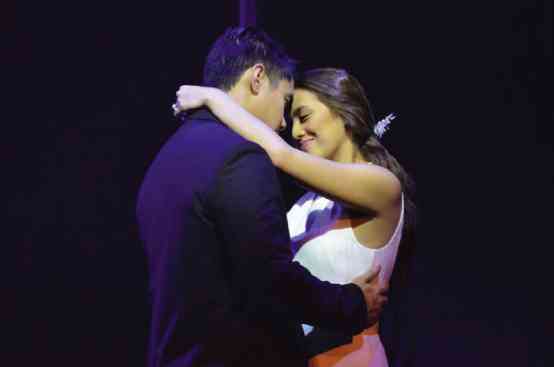 ‘The Last Five Years’–heartbreak that sears and soars

After the initial bliss and the endless promises of love, when does a couple finally call it quits? At what point do they (or one of them, anyway) say it’s over?

That is the question posed by Jason Robert Brown’s heartbreaking musical, “The Last Five Years,” which has been given an equally moving presentation by 9 Works Theatrical in an ongoing production at the Carlos P. Romulo Auditorium, RCBC Plaza, Makati City. There are no easy answers, and the ending may not satisfy everyone. However, the beauty of Brown’s all-sung musical, directed by Robbie Guevara, is that it takes the audience on a poignant, time-warp trip.

The small but distant stage is marked by an uneasy line of broken platforms. Bars near the ceiling evoke a shattered roof, and a lonely bed functions both as a barometer and a calendar of the once-happy couple’s falling in and out of love. The unsteady stream of colors chosen by scenographer Mio Infante and lighting designer Martin Esteva matches the emotional ups and downs experienced by rising novelist Jamie (Joaquin Valdes) and struggling actress Cathy (Nikki Gil).

The bright hues never quite show their brilliance, fading instead into patches of passionate red, depressing blues and hopeful greens to mirror the couple’s evolving emotional states.

That sense of dissonance is also felt in the very first song, with Cathy in tears over the end of her five-year marriage to Jamie. Jamie has called it quits, is moving out and will not be persuaded to do otherwise. Then the mood shifts—and the romantic “time travel” setup begins.

Brown lets us see both characters throughout the different phases of their relationship. Cathy’s can be categorized as a walk down memory lane, starting from Jamie’s exit, then moving backwards to their first happy moment when Jamie comes a-courting.

Jamie’s perspective, meanwhile, takes the opposite tack—from his happy past as a lovestruck Jewish writer smitten with Cathy’s goyim beauty, to his eventual final goodbye.

As written by Brown and staged by Guevara, Jamie and Cathy rarely interact on stage. Every time one reminisces or looks forward, the other is out of sight. This affords the audience enough emotional space to absorb the characters’ emotional states at particular points in time, while also challenging their imagination to consider Jamie and Cathy’s evolutions from each other’s perspective.

This approach, which occasionally drifts into a sort of musical stream-of-consciousness, also allows the audience to debate in their heads why the marriage failed. Was it because of James’ skyrocketing popularity, or Cathy’s narcissistic self-pity? Was there one moment in time when they could have repaired their bonds? How come the love that seemed so powerful at the beginning was unable to overcome the conflicts along the way, leading to a broken end?

As Brown intended, Jamie and Cathy interact in the same theatrical space only once: During their wedding vows, the most profound and joyful moment in their lives.

Guevara, though, does Brown better by letting his characters meet each other one last time at the musical’s end. Cathy is saying goodbye to her new beau who has just brought her home, while Jamie is looking at their home one last time. The words are identical, but one is sung in hope, while the other is sung in quiet despair.

Kudos goes to both Valdes and Gil, who play their characters spot-on and sing Brown’s roller-coaster musical pieces with just the right combination of passion, pleasure and pain. Don’t expect the jaunty, happily-ever-after sounds of a Rodgers and Hammerstein musical here. Brown wants his characters to display their guts in all their transparency, and both Valdes and Gil rise to the occasion.

Gil’s transformation is particularly wrenching, from a bubbly ingénue with so much to look forward to, to the broken lady cast adrift by her shattered dreams, both professional and personal.

Valdes’ hardening is equally devastating; his eyes sharpen almost ruthlessly and his carriage stiffens as he falls from the boy with his heart on his sleeve to a man of the world who copes with his pain by sleeping around.

Boy meets girl. Boy marries girl. Boy leaves girl. It is a sad but all-too common twist to the modern storybook romance, and 9 Works Theatrical’s interpretation of this particular disintegrating five-year marriage leaves you quietly but unforgettably shaken in the end.