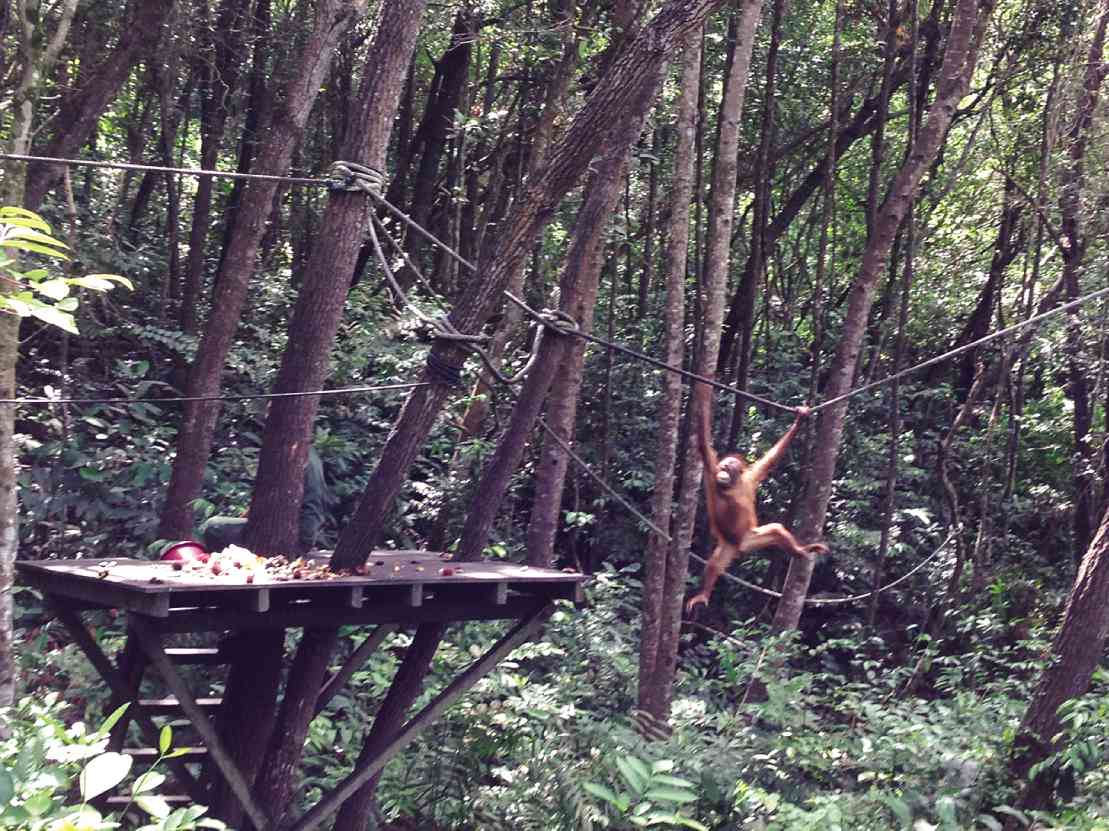 SWINGERS Get to know the orangutans undergoing rehabilitation at the resort’s nature reservation. PHOTOS BY KATRINA A. HOLIGORES

I’m a bit of an over-planner when it comes to travel. I blame my mother for this inherent trait, she who was such an expert in organizing  a trip way before we left. Because of her, I have gotten used to thinking ahead, way ahead.

When I was tasked (OK, I took this upon myself) to plan something special for my boyfriend’s birthday, I spent months agonizing over the perfect place to go.

There were several factors I had to consider, the first being we were both working, so it had to be somewhere “close-by” so long-haul was out of the question.

Second, it had to have  recreational options—lying around getting a tan was not our idea of “getting away.”

And third, it had to have lots of food options since he’s semi-herbivore and I’m a true omnivore.

Oh, and I nearly forgot the most important, the weather had to be ideal for the time of year.

Diving into a treasure trove of travel sites on the Internet, I was able to narrow my choice to destinations that were weather-friendly in August, then, narrowed it even further by selecting one with facilities that could accommodate our restless souls and differentiating culinary preferences.

The result? The Shangri-La’s Rasa Ria Resort in Kota Kinabalu.  Why? There were direct flights from Manila to “KK,” as it is more commonly called, and the resort had a nature reserve where one could hike in the forest (with a chance to encounter orangutans and other wildlife), a huge beach with massive shoreline for long walks, plus various sea toys like paddle boards, kayaks and hobiecrafts.

For lazier days, it had the Chi Spa, pools and a big Jacuzzi.

The resort is certainly not a “budget find” but I was able to score a reasonable deal via www.booking.com.

The only glitch was that my Air Asia flight got “moved” (in other words, canceled) for no apparent reason several weeks before my trip, so I had to scramble for another carrier which meant a not-needed stopover in Kuala Lumpur.

With the inconvenience of the flight out of the way, we headed to the resort which was located 45 minutes from the Kota Kinabalu International Airport.

For those not familiar with this part of Malaysia, Kota Kinabalu is the capital state of Sabah in East Malaysia. The city itself is along the northwest coast of Borneo facing the South China Sea.

When we got to the resort, we were treated to a surprise upgrade from the Garden Wing to the Ocean Wing, which meant, a bigger room, a more impressive view from an expansive terrace with a huge outdoor tub. After freshening up (we had been on the go for about 12 hours, door-to-door), we were whisked off to the beachfront gazebo by the Coast Restaurant for a private dinner for two.

The menu was delicious, creative appetizers, fresh seafood and champagne all served us as we enjoyed a rather rainy view of the sea. Had the weather been better we would have been treated to a spectacular sunset over cocktails.

Still, it was a lovely way to end our first night in the resort, with my boyfriend being serenaded with a birthday song and chocolate cake.

We had also pored over the resort’s daily activities for the weekend and had already selected various things to do throughout the day, starting with the orangutan feeding in the morning.

The weather improved over the weekend, affording us clear views of the beach from our room and an amusing view of the Orangutans swinging in for breakfast at the resort’s nature reserve.

There was a lot to do, so it seemed four days was way too short, considering the surrounding areas that could still be explored. There was the canopy walk that could be done with birdwatching, more jungle trails, even nocturnal ones for the sun-scared, even if all the trees provided adequate shade.

If you prefer the water,  hop on a hobiecraft for a quick sail. We were lucky to be surprised by a huge sea turtle popping up beside us to grab some air! That was certainly one highlight of the trip.

For a more passive (and drier) experience, there are river cruises to the nearby village and even a sunset cruise at happy hour.

We also had encounters with other travelers who made the resort their last stop of their Sabah journey. Some had rented a car and drove around for about a week being able to sight even more flora and fauna in another reservation as well as get a glimpse of local life in the villages.

One of the resort’s rangers also recommended we plan a trek up Mount Kinabalu if we ever decided to return. This mountain, with an elevation of 4095 meters, is protected as Kinabalu Park and is also a World Heritage site. On our last forest walk we were lucky enough to see its peak which is usually hidden behind a bed of clouds.

Like most mountains, it seemed to give off a powerful, mystical energy, almost drawing us in.

All the fresh mountain and sea air certainly energized this “over-planner” and as our plane rose above the endless stretch of green of Borneo below, I was already visualizing how to be “welcomed back” into the jungle.