‘Cock’ is back–for one weekend only | Inquirer Lifestyle ❮ ❯ 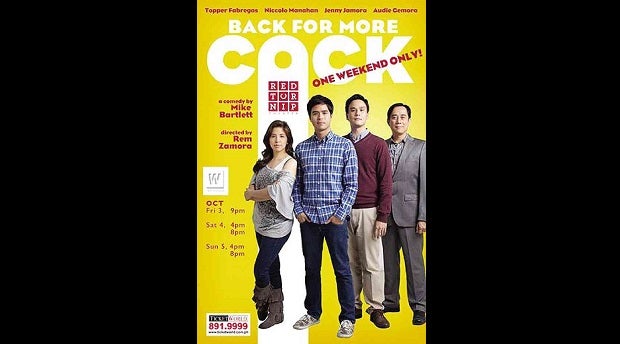 ‘Cock’ is back–for one weekend only

“Cock,” Red Turnip Theater’s production of the Olivier Award-winning play by Mike Bartlett, is back on stage on Oct. 3-5, six months after its successful first run. And director Rem Zamora couldn’t be happier that his first “baby” is making a reappearance.

“The addicting thing about directing is that you’re so involved in the development of the show. You’re so invested in it,” he says. “Like you’re giving birth to a baby, you are so protective. Wala kang paki kung anong sasabihin nila, basta ito anak ko ’to.”

The overwhelming reception “Cock” enjoyed—positive reviews from all directions during its initial 15-show run last March—elated Zamora. That’s why he and his colleagues at Red Turnip thought of bringing the show back.

It’s a good feeling for a director na mare-rerun ’yung show mo. In other words, you don’t rerun it porke’t gusto mo lang, you rerun it kasi people did like it,” he says.

Naughty title aside, “Cock” has an equally tempting plot—about a man who has to make a choice between his gay lover and the woman he falls in love with.

Critically acclaimed for its masterful use of sharp dialogue and palpable drama, the 90-minute production that Zamora staged transforms a bare stage and prop-less production into a surprisingly colorful, brutal cockfight.

Coming back from the first run are Topper Fabregas as John, Jenny Jamora as W, Niccolo Manahan as M, and Audie Gemora as F, M’s father.

“If there will be anything different in this [rerun], maybe it will be the attack of the actors,” Zamora says.

Despite “Cock’s” success, mounting a theater production is still a numbers game, he adds. Red Turnip, a newbie theater company only on its second season, continues to “test the market for straight plays,” and is still trying to “get the formula right.”

Alongside the “Cock” comeback, Zamora is prepping up for his second directorial job—Donald Margulies’ “Time Stands Still,” to be staged February next year.

“Slowly but surely,” Zamora muses about his company’s buildup. Straight plays may not have the same “magic in musicals,” but he is happy to know that “there is a small niche [for straight plays], and it’s growing.”

And, more importantly, “we’re becoming the theater company that’s known for them!”