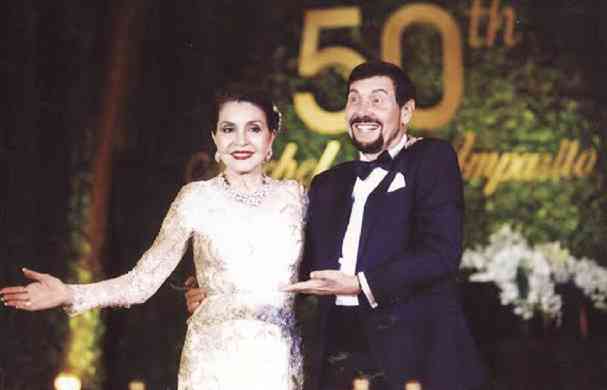 MICHEL and Amparito Lhuillier have just celebrated their golden wedding anniversary in Cebu. It was a two-day observance that was as well planned as it was attended by a throng of family and friends.

“He is my first love,” Amparito said when asked about their love story. They met when her cousin Anthony Trillo introduced them at a party in the Veloso home in Malate.

“I had just graduated from high school in St. Scholastica’s College in Pennsylvania Street (in Malate),” said Amparito. “I lived with my parents, Jaime and Nita Llamas, in nearby Paris Street, also close to the Veloso home.”

“Meet my friend, Michel Lhuillier,” Anthony told Amparito. “His father, Henry Lhuillier, is French; his mother is from Cebu.”

Michel asked her to dance, but they never said a word to each other all night. She knew that he was studying in De La Salle College nearby.

It was summer, so after the party Michel left for Cebu, and later for Paris to spend time with his grandmother, Marthe Lhuillier, and to hone his French.

Back from Paris he called Amparito. “Remember me?” She answered,” Oh yes, you danced like Elvis Presley.” He asked if he could call on her at home, and he was welcomed by her parents who found him, “Muy respetuoso.”

When Amparito became a teacher they spent Sunday afternoons at her home, she doing her lesson plans, he helping her to check test papers or any other similar chore.

The courtship lasted for five years and a half. They were married on Aug. 2, 1964, birthday of Michel’s mother Angelita Escaño Jones de Lhuillier, at the San Agustin church in Manila. The reception was at Casino Español.

They settled in Cebu, Michel helping his father in the family business of pawnshops and jewelry stores. He also held an executive position in the family-owned Visayan Electric Company.

They raised their four children in Cebu—Charles, Michael, Yvette and Monique, who were born in the span of seven years.

Amparito kept busy with a dress shop at home, and that greatly influenced youngest daughter Monique who took art lessons; the better to sketch the clothes she designed for herself.

The years have passed and brought with them a good measure of prosperity that has been attained through hard work and dedication. At the moment, Michel and Amparito have never been busier.

Like his father before him, Michel has for some years now been the honorary consul of France, his territory being the Visayas area. For that he has been decorated with the French Legion of Honor.

As their 50th wedding anniversary approached they planned its celebration with care. There would be two events. One was at their scenic home in Maria Luisa Estate Park on the eve, and another on the great day, Aug. 2, with a mass of thanksgiving at the Cebu Cathedral, followed by a reception and dinner at the Marco Polo Plaza Hotel Ballroom.

Amparito, who had kept her wedding gown (she still fits in it) asked daughter Monique to create a number that would incorporate the train of the Pedrito Legazpi dress. The results were fantastic, as everyone has seen. Amparito went to California last May to fit it, and returned exclaiming superlatives.

Invitations to the celebration were issued and sent within a good time frame for guests to respond. Everything seemed fine, except the unpredictable weather. It had been raining strongly for days.

On Aug. 1 itself it rained in the morning, at noon, and even at 4 in the afternoon, and those were not just drizzling showers.

Optimistically, Michel said it would not rain on the al fresco party. The weather bureau had assured him, and Amparito, who had a Plan B, said she’d think positively.

Sure enough, the sky cleared, and the party was a lark. Guests feasted on Cebu specialties, including the traditional lechon. They were also regaled by a program of songs and dances featuring the 10 Lhuillier grandchildren.

Next day, Aug. 2, the Cebu Cathedral was all lit up, inside and out, for the solemn evening rites. The central aisle was bounded by hedges of greenery, and the altar was fragrant with a profusion of flowers.

Organ music, supervised by Msgr. Rudy Villanueva, gave further dimension to the solemnity of the occasion, as principal sponsors marched to the altar:

Then came the children and grandchildren—Charles Lhuillier with daughter Nicole; his wife Joanna Palanca Lhuillier with Veronique and Marcel; Michael and Joanna (née Maitland-Smith) Lhuillier with their sons Michael James, Matthew and Myles; Yvette and Franck Warned with Maxime and Bianca; Monique and Tom Bugbee with Jack and Sophia.

All smiles and radiance Michel and Amparito swept down the aisle. Fr. Ernesto Javier, SJ, who awaited at the altar, at the start of the mass said this was more a jubilee than an anniversary.

The pre-dinner reception was held at the mezzanine of the Marco Polo where everyone did justice to the succulent oysters flown in from Canada, and the marinated salmon in a station just for the purpose.

Champagne flowed all night. The ballroom doors were opened and that was quite a sight. Huge white orchids bloomed on dried grapevine branches that covered the ceiling, truly a feat to the credit of Teresin Mendezona and Pinky Chang of Pink Flora.

On the buffet and on the plated menu for the presidential table there was an array of epicurean delights specially created for the occasion. Heaps of congratulations were expressed to the hotel’s general manager Hans Hauri and his wife Bo.

Mila Espina had prepared a program of songs and dances performed by scholars and alumni of the Amparito Llamas Lhuillier Educational Foundation with focus on the performing arts. Also on stage were Ogie Alcasid, and Cebu’s singing doctor Warfe Engracia.

Michel and Amparito featured in the program as well, with words of appreciation, plus the usual—cutting of the cake and eating it, too, and dancing to a lilting waltz. The children took their turns to proposed toasts and the rest of the night was spent dancing.

Former Cebu governor and now Rep. Gwen Garcia was tripping the light fantastic until 2 a.m. when she was asked to join the band’s singers. There she went!.