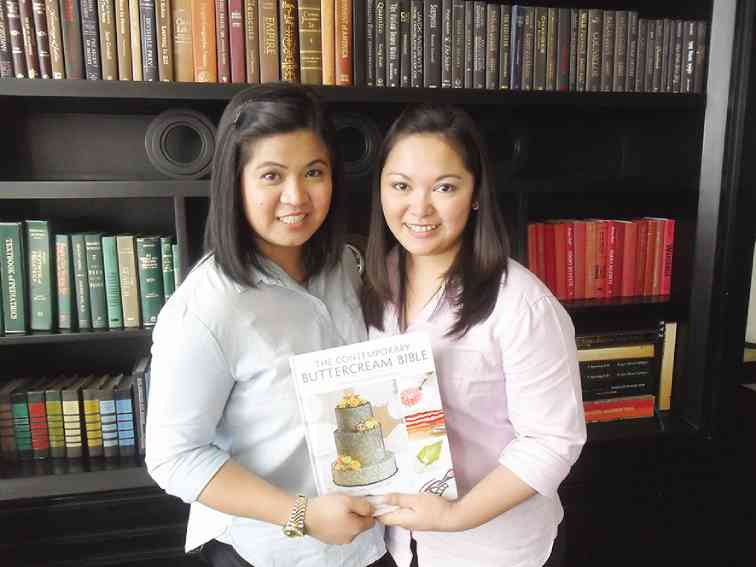 CHRISTINA Ong and Valeri Valeriano with their book

Valeri Valeriano and Christina Ong, former nurse and caregiver, respectively, have even conducted master classes on Stained Glass Art Buttercream at the Victoria and Albert Museum in London.

Valeri (without the “e”) Valeriano and Christina Ong have been doing the lecture demo circuit in many parts of the world—the United Kingdom, United States, Hong Kong, Mexico, Thailand, among others. They teach how to decorate with buttercream icing. And yet the two Filipino women lament that they are hardly known in their home country.

They are popular in the Internet, though. Penk Ching, one of our best cake decorators, came to know of them on Facebook where she learned of their scheduled classes, which coincided with her visit to Boston in 2013. There, Ching said, Valeriano and Ong showed off their buttercream artistry at The Cake World School of Andreia Aguiar.

There were too many questions in my head before meeting them. Like Ching, I found their Facebook page to contain some of the information I needed. Yet even with these and possibly the same questions asked by interviewers who were there before me, both women remained enthusiastic about retelling their story.

They both arrived in the UK in 2008. Valeriano was to work as a nurse while Ong, a commerce graduate, thought she had better chances of working as a caregiver, and so studied to be one while there.

On Mother’s Day, they wanted to do something different for the woman they were caring for. They were inspired by a YouTube video that demonstrated how to do buttercream icing piping using only a Ziplock as a substitute pastry bag with one end cut off.

They made a cupcake bouquet with a sunflower design on top of each cake. It so thrilled the celebrant that she told them they could start a business.

Starting a new career or business wasn’t easy. Valeriano and Ong displayed and offered their cupcake artistry on the Internet under the name Queen of Hearts Couture Cakes, but got no orders. They inquired about shows and fairs where they could bring their goodies, but got no replies.

Finally, they had a chance to sell at a community fair when one of the exhibitors backed out and the women didn’t have to pay for the space. They made 200 cupcakes and 180 cake pops (lollipops made of cake), all with a small oven no bigger than a toaster oven, because a bigger one couldn’t fit in their studio flat. That day, they got their first wedding cupcake and small cake order.

In a way, they were lucky to have started the business in the UK because home bakers aren’t as restricted there, unlike in the US where there are many licenses required.

And there are also lots of cake shows. Once they were ready, they joined competitions such as Cake International in Birmingham, the biggest sugarcraft and decorating show in the UK.

Valeriano won a silver for her stained glass wedding cake, and Ong grabbed a bronze for her lace design on a wedding cake. In 2013 they joined Salon Culinaire UK, where they won a gold each.

In a cake decorating world dominated by fondant, I suppose their buttercream creation must have really made waves.

The question is, did they ever take baking lessons? They smiled and said, “no.” Ong added that when Valeriano wanted to show a new design, she would do it by using buttercream, because she couldn’t write it on paper.

They had found their medium of expression and created designs good enough for presentation at master classes on Stained Glass Art Buttercream at the Victoria and Albert Museum in London.

Social media publicized their classes and other activities around the world. They still do their own schedules, but being so busy now, they no longer accept orders for their bespoke cakes. A celebrity, they said, wanted a cake and money was no object, but they had to turn it down as they had a class in another part of the world.

The “cake ladies” no longer work as nurse and caregiver because the buttercream business has taken over their lives. They still live in the UK, but in a bigger flat, and are already British citizens.

Still, they proclaim and introduce themselves proudly as Filipinos, and wear a pin of the Philippine flag on their uniforms.

While they have classes around the globe, they say they make sure that they source their materials locally. Flour, baking soda and butter are different in each country, they say. That means they adjust to different kinds and brands of ingredients so that these are available to their students.

I hope that more Filipinos get to know these two trailblazing women, because their achievements are what makes the country shine even more.

Undoubtedly their popularity online is no secret. Even before the launch at Powerbooks, their book had sold out and extra orders had to be shipped in. There will be a second book early next year, they said.

“I am absolutely proud of them,” said Penk Ching in an e-mail. She speaks for all of us who have come to know them, finally.