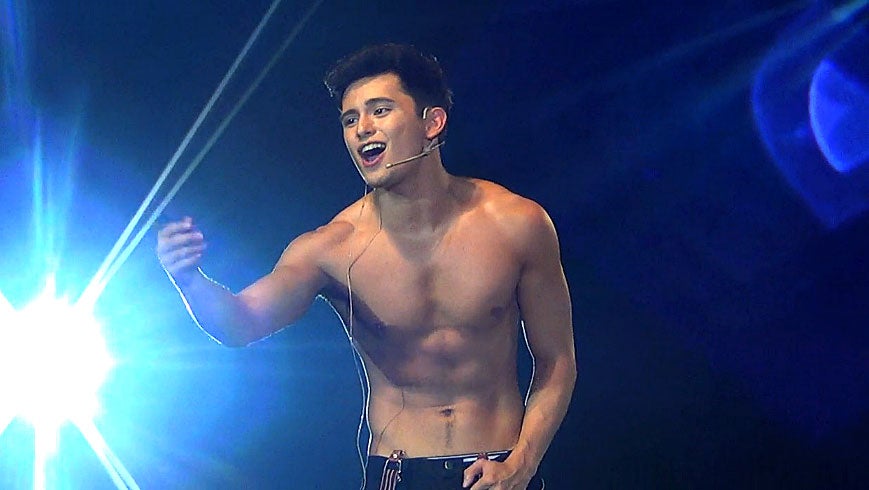 MANILA, Philippines―Overtime at work has never been this steamy.

About 5,000 people trooped to the World Trade Center Wednesday night to meet 69 of the hottest employees in fictional Cosmo Tower 69.

For the 14th edition of the Cosmopolitan Bachelor Bash, the women’s magazine decided to continue the storyline they have started last year as students from Cosmo U have graduated and were now ready to conquer the “real world”.

This year’s theme did not disappoint as the stage was completely transformed into an office building’s facade and the men dressed up as security guards, maintenance crew, interns, and company executives during the three hour show.

One key aspect missing in this year’s show were the water guns given to select audience members to douse the hunks. However, some models got creative and used bottled waters to douse themselves.

TV5 artist Vin Abrenica was caught unaware when his brother, Aljur, came up the stage and doused his younger brother with water. The two then hugged on stage and walked the catwalk together.

On the other hand, singer Markki Stroem toted a fire extinguisher gun when he rocked the catwalk. The crowd got excited when he teased the ladies by slowly putting the gun inside his underwear.

G-Force Stallions sang and danced Nicki Minaj’s Anaconda, much to the delight and cheers of the audience.

Meanwhile, John James Uy brought a toy snake from his crotch and terrified girls from the front row when Uy walked on stage with the snake coiled around his neck.

The Cosmo Tower 69 Executive Board

Cosmo also picked 10 men who composed the “Executive Board” of Cosmo Tower 69, some bearing gifts from their underwear to give to the adoring audience.

Actor Geoff Eigenmann went on stage with a can of whipped cream and sprayed some cream on his body, inviting an audience member to have a little taste of him.

Daniel Velasco, being the Tower’s “Chief Medical Officer” nourished fans by pulling out candy bars. On the other hand, Benjamin Alves got naughty when he grabbed a fan’s phone and attempted to take pictures of his crotch. He also gave three roses to select fans, which he brought conveniently on his boxer shorts.

Actor Joseph Marco was the night’s ladies’ man when he gave out black bras printed with his name, all from his underwear.

Chief Executive Officer Paulo Avelino got the loudest cheers when he emerged fully-clothed. He slowly stripped on stage, urging the audience to cheer on what piece of clothing he would shed next.

Talk Back and You’re Dead star and Cosmo Tower 69 Executive Board member James Reid got one of the loudest cheers of the night, even before the show started. Screaming fans cheered whenever Reid’s photo is flashed on a trailer.

The show took an unexpected turn when Reid fell off the stage while serenading the audience. Reid immediately composed himself and continued his performance despite the fall, gaining the admiration of fans.

The “We Are So Proud of You James Reid” became the a top trending topic Thursday, reflecting how fans supported Reid despite the incident.

Those who attended the show just wished that their office could be that hot everyday.