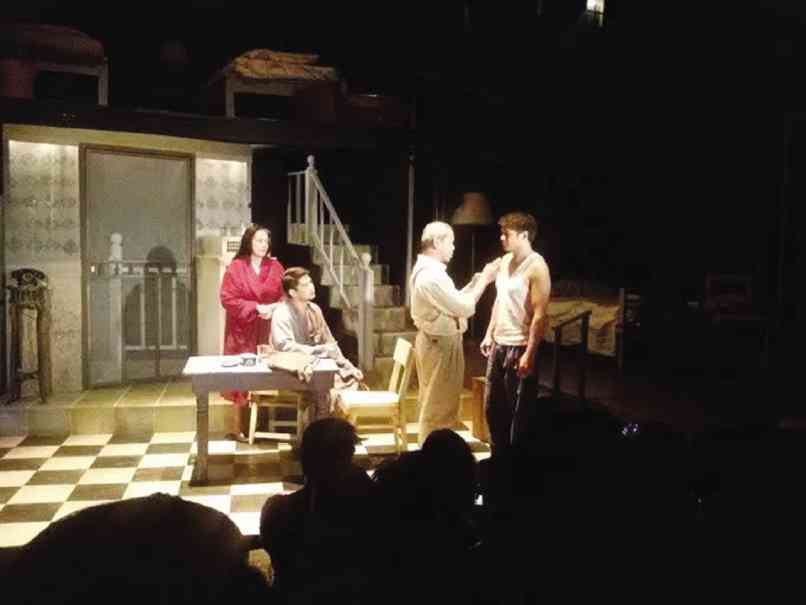 Somber and thoughtful, if less than truly powerful

Tanghalang Pilipino’s “Pahimakas sa Isang Ahente” has got to be one of the longest straight (meaning nonmusical) staged dramas in recent history. Clocking at nearly four hours, it’s a bittersweet tale of a once charismatic and perpetually optimistic man on the verge of losing his dreams, his soul and his family (in a manner of speaking).

Arthur Miller’s “Death of a Salesman,” translated into Filipino in this version by Rolando Tinio, can arguably be called the death of the American Dream. It premiered on Broadway on Feb. 10, 1949, and won both the Pulitzer Prize for Drama as well as the Tony Award for Best Play that year.

The emotional, mental and physical deterioration of the main character, once maverick sales agent Willy Loman (played in this production by Nanding Josef), is slow and torturous. His rapid and frequent lapses into reenacting or reliving a past long gone may have been alarming and inexplicable during Miller’s era.

Now the families of those who struggle with elders suffering dementia and/or Alzheimer’s disease can very well identify with the plight of Loman’s own family: his stalwart, faithful wife Linda (Gina Pareño) and his two equally lost sons Biff (Yul Servo) and Happy (Ricardo Magno), whose love for their father vie with their own sense of buried anger and growing despair.

The transition from the present, where the Loman family is facing seeming poverty and looming debt, to a happier past where Willy was the leading salesman of his time, was considered radical in Miller’s era. In this production, director Chris Millado employs lighting and the occasional changes in wardrobe to show such transitions.

Changes in time also occur in stream-of-consciousness scenes where Willy may not necessarily be reliving the past, but communicating with his late and more adventurous older brother Ben (Ding Navasero), about his current travails.

This minimalist approach can be confusing, forcing the audience to rethink for a few seconds which era of the Lomans’ lives is being depicted.

At the end of the day, though, it is the acting that carries the momentum forward and allows the audience to see bit by painful bit where the roots of false hope were planted, leading to the revelation of a supreme betrayal that would tear the family apart.

This particular production is ponderous, almost deliberately slow, as if to give the audience every precious moment to catch the dialogue and take in the emotional volcanoes seething and exploding on stage. The journey is excruciating: In their current circumstances, with Willy facing forced retirement and his two sons never having lived up to the promise of their youth, the entire family seems stuck in a pit they can never crawl up from. And if they do try to claw their way out, the slightest of words can cause another explosion.

And this is the point where the happier if misguided past could have balanced it. True enough, those scenes show Willy at his finest form—charismatic enough to sell pipe dreams to gullible customers, and his adoring boys rightly or wrongly following in his footsteps. The good looks, charm and silver tongue of the Loman men were supposed to be their currency to get ahead in life—and mundane things like hard work, integrity, ethics and a high school degree could be shunted aside.

The Lomans believed they were facing a future where Biff could get a college scholarship without doing his math. Willy, in particular, who was combing the American countryside to do sales, thought his success would never end.

The actors do their best to navigate the emotional realities in both eras. But again, it feels like they are grounded way too firmly in the disappointing present. The darkness hangs over them like a fog they can never escape from, and this thread of sobriety seeps into the past, which should have been more jubilant and carefree.

It’s like an undercurrent marking the characters’ inevitable sad destiny at a time when there was no reason for it. Thus, the actors come off as playing their parts like they were meant to be losers from beginning to end.

On one hand, the recurring sense of distress wrings out powerful performances from the cast: Pareño’s stalwart wife who hangs tough, championing her husband over her sons; Servo’s culminating breakdown when Biff sees his father at his most human; and Magno’s lackluster nature as his character Happy loses his sorrow in meaningless affairs.

On the other hand, this undercurrent does not allow us to see a more distinct contrast that could have heightened the tragedy even more. Servo’s Biff is a spoiled brat from the beginning—it doesn’t take a genius to see the heights from where he would fall. His interpretation also obscures the blazing powers of persuasion of the young and popular athlete who could rally the townspeople to his side.

Josef’s sad-sack demeanor and his inability to gain his lost place in the sun can tear at your heart. But the dourness lingers even during Willy’s supposed heights, when he was conning customers to buy his products and persuading women to share his bed.

Interestingly, one character who is able to make the break between the past and the present is a supporting one: Bernard (JV Ibesate). The insecure nerd perpetually ridiculed by the Lomans during their glory moments has transformed into a confident lawyer by the time of their downfall. However, his new stature and accomplishments have not removed the love and concern he once had for his former buddy, Biff.

This looming darkness is what makes certain bits of profound dialogue jarring.

The final scene, for instance, at the funeral when Charley (Dido dela Paz) explains why Willy behaved as he did—how the salesman in Miller’s world was the proponent of the American Dream, and it was his calling and his cause to fight for a bigger and happier world, no matter how impossible it seemed, and regardless of the methods he used.

However, the audience never really sees that side of Willy Loman—not when he was at his best, brightest and most reckless.

There are other themes in this production that transcend Miller’s critique of the American way of life. The dynamics of family relations, painful personal growth and disillusionment, and the need to break out from a very tortured past to move forward in the present—“Pahimakas” does offer in-depth explorations of these issues in the Lomans’ collective journey.

But, on a more fundamental level, a greater sense of contrast showing the evolution (or devolution) of the characters could have made this somber play even more powerful.