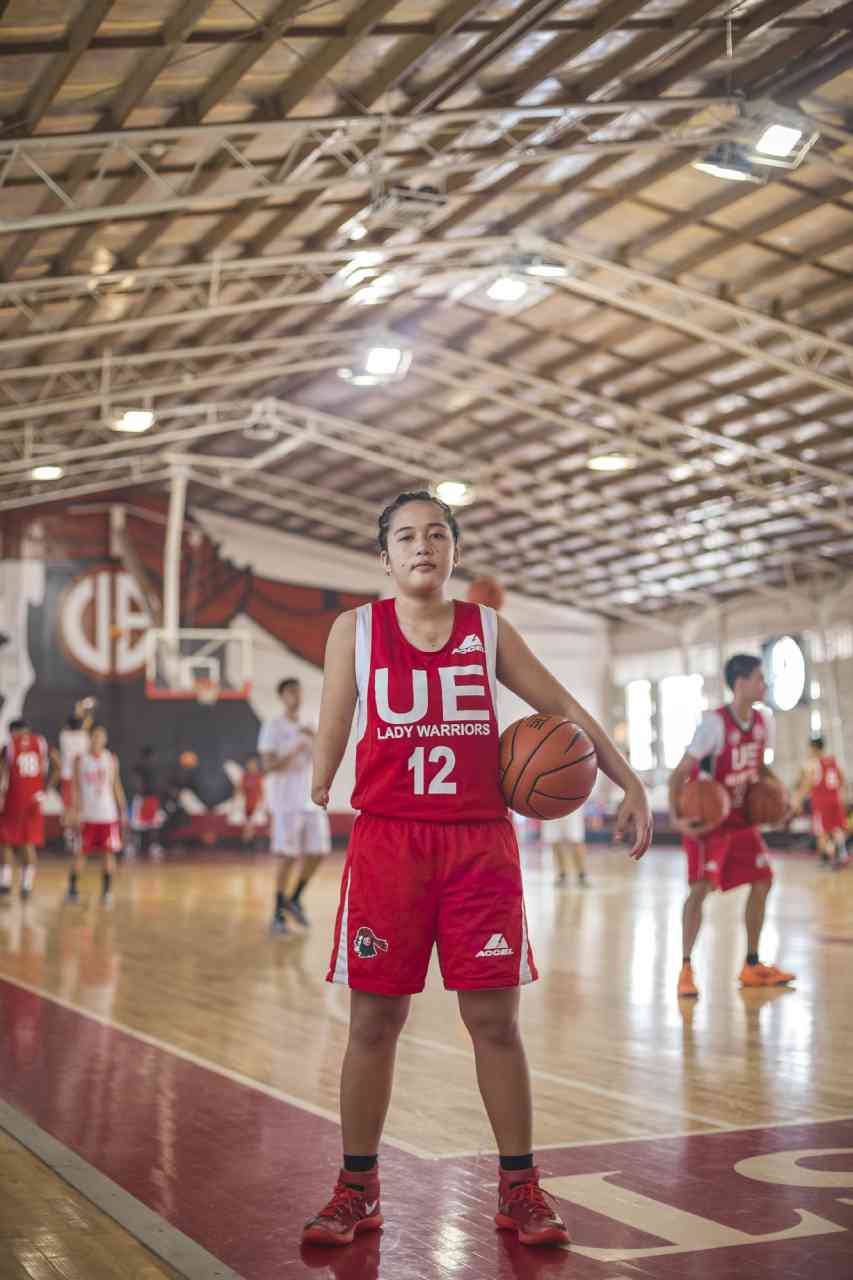 Varsity player Marie Fe Sampaga admits the teasing still gets to her. When a player from the rival team called her “putol” (chopped) in a recent game, Sampaga recalls it took a lot of restraint for her not to hit back.

“I cried after the game,” she says. “Gusto ko gantihan, gusto ko suntukin (I wanted to punch her),” she adds.

Born with an upper limb reduction deformity (a birth defect that occurs when a part of the arm fails to form completely), Sampaga has not allowed her physical limitation stop her from doing well in sports.

Although only her left hand is fully functional, this 17-year-old college freshman has made basketball look so easy.

Tagged a “one-arm wonder,” Sampaga seems to be gifted with a natural shooting ability and game smarts good enough to merit an athletic scholarship from the University of the East (UE).

Her game debut with the University Athletic Association of the Philippines (UAAP) this season received positive reviews from the crowd, except for that offensive name-calling. The offender eventually apologized.

Says UE coach Ai Lebornio of the incident: “I reminded Sampaga that she should ignore such teasing. She should not stoop to their level.”

While it was an isolated incident, Lebornio knows it could make the player too self-conscious to play well.

“I told her not to think about her disability because she can do things normal people do,” says this coach. “She’s very good. She just needs to believe in herself more.”

Sampaga’s confidence however reasserts itself when she knocks in those baskets. Back in high school in her hometown in Nasugbu, Batangas, she once torched the hoops for a career-high 40 points.

But it’s only now that she’s had the chance to undergo rigorous basketball training, as she continues to perfect that one-handed jumpshot with the Lady Warriors.

Daily workouts with her teammates find Sampaga going through the same routines, from several reps of draining push-ups to jumping rope, which she does by taping one end of the rope to her arm.

“I used to think that I couldn’t do it,” she says. “In Batangas, I practice shooting and lay-ups, but it’s my first time to have this kind of training. It’s a challenge.”

The third of eight siblings, this basketball wonder picked up the sport from an older brother when she was 7.

“My brother made me play in pick-up games and in [barangay] leagues even if the teams were composed only of boys,” Sampaga recalls. “I started to like the sport. So my brother said maybe basketball could help me go to school.”

Life had been tough on the Sampagas. To support all 10 family members, work took precedence over school. Not one of the Sampaga siblings made it past high school.

Sampaga’s father Celestino is a construction worker, while her mother Jennifer, who has polio, is a full-time homemaker. Despite life being a daily struggle, the basketball player has always been determined to finish her studies.

“I kept thinking that maybe basketball can get me into college,” she says.

When Sampaga’s Batangas varsity team had a tune-up game with the Lady Warriors last year, Lebornio admits that she had reservations about the one-handed player and wondered if she could really play.

As it turned out, that one game was enough to impress the UE coaching staff.

“Noong nakita ko na, ibang klase maglaro yung bata. Winner talaga, fighter (When I finally saw her play, I realized that she’s a winner, a real fighter),” says the coach. “She stood out from her team.”

Right then and there, Lebornio asked Sampaga to try out for the Lady Warriors, an offer the player had always dreamt of, even if it meant leaving her family behind.

She had always lived in the countryside, Sampaga recalls thinking. Would her mother allow her to leave for the big city?

She need not worry; her family gave her their full support.

So this past summer, Sampaga moved into the UE dorm, enrolled in a business management course, and has since been living the life of a student-athlete.

Sampaga is bent on honing her skills, noting that she needs to work on her dribbling and defensive game. Her coach and teammates, however, add that her confidence should also be given a regular boost.

“She’s got a big heart, although her self-esteem sometimes gets affected by unkind comments. So we make sure to keep her motivated,” says Chan.

Adds Lebornio: “I try to make her realize that people don’t see her disability, but how she has overcome it. She plays like any normal person.”

For all that attention, Sampaga thinks the fuss shouldn’t be about her at all. All the sacrifices she’s done so far—from uprooting herself from her hometown to balancing her studies and sport, to dealing with the praises and the put-downs—will hopefully lead to a better life for her family.

“Maraming challenges. But I’ll keep going to help my family out,” she vows. •