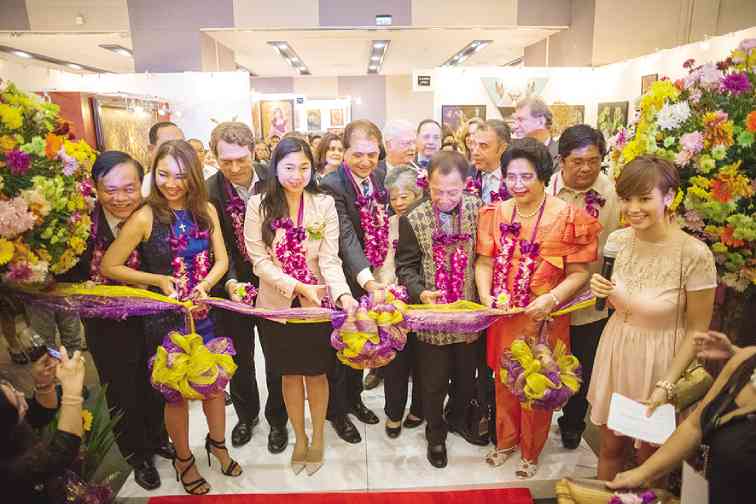 TAGUIGMayor Lani Cayetano and chair Felipe de Leon Jr. of the National Commission for Culture and the Arts lead the ceremonial ribbon-cutting.

There were art enthusiasts who headed straight to Leon Gallery’s booth that featured masters such as Fernando Amorsolo, Vicente Manansala and José Joya at the ManilArt 2014 annual fair held in Taguig City until Sunday.

A New York-based couple that transferred recently to Manila heeded friends who suggested they ask around first before investing in a painting and have their art fix.

A Paris-based working girl on a jaunt to the Philippines was ecstatic about chancing upon the exhibit since she had been monitoring Filipino artists who caught her attention on the Internet.

Delan Robillos, gallerist and cultural-heritage advocate, mentioned these cases to stress how difficult it is to define either a market or a trend for art.

Robillos, who directed ManilArt 2011, became visibly uncomfortable and evasive when Inquirer Lifestyle asked about these subjects.

“At the end of the day, ano ba ang Humanities? You appreciate what you see and know what you like, without necessarily buying an artwork,” he explained.

“Art is very personal. You might like abstract and I [don’t], but I cannot tell you not to like abstract just because it does not communicate with me,” Robillos added.

This year’s theme “Crossing Borders” is an effort to convey advocacies of artists represented by 30 art galleries that participated in the event held at the SMX Convention Center-Taguig and SM Aura Premiere. ManilArt 2014 is the sixth of a yearly project.

Robillos maintained that while messages conveyed by artists are deeply personal, this year’s event tackled such heavy geopolitical issues such as climate change and the environment.

Romulo Galicano’s “The Triumph of Life Over Death” displayed by Gallery Nine appeared to be the centerpiece of the fair.

Measuring 30 by 70 inches, the oil-on-canvas “study “followed a counterclockwise movement/story of death and decay, and how people turn to their faith for hope and the strength to ensure that life goes on.

Inquirer Lifestyle chanced upon Galicano who said he asked kasambahay and some of his late wife’s relatives who happened to drop by the house last Christmas to pose as victims of Supertyphoon “Yolanda” for his work.

Before starting it, the Cebu-based artist participated in a group effort last year that raised P5.1 million for Yolanda victims with the help of businessmen-benefactors.

“I cannot deny we artists have an obligation to our country and the environment; to use our craft to help others,” he said.

Notable in his work is a pair of vertical lines located right of center that slices through a group of mourning women— some carrying a cross, a rosary and a Santo Niño image.

“The vertical lines represent upward movement of hope and redemption,” Galicano explained. “Some warned that I was destroying the painting when I put them. But those lines are part of my poetic truth, part of my point of view as an artist.”

One statue has the infant Jesus donning a red crown and cape with what appeared to be a Power Rangers costume.

Robillos meanwhile, described as “disturbing” Bryan Teves’ oil-on-canvas painting (48” x 60”) from Gallerie Anna titled “Trusting Too Much Kills You” that had a young woman with an apple on top of her head and an arrow that obviously missed its target and pierced her forehead instead.

Robillos said these are just examples of how artists are “crossing borders” to get their statements across.

He noted that the art community has become “very conscious” of current events and how these shape the way people think and act.

“We don’t want to think that artists and galleries can remain apathetic in the face of critical issues,” Robillos said.

Given the spectrum of opinions among artists, ManilArt 2014 also allowed as much room as possible for expression.

This democratization, Robillos said, was behind the decision to “push and promote the younger ones” apart from more established artists who had their own booths such as sculptor Ramon Orlina and painter Antonio Austria.

Robillos admitted the event ran the risk of having artists who would not be considered profitable if sales were the main issue.

Some artists’ appeal might not be universal but their works possess a certain quality that ought to be noticed.

Still, there are questions from the curious that beg to be asked.

Like, are there artists more popular or sought after than others? Yes, Robillos replied, and ManilArt simply refers queries to the booths carrying these artists.

And how much does good art cost nowadays? Robillos pointed out it would be difficult to talk about specific amounts.