Tom Cruise to MiG Ayesa in ‘Rock of Ages’: ‘I hope I live up to what you do’ | Inquirer Lifestyle ❮ ❯ 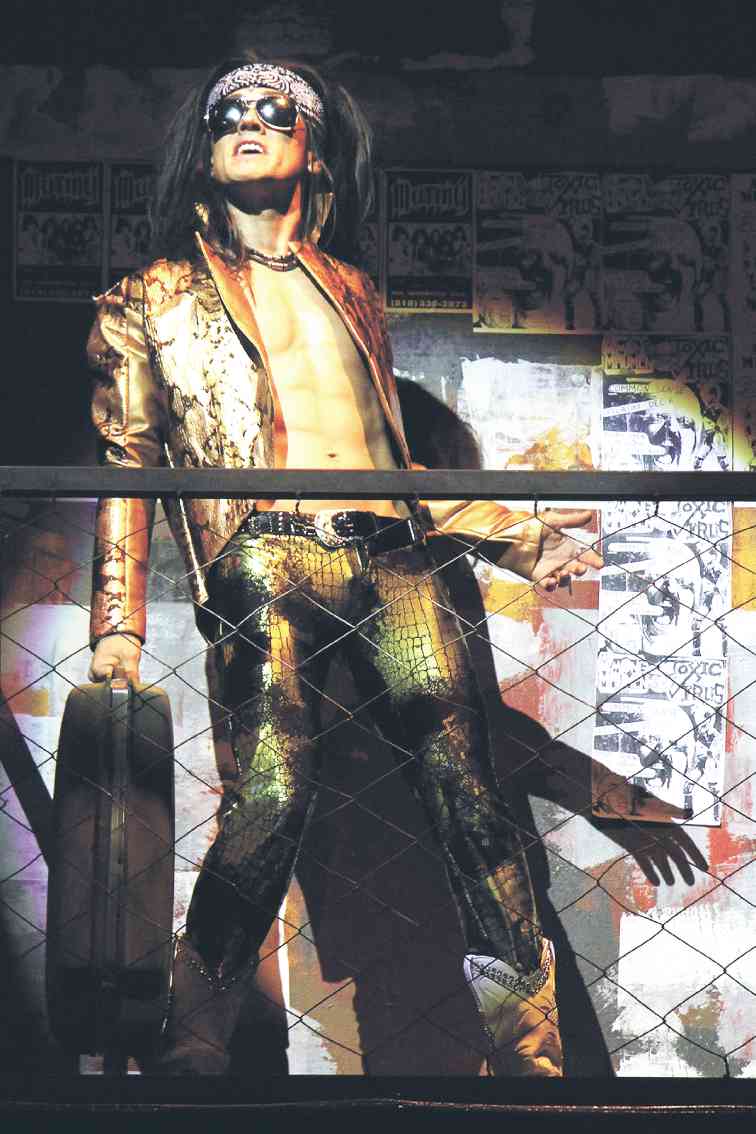 “STACEE is the rock star I want to be,” says MiG Ayesa (left) on his character

Tom Cruise to MiG Ayesa in ‘Rock of Ages’: ‘I hope I live up to what you do’

It was the enviable stories of a college classmate who, as an actor for commercials, was earning a hundred times more than he did that lured MiG Ayesa into the world of theater.

Meanwhile, Kayla Rivera thought her chances of making it on stage were nil after her self-described first “horrible audition” for the Atlantis Theatrical Entertainment Group.

Had fate played its hand differently on Ayesa, the West End musical performer who earned critical raves for his stints in “Rent” and “We Will Rock You” could have ended up as a well-paid video producer. And Rivera, the balikbayan talent from Canada, might not have gone beyond her initial passions for singing and show business.

But both artists have successfully expanded their reach beyond their comfort zones. Ayesa and Rivera will show their love and flair for the dramatic arts in the special one-week rerun of “Rock of Ages” at Meralco Theater from Oct. 31 to Nov. 9.

Ayesa reprises his role as Stacee Jaxx, the “rock god” on whose shoulders lies the salvation of a small club on the Sunset Strip in California.

Rivera, joining him in the Atlantis production for the first time, plays Sherrie, the innocent, wide-eyed girl from the Midwest who is forced to work as a club stripper.

“Theater is exciting, and it stretches you,” says Rivera, a naturally gifted singer whose original dream was to pursue a career in show biz despite a very down-to-earth childhood. “My mom is Filipino, from Pampanga, while my dad is from Romania. She is an accountant, and he, a machinist. But my mom sings on karaoke and I started singing with her when I was 3. I started taking singing lessons when I was 9. We watched Philippine TV shows in Calgary, and I saw that there were many Filipino singers in the Philippines.”

That mixture of wide-eyed wonder and apprehension upon entering a very different world is something Rivera shares with her character Sherrie.

Ayesa points out the similarities. “Sherrie is a sweet girl who comes to Hollywood in the ’80s, and then starts working in a rock club. She’s like a bright, shining light of hope who lives in LA. Kayla brings that innocence to the show—it’s not a put-on.”

Ayesa’s enigmatic Stacee Jaxx is a dream come true, a hope vicariously fulfilled, although with a few restraints. “Stacee is the rock star I want to be,” he admits. “I had my own garage band in high school. Billy Joel, Stevie Wonder, Queen, KISS—they were my influences. But Stacee gets to be the ultimate rock star living the dream. And I can’t be like that.”

Ayesa is referring to the excesses of his superstar character.

In fact, many who had seen him perform the role in the United States and the Philippines would have thought differently—the man seemed to live and breathe the part.

Among them was Tom Cruise who paid Ayesa a visit backstage during his performance in LA.

“Tom Cruise was about to do the film version of ‘The Rock of Ages,’” Ayesa recalls, his voice yielding a hint of awe. “I was the first Stacee Jaxx he saw onstage. He told me, ‘I hope I live up to what you do.’ He was very gracious, very humble, very sweet. It was amazing, and it was an honor meeting him.”

It was not the first or last time Ayesa would meet royalty of different stripes. He was only 21 when he performed for a London audience that included Princess Diana and her two sons, Prince William and Prince Harry, back then just small boys. His role: the 1950s pop idol Ritchie Valens in “The Buddy Holly Story.”

“I first did that part and that show in Sydney,” Ayesa recalls. “Then the English producers saw it and invited me to be part of the London cast.”

Another milestone was landing the lead role in “We Will Rock You,” which at that time “was the biggest show in town.” That turning point removed whatever doubts and fears Ayesa might have had in leaving his home in Australia.

“My wife and I had just moved to London with a couple of suitcases from Sydney. We didn’t know if we could survive. Suddenly, there I was on opening night. My wife and members of [the legendary rock band] Queen were in the audience. There was a standing ovation… I felt I made it to the right place at the right time. It was an affirmation of my choices.”

Ayesa enjoyed similar successes when he returned to Australia later on, as he kept getting calls to appear in major productions such as “Grease,” “Rent” and “The West Side Story.”

One interesting fact: Ayesa did not take up dramatic arts in university; he graduated with a degree in Journalism at Macquarie University in Sydney.

“I wanted to be a film editor,” Ayesa now grins at the memory. “After school, I was working in a candy bar for $6 an hour. Then a friend started earning thousands of dollars doing commercials for sodas and other stuff. I was like, ‘What is this?’ I decided to get an agent who’d get me a job—I just wanted to get into commercials to get that extra money.”

Fortunately, his agent also sent him to stage auditions; one casting call led to another, and then that life-changing stint in “The Buddy Holly Story.”

Rivera has likewise had her fair share of unexpected opportunities.

She grabbed the limelight in the hit thriller musical “Carrie” after the lead star got sick.

“It happened after opening night,” she recalls. “I got called in and I learned the part within the week. That role was memorable for me but in a very surprising way.”

More surprises just might await them as they continue to explore the theater horizon. They have set their sights on more dream parts. For Rivera, it’s the hit musical “The Wicked.” For Ayesa, it’s Jean Valjean in “Les Miserables.”

Ayesa says, “I sometimes take acting jobs because they are beyond my comfort zone. I hate being pigeonholed. I believe you can have your cake and eat it, too.”