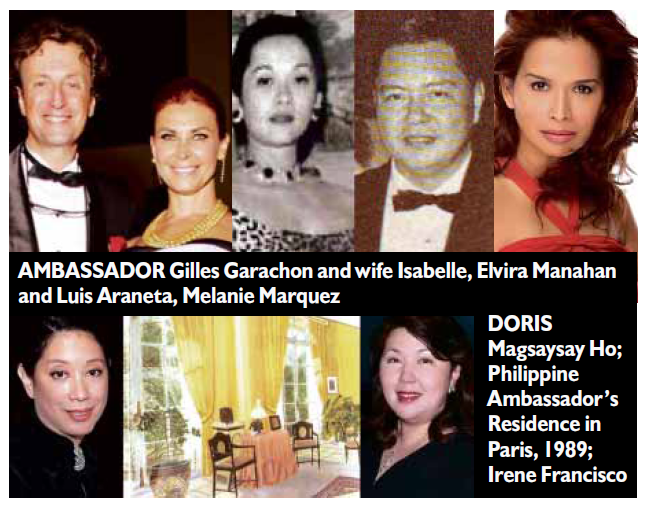 Class is making a comeback

Your mantra for the week: “I forgive, I forgive… Now I am ready to receive.”

Today is the day you cross over. It means you will move from the outer to the inner, from the mass mind to the God mind, from the senses to the Spirit within, from the limited to the limitless.

You are crossing over from hate to love, from anxiety to peace, from disharmony to balance, from the unseemly to beauty, from resentment and hurt to forgiveness.

You are passing through and crossing over—moving from the lower self to your higher self within you. If the Bible says, “The truth shall set you free,” the truth is, you will never be free until you have forgiven. For not forgiving makes you want to do something unkind to those who have wronged you.

As you think and feel this way, you attract into your life more wrongdoing against yourself; to avoid these, you must forgive, for if you decide to retaliate, you start a new cycle of negativity in your life.

“Revenge is mine,” said the Lord. You need not do anything against your so-called enemies because they can also be spelled any-me, which means that your enemy is a mirror of something in you that has to be recognized and corrected.

After this has been done, you will find it most easy to let go of unforgiveness and, therefore, be able to cross over to a better life through your higher self. There you will find unlimited good where once you lived in lack and limitation. Before you will lay a limitless Universe where there are no encumbrances to your desires.

It is wonderful to end each day with a prayer of forgiveness for those who might have hurt, disturbed or caused you anxiety or discomfort. Do not be afraid to forgive because you are doing it for yourself; forgiveness does not mean that you must like the person, but you have to love him/her because loving means wishing others well.

Picture them now and tell them silently, “I desire for you a wonderful and prosperous life. I set you free to live a life filled with loving relationships that bring you joy, comfort and peace. I desire for you success like you’ve never known before. I know that in doing so, I have opened the doors to a happier life for you. Whatever differences we have had in the past are now dissolved.”
The rewards include peace of mind, a heart free of resentment and a life filled with untold blessings. For when you recite a positive affirmation or prayer for others, oftentimes you are the first recipient of the benediction.

This is the crossing over to your heart’s desires. For only after you have forgiven do you open the doors for the manifestation of your fondest dreams. For it is then, and only then, that they do come to pass.

Social event of the month

Indeed, the event lived up to its promise. How could it be otherwise, when the chairs included Irene Martel-Francisco, Nedy Tantoco, Dedes Zobel and Doris Magsaysay-Ho, who is also the vice chair of the Metropolitan Museum of Manila Foundation, Inc.

Doris has been one of my all-time favorite ladies, whom my mother also much admired.

The most prominent French connection to the Philippines is the San Sebastian Church because Gustave Eiffel—of Eiffel Tower fame—was responsible for the design and construction of the church in 1875.

The next is through the families with French ancestry like the Gastons of Negros Occidental, the Khans of Manila and the Lhuilliers of Cebu. I remember Angelita Lhuillier so well because she had an astrological reading with me in the late 1970s. She was such a beautiful lady.

The painting exhibit in the MET Fete was truly outstanding. Later that evening  works of prominent artists like Juvenal Sansó and Nena Saguil were projected on the walls surrounding the well-appointed dining area.

I had the pleasure of meeting French Ambassador to the Philippines Gilles Garachon and his wife Isabelle, who was honorary chair of the event. I got the chance to tell both that their residence was my second home for at least twice a week during the days of Elvira Manahan’s “Two For The Road” TV show.

The couple, in turn, said they truly appreciated the way the house was built. I informed them that many of their favorite nooks and corners of their home were Elvira’s ideas. It was, of course, Luis Araneta who designed the house. But the interiors were a joint effort of Elvira and Luis.

In the early ’70s, Luis was my boss in my days as columnist Conde de Makati. I will always remember having been paid a paltry P25 per column. It was not even enough to pay for my coffee and cigarettes.
At that time, I smoked four packs and gulped down 40 cups of coffee a day. Had I not given up this habit cold turkey in the latter part of the ’70s, I probably wouldn’t be around writing for Inquirer Lifestyle.

I mingled in a crowd of 350 ladies and gentlemen who were all dressed to the nines. I had an interesting conversation with Gigi Montinola, former president of Bank of the Philippine Islands and now chair of Far Eastern University; he was totally unaware that I once taught at FEU when National Artist for Literature Alejandro Roces was dean of its Liberal Arts department.

I also enjoyed talking with Tito and Marit Yuchengco; Miguel Perez Rubio whose daughter-in-law Bettina runs Makati Garden Club; Susan Reyes, social secretary of President Aquino; Veanna Fores, who has the charm of her mother Baby Araneta Fores, and the forthrightness of a true Aries.

Veanna was with cousin-in-law Korina Sanchez-Roxas. I also bumped into Josephine del Gallego, who is decorating her new home in San Diego which she says, “is still all in white” like her former mansion in Punta Fuego.

Although Nedy Tantoco was unable to attend, she asked her closest friends Mario Katigbak and DJ Lopez to play host for her table with other friends like Gen. Sonny Yan, Dulce Cepeda, Antonio Leviste, Ana Tirol and Mel Meer.

Josie Natori was  present. She was in town for the Manila FAME design and lifestyle trade show,  with a top executive from Saks Fifth.

What a delightful evening it was—so reminiscent of the days when one looked forward to attending such events until the Marcos “New Society” took over and changed all that.

I am happy that class is making a comeback!

A popular  TV host recently asked a former Sampaguita superstar: “Is it true that you had an affair with my tito?”

The superstar, with no hesitation said, “No, but I did have an affair with your father.”

The TV host’s jaw dropped but still managed to quip, in her usual manner, “talagaaa?!”

I first met Melanie Marquez when she was 16—she was brought over by a friend who was very much in love with her but was hesitant to court her because she was still a minor.

She stared back at me and didn’t say  a word. I didn’t know then that the English language was her handicap, but this did not hinder her from becoming Miss International and a first runner-up in the 1986 Ford SuperModel of the World contest.

I guess the international judges found her description of her “long leggedness” charming.

I watched her last week in a “Follow That Star” documentary and I was totally enchanted by her authenticity, even if she could still not get her English right. I saw her as intelligent and compassionate (she has a foundation that takes care of indigent children).

Toward the end of the docu she introduced all her six children and how each  had a different father from different countries: “Hindi ba Miss International ako, ’di lahat ng anak ko international din.”

I will never judge Melanie ever again, because she is not a book—but certainly one for the books!