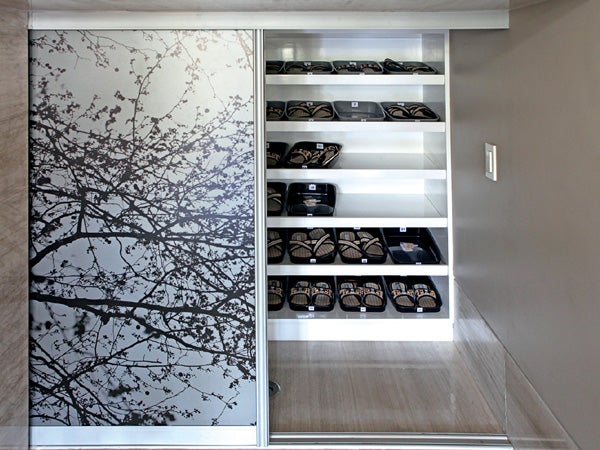 Guests’ shoes in the main living room can be unsightly. The Almario sisters used Mayie Delgado’s photo to disguise the shoe cabinet. Photo by Tonette Jacinto

ASK ANY design consultant or homeowner who’s “OC” (obsessive-compulsive) about tidiness and removing clutter at home, and chances are, he or she will say it’s just a matter of attitude.

Our homeowners here talk about letting go of  possessions that remind them of the past so they can move on.  Others say how the urge to fulfill desires can lead to accumulation and the build-up of things, which gives one a mere illusion of security.  The conclusion: anything more than what you need is clutter.

“How to declutter is a philosophy more than a recipe,” says Johnlu Koa, founder and CEO of the French Baker chain.

He recalls that when his family moved to their two-story home in a subdivision after five years of condo living, there was so much pile-up of garments, toys, objects that needed to be organized.

Initially, Koa created a bodega to store the clothes and objects that they might find use for again. “As the years went by, we accumulated more things as our kids were growing up and we were also growing older. The bodega became too small!”

To resolve the problem of molding in basement storage, Koa bought humidifiers.  He recalls a friend who thought the attic was the best place to put his wife’s excess leather goods. Koa says that the heat would warp the luggage and fray the linings of designer bags.

Ultimately, the basement or attic is not the solution. One has to remove sentiments attached to objects and let go. As a longtime professor of marketing and entrepreneurship at the University of the Philippines, Koa applies two management formulas for decluttering:

The Pareto Principle. In management, it’s called the 80/20 rule:  20 percent of something always are accountable for 80 percent of the results. (It’s similar to quality management pioneer Joseph Juran’s theory of  “the vital few and trivial many.”)

“If you’ve got 100 pieces of clothing, only 20 percent will make sense to you,” explains Koa. “The 80 percent will not be of benefit.”

JIT (Just-in-Time) Principle.   Developed by Toyota, this inventory system  was developed to avoid wastage  and improve efficiency.  The basic principle is to make and use only what is needed, when needed, and in the amount needed.

On home application, Koa explains, “We cannot continue buying things in anticipation of a future need. (It can lead to waste.) We buy things ‘Just in time’ before we need it and not too long before we need it. Window-shopping allows us to see what’s available but not necessarily buy what we might need in the future. Assign some sort of an ‘expiry date’ on things that tend to clutter—food, clothing (1-2 yrs.), shoes (2 yrs.), bags or luggage, toys, magazines, maids’ uniforms, towels, bed sheets, pillows, linens, etc,. We cannot attach too much sentiment to those things.”

We cannot continue to postpone organizing and “decluttering.”

Before we buy something new, we should plan  to get rid of existing stuff, should space be a problem.

Eliminate is the twin of accumulate.

We need to be constantly reminded of our commitment to declutter. (Nudge family members who procrastinate.)

Make decluttering the job of the boss so that everybody else will follow.

Koa’s wife, fashion entrepreneur Marilou, has a friend in Hong Kong who sells her used designer accessories in Hong Kong.  “We easily get attached to things. The moment we let go, then there’s freedom.”

In these COCOON photo shoots, other homeowners  show their own methods of decluttering.