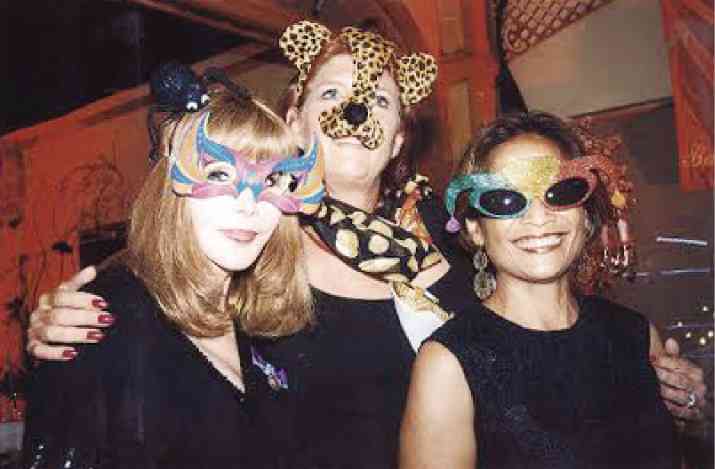 Chaine event a gastronomic experience of the first water

The Cebu Chapter of La Chaine des Rotisseurs held a fellowship dinner with a Halloween theme at Pino restaurant. It was well-attended by a large segment of the membership.

Guests gathered at the ground level for champagne and delicious appetizers like shelled rock lobsters, huge prawns and succulent oysters, with some exciting sauces to dip them in.

The dinner itself was at the second level, accessible through a curved wooden staircase adorned with pumpkin jack-o’-lanterns, simulated tarantulas and bats in flight, and miles of white cotton to conjure eerie cobwebs.

Tables were draped in black satin. Guests had been asked to come in black, and if possible with imaginative masks, the best of which would be given prizes.

Seated with Michel and Amparito were Alliance Francaise de Cebu director Louis Thevenin with his wife Honeylet, his parents Yves and Genevieve Thevenin, and sister Jeanne Nicolas—all of whom had come from Lyon to spend a vacation in Cebu.

There was a carving station for the US prime rib, and another just for the cheeses, plus a third station that dispensed pasta with all imaginable condiments. The evening’s favorite dishes, though, were the scallops and gratin, and the Chilean sea bass simmered in butter and white wine.

Coming up for La Chaine in Cebu is the Dec. 18 Christmas gala at the ballroom of the Marco Polo Plaza Hotel. The strictly formal affair will also serve as the 21st anniversary celebration of the Cebu chapter.

Some 120 guests are expected to attend, seated in round tables for 10, beautifully adorned with flowers. Piano music will complete the ambience.

A Chaine event is first and foremost a gastronomic experience of the first water. This forthcoming gala will be a benchmark from the menu presented, prepared and served during a food tasting by Stefano Verillo, the Marco Polo’s executive chef.

Giving their stamp of approval were Amparito, Nestor and Winglip, to the Marco Polo’s outgoing general manager Hans Hauri, and his successor, the glamorous Julie Najar.

Julie has been absorbed into La Chaine’s membership. Her induction along with others will take place in March during another formal gala, this time at the Waterfront Cebu City Hotel. Its new general manager is a Frenchman, Philippe Frugere, who is extremely nice and has quickly made many friends in Cebu.