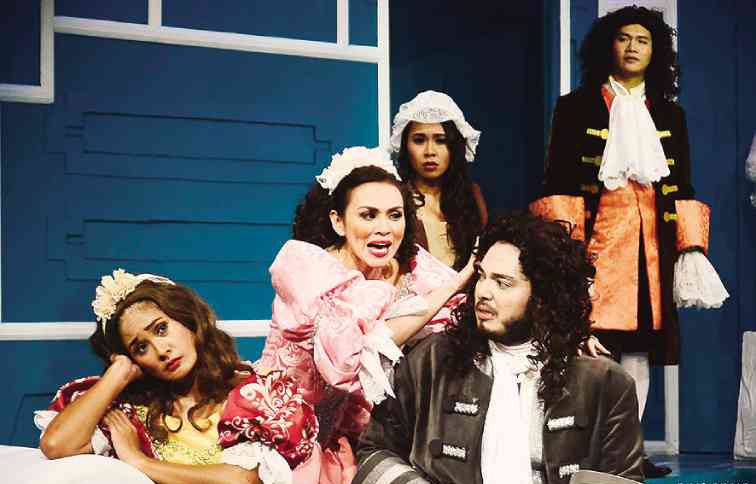 For its fourth offering this season, Dulaang UP mounted William Wycherley’s “The Country Wife,” one of the most popular comedies from the Restoration Period, which takes a look into the decadent lives of the men and women of high-society London and their all-too-human foibles. This is the first time the play has been staged in the country.

The play was written by Wycherley, an English dramatist also known for his play “The Plain Dealer,” in 1675 as an answer to the Puritan regime that was marked by hypocrisy and all manner of insincerity.

“The Country Wife” derives its comedy from banter and repartee, from camp and kitsch. What probably saves its humor from failing modern audiences is the marked suggestion of sex. Otherwise, the stilted language can get in the way of what would have been hilarious moments.

It is hard to listen in on and laugh at the witty exchanges of the characters in the English version, because some words simply sound too foreign to the audience. Some of the actors even fumbled their lines.

The set design is spacious but practically bare. The props are rather rickety; you could see the cracks in the papier mâché. What is impressive, though, is the smooth rearrangement of the set design after each scene, courtesy of Dulaang UP’s well-oiled design team.

The costume design, meanwhile, is successful in evoking the era, down to the big, elaborate hairpieces.

Pichay’s Filipino translation of the play, titled “Ang Misis Kong Promdi,” packs a tighter punch. With the language now more accessible to the audience and the material given a contemporary bent, the viewers react to it more strongly than they do to the English version.

What else made for effective comedy in the Filipino version?

Inflection, for one. In one instance, the prim yet sexually perverse Lady Fidget stresses her utterance of the word reputasyon with accent on the second and third syllables, to mean whore. The audience got it. Yet, it was still in keeping with the play’s literal translation.

The cast, by and large, deserves credit for pulling off their roles convincingly, but the archaic English does prove to be a drawback for some of them.

Prado, a Gawad Urian-winning actress, does not disappoint as the titular character. Although her raspy voice is a bit bothersome, she is engaging as the perky and curious country wife.

Comia, in the English version, charms the audience off their feet with her excellent performance. She does not let her child-sized figure be dwarfed by the towering men around her; she stands out with the spunk and self-assurance she brings to her character-playing.

But the biggest kudos should go to De Jesus, who plays the cantankerous Mr. Pinchwife. He has the whole crowd laughing with his deadly deadpan comedy and his mere presence on the stage is enough to elicit a chuckle.

Issa Litton as Alithea and Dolly de Leon as Lady Fidget also deserve praise for their on-point performances. And Arvin Trinidad, in both versions, measures up to the role of the eccentric and sexually ambiguous Mr. Sparkish.

On the other hand, men would only get a sense of their worth through the affection they get from women, which would explain their repeated dalliances whenever the opportunity came their way.

But this state of affairs is shaken when Margery develops an interest in Mr. Horner, despite Mr. Pinchwife’s efforts to keep her from the sight of other men at all costs.

Although the world has seen countless changes in the battle of the sexes down the centuries, “The Country Wife,” while set in a bygone period, still holds some universal truths that seek to challenge social norms. The fact that some ideas in the play may leave the audience bothered, or at least intrigued, means it remains a relevant, meaningful play with something serious to say—but in a humorous manner—about the ways men and women relate to each other.