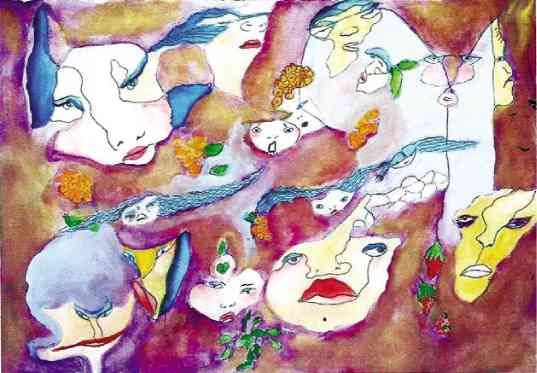 “Words are flowing out like endless rain into a paper cup/ They slither wildly as they slip away across the universe/ Pools of sorrow, waves of joy are drifting through my opened mind/ Possessing and caressing me

It’s rehearsal time again for the family band, ignominiously called Mol and the Molesters. Molesters, not in a sexual sense but noisy, noisy! Mol is my son. And the grandchildren from three families, all male, are: Quinito and Carlo, vocals; Rafa, keyboard; Franco, sax; Miguel and Juaneo, guitar; and Io, drums. Practice sessions are moved from house to house to avoid noise pollution suits and gunshots.

Mol leads the band passionately and directs the practice sessions. The kids are good. I am awestruck by the band. All are instinctive, talented musicians. I can’t stop wondering how I produced such musical progeny since neither my husband nor I sang a note nor played any instrument.

The grandchildren are a mutation of genes. They are attracted to music, math and the sciences, not particularly lawyering. And no one is a serious writer or painter.

The only two granddaughters work abroad.

Frankie’s birthday, held at the CCP lobby, was one of the biggest, happiest parties ever. He is obviously loved by so many people.

Maybe because we go such a long way, I was tasked to say a few words about the birthday boy. But then, he warned me, in fact threatened me, “Don’t dare talk about me; talk only about Tessie. No one can take care of me like my wife does. I owe everything to her. And to my children.”

So what can I say—look at Tessie—she is always devoted, serene, optimistic and beautiful. Tessie is happy clearing the way for Frankie, making sure he doesn’t stumble, has been fed and injected, neatly dressed, his fontanel covered with a cap, steering him away from people he may be tempted to insult. She is always in clear and present danger that he may fall on her and flatten her. Indeed, some marriages are made in heaven, and that is Tessie’s marriage to Frankie—heaven—for Frankie.

“Sounds of laughter, shades of life are ringing through my open ears/ Inciting and inviting me/ Limitless undying love which shines around me like a million suns/ It calls me on and on across the universe…

There is a pair of designer chickens roaming in the garden. The white cock has a comb that looks like a bunch of bright red mini-berries clumped on top of its head. Around its eyes the feathers are black, as if they have been boxed by Pacquiao. The female is light yellow, with a comb like a tuft of soft feathers. When it flaps its wings you will notice that, underneath, its “armpits” are black.

They are a handsome and utterly conceited pair. They were bought by my daughter-in-law from the weekend market at an atrocious price.

In the middle of the night, in the typhoon, the rooster kept crowing. The next morning we found out that the hen had laid 25 eggs! No wonder papa could not contain his pride!

The mother hen could only sit on six of the eggs. The rest were sent to a nearby hatchery to be hatched with the help of electric bulbs. Eight in all was what successfully did. The chicks are more than a month old now, all promising to be as good-looking as the original pair who are still strutting around in the garden. Every few minutes the adult cock mounts the hen—he is apparently a sex maniac, and they might produce another 25 eggs!

This reminded me of an old joke I found in my decrepit journal that is lying around. “Bakit may sabaw ang balut?” “Kung ikaw ba ang ikulong sa shell, saan ka ji-jingle?” It must be my day for hoary jokes because I found more in the same journal which I can’t resist sharing.

SEÑORA: I looked for my glasses everywhere. Look for them naman.

MELODY: It’s on your head ma’am!

The third floor of a certain mall carries second-hand designer bags—P1,000,000 for Katrina’s bag, P3,000,000 for Sharon’s bag. On Mother’s Day in Salcedo Village, they were raising funds for a certain charity. One of the numbers was a quiz. Two Louis Vuitton bags were shown and you were to spot the genuine one. A household helper won it!

No, nothing’s gonna change my world. Not illness or inflation, or old age or bad jokes.