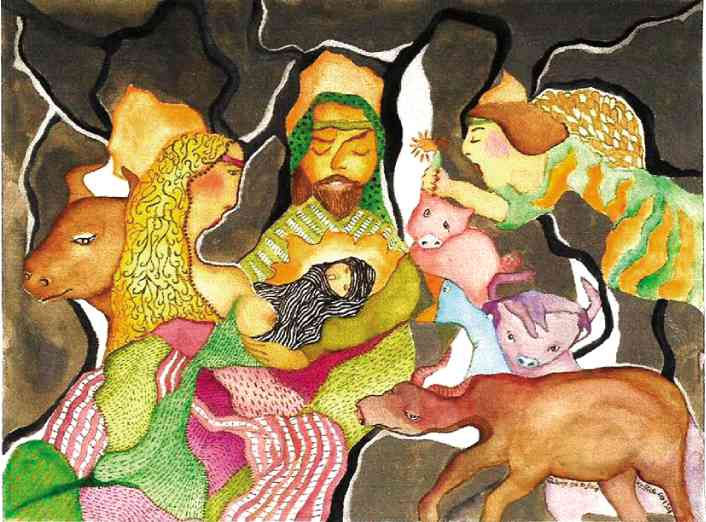 Ghosts of Christmas past

My banker son, Arcus, said that, in his experience, pretending that there is a Santa Claus who gives your Christmas gifts is cruelty to children. After believing in it completely for years, you eventually learn that those guys don’t exist. Your parents have been deceiving you all along. And are amused and laughing at their extended practical joke at your expense.

Since we have no chimney, where will Santa and all his reindeer pass—he wondered— through the window? A terrifying thought! Same with the shoes you put on the window sill on Jan. 6. Only this time it’s three strange men riding, horrors! Camels! He said he would stay up practically trembling all night, waiting in his bed by the window. For all you knew, you could be trampled to death.

Since I am a fiction writer as well, the Santa Claus drama got more and more detailed. I told my children where the reindeer drank. With a flashlight, I brought them to the dark end of our then-vast yard, where a clump of banana trees grew. I showed them the grass and the leaves that the reindeer had eaten from and trampled on in their hurry to deliver the gifts.

My kids received all the information in wide-eyed wonder and, as I found out later, also fear. Then they left betrayed. I must have been a good storyteller because they never forgave me.

I can still remember many children being afraid when they first behold a living, moving Santa Claus. This was in big department stores then (no mall yet). A dark-complexioned Santa Claus with rouged cheeks, in a thick, red flannel suit, a pillow obviously under it, and wearing a long abaca beard. Santa looked so fake and crude he frightened young children and made them cry.

Children are born innocent, and seldom, if ever yet,

encountered violence. I remember when I brought my kids to see their first movie— “The Three Stooges”—a slapstick children’s show popular in the early ’60s. With Moe, Larry and Curly hitting one another on the head with anything at hand—bottles, mallets, sticks, frying pans and what-have-you.

My kids didn’t find three adults hurting one another funny. They began to cry. We didn’t finish the movie. Since I still have no great-grandchildren, I haven’t kept track of Santa Claus and The Three Kings anymore. Maybe today’s kids have already Googled him, away.

I sort of pity children who grow up without myths and fairy tales to believe in. I can’t forget my grandchild Chin-Chin, then 5 years old, exclaiming in dismay. “You mean there’s no Santa Claus, no Three Kings, no Tooth Fairy, no God?”