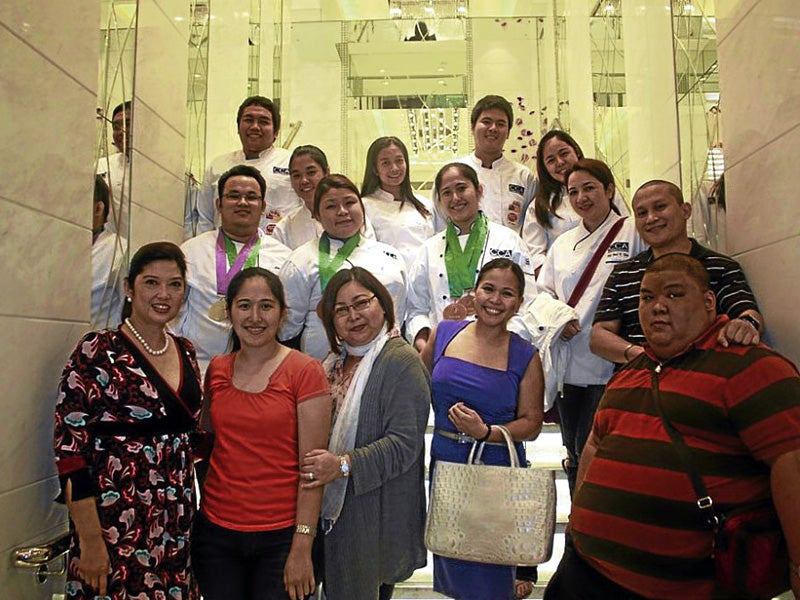 A student of the Center for Culinary Arts-Manila burned his Canadian Beef Short Ribs, but after saving and reworking the dish, got the nod of the judges and the medal

Filipinos cook up a storm in HK cookfest

DETERMINATION, perseverance, humility and skill – these are the most important elements in any competition and they are held dearly by the chef-instructors and students of Center for Culinary Arts-Manila.

CCA chef-instructors and students were among the jubilant Filipinos who gave honor and pride, not only to their schools and organizations, but also to the country in the recent Hong Kong International Culinary Classic held at the Hong Kong Convention and Exhibit Center in Wan Chai.

The competition was part of the 14th edition of Hofex, the region’s leading food and hospitality trade show. The culinary tilt seeks to promote culinary excellence, skills and abilities of chefs, cooks, pastry chefs/cooks and apprentices. Over 500 chefs from the region joined.

The pool of judges was led by Mak Kamkui of HK Disneyland Resort, with other international judges from France, Australia, Iceland, Thailand, China, Singapore and Vietnam. Over 60 local judges took part in the battle.

Mariano, assisted by another student, Eldrin Arangarin, came equipped with the necessary skill in whipping up the Canadian short ribs. However, in any live competition, some things suddenly don’t work your way. The induction stove in his working area was extremely hot that he failed to control the heat; thus his beef burned inside the pressure cooker.  One of the judges smelled the scorched meat and pointed at his direction.

“I knew at once I’m gone,” recalled Mariano. “Yet the judge was still very encouraging. He told me to find a way to save the meat.”

He did just that. He trimmed the burnt part of the meat and roasted the rest in the oven.  He then glazed it with maple syrup and served it with truffled polenta croquette and confit of cherry tomatoes and pearl onions. This got the approval of the judges.

Mariano’s amuse bouche entry was based on the four elements – fire, water, air and earth – that were tedious to work on. They were bite-size hors d’oeuvres that ought to be uniformly cut and uniquely presented.

This is Mariano’s first time to win in an international culinary competition. He won gold in the First Philippine Culinary Cup for pasta and silver for Filipino cuisine.

Martinez was calm and cool through the 60-minute live organic chicken competition. She made a three-way Tex-Mex chicken in tomato sauce, corn salsa with rice pilaf. She dished out chicken lollipop stuffed with cream cheese and jalapeño. The breast part was made into a roulade stuffed with beans, while the leg was cooked Mexican-style adobo.

This category was judged according to flavor, originality, sanitation and uniqueness, and that this dish can be prepared for daily consumption in a hotel.

“The only challenging part for me was their induction stove which was difficult to regulate. It heats up so fast. I had to adjust constantly,” said Martinez, who has a twin sister who also teaches at CCA.

Chef-instructor Miraflor Cruz was a last-minute choice for the Chinese Cuisine Challenge. Nevertheless, she gladly obliged and even garnered a bronze medal for her obedience.

For this category, Cruz was required to prepare a Chinese dish presented in a contemporary way but using classical cooking methods. A ruby snapper was the key ingredient.

Considering she was the only woman chef in the competing group and non-Chinese (some were from HK, Singapore and Taiwan), Cruz finished right on time and with flying colors.

She had to adjust the cooking time since ruby snapper has thicker flesh compared to the bisugo (ribbon-finned nemipterid) she was practicing with in Manila.

“We had very limited resources in the Philippines,” said Cruz, who was assisted by Czarina Dytianquin. “In HK, they can get the real ruby snapper for a minimum of two kilos. Unlike us, bisugo lang with 1.5 kilos as the heaviest.”

But perseverance works wonders. Even without sleep for almost four days, Cruz impressed the judges with her use of XO sauce and pumpkin seed paste.

Apart from the Chinese Cuisine Challenge, Cruz also participated in the professional Amuse Bouche category, but didn’t make it. She said she learned a thing or two from the experience.

“Competition builds character,” she said. “I learned humility. This taught me that our knowledge has to be continually upgraded so, in turn, we can pass it on to our students. In the competition, I saw others better and more daring than I was and that humbled me, because at the end of the day there are so many things to learn.”

She added: “I also learned to work in a team. During the preparations, I learned to cooperate with the CCA team. I learned to ask and value their help and opinion. We literally cried during low moments and laughed together whenever one of us received a medal.”

Overall, chef Melissa Sison, CCA academic programs manager, admitted the team was better prepared this year than their previous competitions abroad. There was a big difference, she said, in terms of discipline and focus.

As part of the team’s preparation, Sison required the participants to read Andrew Friedman’s “Knives at Dawn,” an inspirational book about competitions. It was recommended by her good friend, chef David Pardo de Ayala.

“The book was important because they couldn’t get the discipline I wanted,” said Sison. “The kind of humility I wanted. Sometimes as chef-instructors, we tend to assume we know everything, but we don’t. As a chef you tend not to listen to other people critiquing you.”

Generally, Sison explained, a week before the competition, you’re thinking differently – either you’re too excited or too nervous but, for whatever it is, your judgment is not how you would normally judge things. Sometimes you think a dish is salty but it might not really be salty.

Weeks before the competition, Sison made sure all action plans were set. They took photos of the dishes, wrote down the comments, the adjustments that had to be made, and the presentations. The participants repeatedly practiced the physical motion of preparing and cooking the dishes.

“Even if CCA is a 15-year-old school, with a new team [new faculty, new academic head], it felt like we were a new culinary school joining a competition. We feel great with what we have accomplished in Hofex, considering how new and inexperienced we are in joining competitions both local and international,” she said.

“Even if some of our members didn’t make it, I’m happy it was documented,” Sison said. “The preparation will be improved whoever may join next year. It will be in the library. Of course, not everybody would be used to that kind of system. It takes time.”

Also seen supporting and cheering for all Filipino teams competing in Hofex was chef Dennis Hipolito, who’s based in Singapore and working for the Yum company.