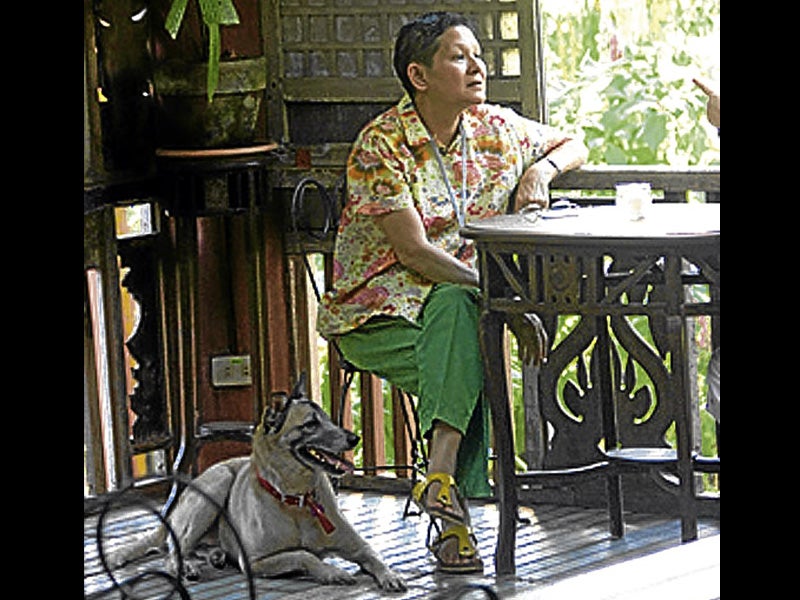 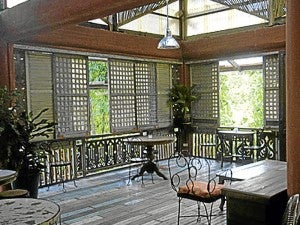 ABOUT six months ago, on a trip to San Pablo, I was told that Kusina Salud had closed its doors. I thought it was sad because the place is owned by the Tesoros, Patis and Tito, and Patis was the organizer of Viaje del Sol, a tour promotion of the Southern Tagalog provinces of Laguna and Quezon.

Viaje del Sol produced a map that directed tourists to where they could dine in and stay at or around the sites of major tourist attractions. And one of those dining places was Kusina Salud, run by the Tesoro’s daughter Nina, and her husband and chef, Paul Poblador.

But one day in April, a text message announced that the Tesoros had reopened the restaurant and renamed it Patis Tito Garden Café. It would take me several calls to know how to get to the place because it is off the main highway, and one has to enter Barangay (village) Sta. Cruz Putol and then drive on for some minutes before you saw the restaurant sign.

Patis was surrounded by her dogs when she greeted us. She was so much thinner than when I saw her last, and she said that losing weight was important to control her diabetes. She doesn’t stay in San Pablo, she said, because she still has to attend to her clothing business where she mainly designs gowns, her specialty being the formal baro’t saya.

The restaurant is airier and looks bigger because of the high ceiling with touches of tiles on walls designed by Patis. Local artisans did some of the wood cutouts that decorate arches and walls. The place has the feel of an old provincial home, especially the mezzanine area with its capiz windows, wooden floors and batibot chairs. 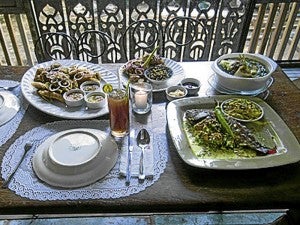 The kitchen is separate from the dining area. And there, Patis enthusiastically talked about the food and introduced the chef, Frank Rabara, who was sous chef at Kusina Salud. He took his culinary studies at a maritime school and then cooked in the kitchens aboard ships.

Rabara is Ilonggo, and when he described the dishes that we ordered, it was noticeable that he put touches of Ilonggo flavors to some of them. For the Inasal Diablo, spicy grilled chicken, he steamed the chicken first in salt and lemongrass. The bulalo was flavored with guinamos (shrimp paste), quite unlike the simply salted boiled beef shin of Batangas.

But he did have the Southern Luzon preference for cooking with coconut milk the crisp fried tilapia, the sauce colored with turmeric (dilaw).

The appetizers all looked good to eat so we decided on a combo appetizer plate. It had vegetable lumpia, pieces of Shanghai lumpia where cheese was added to its ground meat mix and ground beef balls. And perfect for summer was the dessert, a version of Floating Island that had cool layers of macapuno, ube halaya and leche flan surrounded by scoops of mangoes. 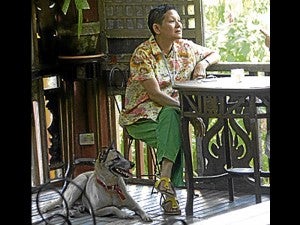 The place invites you to roam around. Apart from the kitchen, there is an exhibit area where artists and artisans display their works. Recently, an embroiderer of piña cloth was featured. When we were there, hand-woven cloths from different Southeast Asian regions were being put up. And waiting on the wings were more paintings.

Then there is the garden where not only plants bloom but which also hosts caged birds, like the rare ones with the blood-red mark on their chests as if they’ve been shot. Pretty soon, said Patis, there will be an herb garden, but a farm in the mountain provides the lemon grass and other vegetable needs of the restaurant.

Patis is especially proud of the waste management at the San Pablo restaurant. She showed me the pozo negro (waste vault) where enzymes are introduced to process waste. The result is clear water that she uses to fertilize her plants.