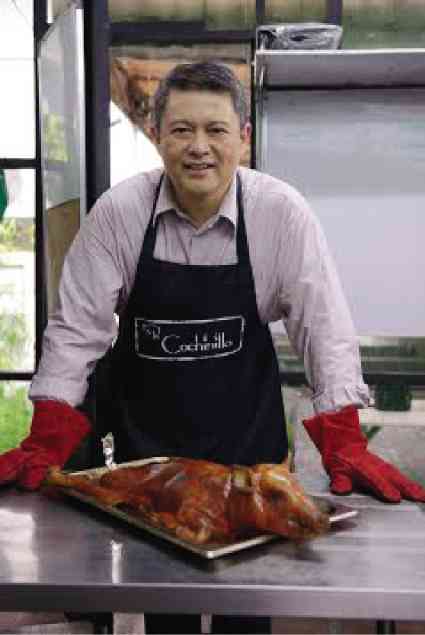 Having food inside the car was hardly a pleasurable experience until I picked up my Lechong Baboy Ramo from Mr. Cochinillo himself, Tinee de Guzman.

From the moment I loaded it to the time I reached my destination, I completely enjoyed the smell of the perfectly roasted meat.

This lechon was like no other—it was more aromatic, having a rounder whiff. Honestly it made me very hungry.

The excitement and wait were all worth it. The boar’s skin was thick, making it ultra-crispy, crackly, crumbly and tasty.

Every part that we attacked, the skin was all we expected it to be and more, especially by the neck area, which is my favorite. With its thin layer of fat, it was absolutely sublime.

Pinching further down, past the skin, we discovered meat that was between slightly firm and almost falling apart.

And like the aroma and the skin, the meat was all we expected it to be and so much more—softer, more flavorful, lean yet moist and melting in the mouth.

The slight hint of gaminess made all the difference as did the fact that I got to my luncheon in 15 minutes, giving the roast just enough time to rest. It was perfectly ready to carve.

Tinee serves his native baboy ramo with no sauce. While some will frown on this, I agree that the pig is best served that way so as not to mask the superior flavor of the meat.

My other friends insisted on using bottled lechon sauce. It did not really matter because everyone enjoyed it immensely.

Personally, if I were to dip it into anything, I would opt for good vinegar with chilies or a nice salsa with onions, tomatoes and cilantro.

Tinee said he believes that his roasts are special because the boars are strictly fed a diet of fruits and vegetables and that the cochinillos are just milk-fed, being only a few weeks old.

Nevertheless, his Spanish-style cochinillo has also been getting rave reviews for its crispy skin and soft, tasty, buttery meat.

“I believe that the careful attention I give to the process of selecting the right pig from the start spells the difference,” Tinee said. “This is followed by a slow flavoring and cooking process.”

At first bite, you will experience the validity of his claims.

Tinee’s lechon is like those you have had in the past but his is somehow delightfully different.

In the not-so-distant past, Tinee was a food and lifestyle photographer whose exposure to chefs and food lovers paved the way to his new career as Mr. Cochinillo.

“I have found my true calling,” he said. “Cooking is second nature!”

Villa del Conte remains one of my favorite chocolate brands. I love how easy it is to eat its pralines and how natural-tasting its fruit-filled chocolate sticks are.

A few days ago, I found two gigantic bars of chocolate, one milk and the other dark.

The milk chocolate bar was lightly sweetened, milky as it should be, creamy and silky smooth. The dark one had a sharpness to it that mellowed down to a smooth satin finish.

I decided to whip up a chocolate mousse.

With Valentine just around the corner, you might want to practice on your kitchen skills by making this mousse. It is an easy recipe to follow. If you do not want it too sweet, I recommend using equal portions of both dark and milk chocolate. Remember, fantastic mousse starts with fantastic chocolate.

On top of a double boiler, vigorously whisk the yolks and the sugar for about three to five minutes or until the yolks have turned a lighter yellow and slightly thickened. Make sure the water is boiling and that the bottom of the bowl that holds the yolks does not touch the water.

Remove the bowl from heat, then add ¾ of the shredded chocolate and cocoa powder to the mixture and mix well.

In a separate mixing bowl, add 1 cup of the heavy cream. Cast the bowl over ice and whip mixture to soft peaks.

Gently fold the cream into the chocolate mixture.

Spoon the mousse into shot glasses, cover with plastic wrap, then chill in the refrigerator for three hours or until they set.

Whip the remaining 1 cup of cream over ice and pipe cream on top of each mousse.