Everyone should watch ‘The Theory of Everything’ | Lifestyle.INQ ❮ ❯ 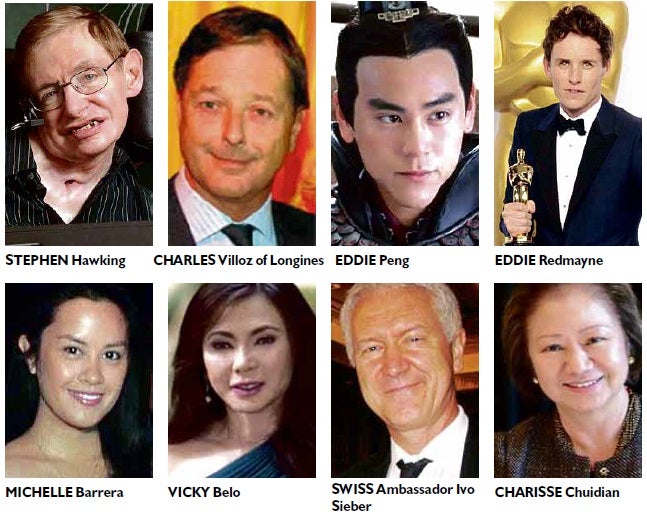 Everyone should watch ‘The Theory of Everything’

Your mantra for the week: “I am happy because I am God as me.”

Everyone should watch “The Theory of Everything.” It is the life story of Stephen Hawking played magnificently by Eddie Redmayne who reaped an Oscar for the role.

I was told that Hawking, a physicist given two years to live back in 1963, cried as he watched his life story onscreen.

So did I through the first half of the film, because I have been a fan since I read “A Brief History of Time.”

I admire the man not only for his brilliant and unorthodox views of life but also for overcoming physical challenges that would discourage one with less fortitude and strength of mind.

This genius had deep longing for answers to questions every intelligent man has wondered about at some point like, where did human life really begin?

Or what is time all about? Did it have a beginning and will it have an end?

Can one measure the distance between the Alpha and the Omega?

Is there a scientific way of knowing God or is it just a matter of faith? Is there a God beyond the Gods that have been taught by organized religions?

I think that when God is referred to as any kind of being, this definition is limited and becomes a contradiction in terms because God, in essence, is unlimited. I believe God is not a Being because it is Beingness Itself.

Hawking’s longtime search to find a scientific formula that will explain everything is still ongoing.

How he lived through Lou Gehrig’s disease, a motor neurone condition that gradually paralyzes the body over the decades, is also something to marvel about. The disease has left Hawking completely paralyzed, save for parts of his face and his brain that have remained intact.

To this day, Hawking still gives lectures through a robotic monitor that picks up his thoughts despite minimum movements of his throat and face.

Eckhart Tolle recalls running into Hawking in Cambridge and seeing someone smiling with his eyes and whatever part of his face that could still move.

I highly recommend “The Theory of Everything” to everyone because it reminds me not to bleat or complain every time I get the urge to grumble or whine about something.

If Hawking never protested about his condition despite not having a concept of God to call upon, I believe no one has the right or reason to carp about anything that is less than Lou Gehrig’s disease.

Every disease has a mental-emotional equivalent. Cancer, for instance, is believed to spring from resentment.

Lou Gehrig’s disease comes from one’s inability to accept self-worth, and denial of success to oneself. That, to me, is carrying humility to an extreme that eventually has an adverse effect on health.

I trust that, one day, Hawking’s search for the theory of everything would lead him to realize that everything is God as the thing.

I remember how my father— an agnostic who wonders why a Philosophy graduate from the University of the Philippines like me believes there is a God—turned quiet after I explained my theory that whatever there is in the universe, known and unknown, is God. And all is really in Divine Order. That was the last time we ever discussed God.

And speaking of God, here is a poem I would like to share with you—from the poetry book of Vishnu Singh, a veteran wing commander of the Indian Air Force who I met recently at a dinner.

“God is Truth and Truth is God

Two words in one slot!

Third is life, I know not—

In cosmic energy, I realize God

Truth is this, rest all is naught

True is change, its nature we see

Behind the duality, revealing He

Truth or God; as vague as reality

True may be seen, but truth can’t be.”

‘A Miracle Awaits You’

Still on the subject of books, “A Miracle Awaits You,” which I wrote, is now available worldwide through e-book via Amazon, Barnes and Noble, iTunes, Kobo and Flipreads.

While my mind still contemplated Hawking’s history of time, I received an unusual invitation from watchmaker Longines to a horse show that required a dress code of afternoon glamour: sunglasses, hats and flats, linen pants and button-down shirts.

It sounded more like a request that it was time for me to change my wardrobe.

However, I was still grateful they did not bother to give recommendations for underwear because then, there would be nothing to change.

I was invited to do a one-on-one interview with ambassador of elegance and martial arts actor Eddie Peng, and Longines vice president and head of international sales Charles Villoz, whose family has been in the watchmaking business in Switzerland for four generations since 1832.

The name Longines was derived from Les Longines, meaning “the long meadows” located on the right bank of the River Suze in the Saint-Imier valley in Bern. The first Longines factory was built here.

It has been 183 years since then; it’s Longines’ version of “A Brief History of Time.”

When the slogan of a company is “Elegance is an Attitude,” one cannot have a better representative than Villoz, who was chosen to set up a test market for Longines in the US West Coast.

When I asked him about the latest designs of Longines watches, he referred back to Coco Chanel’s quote: “What is new is really something old that we have forgotten.”

This explains why the company claims it goes for the classic rather than what is current and fashionable which, ironically, was how Peng was dressed.

Martial arts movies are not my cup of tea so I have not seen any of the box-office hits that Peng appeared in. He is said to be following the footsteps of legendary martial arts master Bruce Lee and the popular Jet Li.

Although born in Taiwan, Peng grew up in Canada. Apparently he has a large following in the Philippines considering that he was mobbed by fans in his mall appearances.

By the way, our interview with Peng and Villoz at the Manila Polo Club was followed by a horse show and cocktails at 4 p.m. Many members of the diplomatic corps engaged in lively conversations with Polo Club members and guests.

There was the friendly German ambassador Thomas Ossowski having a tête-à-tête with always chic and muy fina Michelle Barrera; the ever gregarious Mexican ambassador Julio Camarena chatting with Bruno Cristol and Robert Colombo.

Rene and Ann Puno had a good time with Swiss ambassador Ivo Sieber, who was proudly showing off one of his country’s most popular products, watches.

I am looking forward to visiting Turkish ambassador Esra Cankorur’s country this year.

At the Peninsula Manila until March 15, the photos and copper etchings of brothers Alex and Han Van Hagen are a must-see and must-own.

Through her social media account, a lady complimented the “four-coarse-dinner” that City of Dreams (COD) Manila PR boss Charisse Chuidian hosted at the hotel. I assure you, this is not a typographical error because, sometime back, a stewardess asked the same lady how she would like her steak. Her quick reply: “Very big.”

The lady in question brags about being an expert in organizing extemporaneous parties. Uh-oh, reminds us of one of Melanie Marquez’s famous lines: “I don’t eat meat, I am not a carnival.”