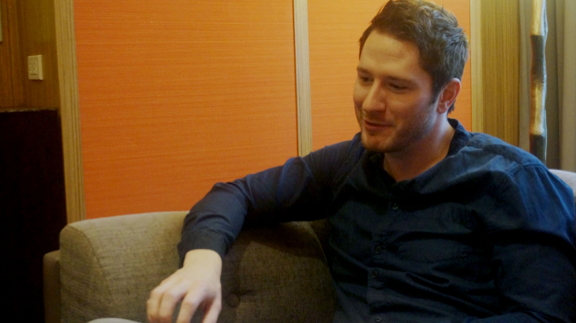 We were recently given the opportunity to sit down with singer, songwriter, and multi-instrumentalist Adam Young of Owl City in anticipation of his free show held last night at the Bonifacio Central High Street Plaza. We asked him fan questions posted on our @inquirerEX Twitter account and talked about his upcoming album, his love of YA fiction, 90s pop punk, and Doge.

This is your 3rd concert in Manila. What’re you looking forward to doing or experiencing this time around? Do you have some sort of to-do list or a personal itinerary of some sort of stuff you want to experience or places you want to visit?

I wish I had more time, to be honest. Because usually, the nature of the beast of touring is you fly in and then you’re not sure how much time (you have), then you put on a show then you’re gone. So I would just like to walk around at some point and just see what I can see honestly. I think some of the guys in the band said there was a museum, kind of a history museum nearby, I’d love to see that. And yeah, try some food and soak it all up while I can.

You’ve always been very prolific, making music for film, TV commercials, etc. Any non-music related projects you have in the pipeline?

It’s really all about music. I would love to experiment a little bit with some other stuff. Maybe writing, like, non-fiction writing is something I would love to do. Maybe some photography and whatnot. But yeah, music is such a vast world. Usually it takes most if not all of my attention but I’m okay with that too.

What kind of fiction do you think you would write?

That’s a good question. I think what I love reading the most tends to be, like, young adult — maybe fantasy, kind of like high adventure, some kind of an invented past. Probably something with talking animals. Something whimsical, kind of like what the music feels like. Hopefully that will be the mirror of what the music is.

You once said that creativity is all about pushing boundaries and pressing onward. What are you doing differently now as far as your music is concerned?

My hope is that the upcoming album this summer is a little bit more diverse than maybe some of my previous records. The way I went about trying to achieve that is I tried to create songs inspired by my love of different genres. So in my new album, there’s inspirations that vary from dance music, pop, electronic, and then there’s even some sort of a country influenced track. There’s even some punk rock sensibilities—-songs that came from my love of bands like Green Day and Blink 182 and all that.

Various influences that I love listening to kind of filtered their way down so there’s 10 songs in the new album that are almost an homage to each of those loves of mine. Hopefully this new album sounds that way. Hopefully it sounds more diverse and less of… kind of this flowing stream of one unified vibe. Hopefully its kinda more up and down.

We have some questions from Twitter that your fans wanted us to ask you. This one is from @alyssacities: “What is your favorite meme?”

That’s a good question! I love the, uh, whats the dog? It’s D-O-G-E, how do you pronounce that? You know like “much excitement.” It’s like written all wrong, you know? I love that!

I also love the… I think it’s a character from a cartoon TV show. He’s got this blank look on his face and he’s like “Not sure if… then fill in the blanks… whatever it is.” I always really really dig those.

@Ccolwin wanted to know: “When are you going to make a song entitled Manila?”

@owlcityphilippines, your local fan club, wanted to know if you have any message for your fans here?

To the fans here, I’m so blessed to be able to tell my friends and family back home that I’m going on a trip. That I’m going around the other side of the world to the Philippines and play shows in Manila. My friends back home can’t believe it because it’s so far away and it’s so cool for me to say! I just love it here, it’s my third time, so yeah, thank you to the fans for being so supportive and allowing me to come back for the third time now. None of this would be possible without the fans so thank you!