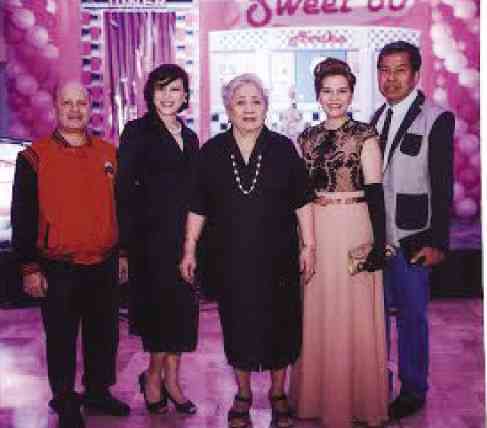 That’s quite a feat, enthused Ging-Ging, as only 18 percent (or 1,126 out of 5,984) of the examinees obtained a passing grade. That was indeed cause for celebration and a horde of kith and kin came over from Ormoc City in Leyte.

Lauren’s success has come as no surprise. She was a consistent scholar and student leader at St. Theresa’s College in Cebu where she finished secondary school. She went on to study at Ateneo de Manila University.

Also at Ateneo she obtained her “juris doctor” degree from its School of Law, graduating with honors, and ranked within the upper 10 percent of her batch.

As an active member of Ateneo Society of International Law, she participated in various international moot court competitions which simulate fictional disputes between countries. That requires participants to prepare written and oral pleadings for both the applicant and respondent positions.

In 2012, Lauren was part of the team which represented the Philippines in the Asia Cup International Moot Court Competition held in Tokyo and hosted by the Ministry of Foreign Affairs of Japan.

The team was likewise recognized for having the best written pleading (Best Memorial Award). Lauren ranked fourth in the overall ranking of speakers.

In 2014 she was part of the Ateneo-Philippines team which represented the country in the International Rounds of the Philip C. Jessup International Moot Court competition held in Washington, DC.

This is considered one of the largest moot court competitions in the world, with participants from over 500 law schools representing over 80 countries.

The Ateneo-Philippines team made it to the advanced rounds of the competition and was awarded 2nd Best Overall Memorial for the Respondent. It ranked third place in the Alona Evans Award for Best Memorial.

Lauren received the International Law Institute’s Philip C. Jessup Scholarship Award, which allowed her to participate in one of the institute’s summer programs in Georgetown University at Washington, DC.

Marilou Rodriguez Cañizares was born in 1955, when Bill Haley & His Comets were rocking the world around the clock, Elvis was about to gyrate his hips, and the culture of rock ‘n’ roll had invaded the globe.

When Marilou turned “Sweet 60” recently, her ever loving husband José Mari Cañizares and their four sons threw a party to recall that era at the ballroom of Cebu Country Club.

Every detail was taken up by Jose Mari, Joe France and his pretty wife Christa, international model Joe Vince, Jiggy and Kenzo. Relatives and friends from Ormoc City led by Marilou’s mom Carmen Mejia de Rodriguez, and a colorfully attired bevy of Zontians filled the ballroom.

There was a program hosted by Irish-American comedian Mike Hulholland, with Tina Ebrada at the piano for the name-that-tune-of-the-’50s. It was really a riot. Who won the best actor and actress Oscars for 1955? The roar stunned emcee Mike: Marlon Brando and Grace Kelly.

It was all that nostalgic, said Vice Governor Agnes Magpale who attended and had a lot of fun. She commended Marilou as well-wishers were asked that, in lieu of gifts, they make donations to the civic and charity projects of the Zonta Club of Cebu II.

The evening concluded with a tumultuous performance by popular balladeer Jun Polistico, who later got a rush from all the ladies who wanted to pose for a photo with him.