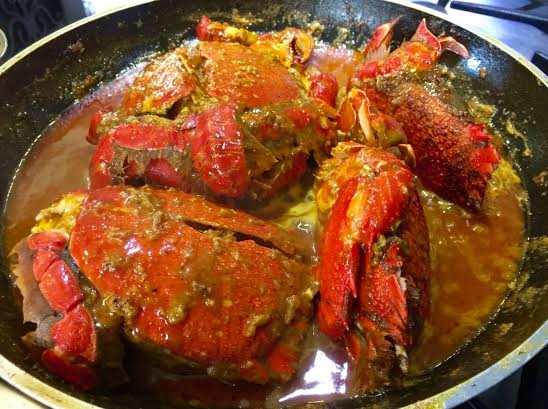 How Alavar does it: ‘Dinuguan’ Chavacano style; ‘curacha,’ crab or prawn curry

Zamboanga’s cuisine is rich, its offerings a melting pot of flavors with Spanish, Malay and Muslim influences.

Though its fare is not much different from that of the rest of the country, its local ingredients and cooking techniques make it unique.

The famous Alavar sauce is an example—sweet, mildly spicy, aromatic. It is the recipe of Ma. Teresa Camins Alavar, a descendant of Filipino-Muslim and Spanish intermarriages.

The most popular way of enjoying it is with curacha (sea crab), cangrejo (mud crab) and locon (prawns).

I believe the sauce enhances just about anything. I spoon it over my rice. It is perfect with fried and grilled meats, too. It’s what put the Alavar Seafood Restaurant on the country’s culinary map.

The restaurant started out as a carinderia at Alavar’s Travelers Inn in Vitali Island, Zamboanga. It became famous for mud crabs and wide array of seafood.

In 1973, Teresa’s husband Jun Alavar moved the restaurant to Zamboanga City proper. It was around that time that the coconut milk- and chili-based Alavar sauce with aligue was concocted by Teresa, who paired it with the curacha.

Passing on the tradition

The tradition of cooking Chavacano food was passed on to Jun and Teresa’s eldest daughter Marissa Alavar Alfaro.

I had the joy of having Marissa, her husband Pedro Claraval Alfaro, and their son Jomari in my kitchen where we cooked Curacha in Alavar Sauce and Chavacano-Style Dinuguan.

The procedure of their dinuguan I found very interesting. And while the Alavar sauce is a well-kept family secret, the Alfaros showed me how they cook it with curacha. They also gave me the recipe of their Curacha Curry.

Step 1: Cook the liempo like you would adobo. Slice pork belly into cubes. Marinate pork with vinegar and soy sauce.

Add a little water, just enough to soften the meat. Simmer until tender.

The meat, when cooked, must be soft, the mixture dry and oil extracted from the meat.

Step 3: Fry pork entrails in a little oil in hot wok until crispy.

When almost crisp, add 1 bay leaf to remove the smell of the entrails.

Step 4: Sauté the garlic and onion until brown in 5 tbsp oil extracted from the adobo and the entrails.

Add the pig’s blood and stir occasionally until mixture thickens.

Boil the blood for 30 minutes or until it is cooked (black in color).

Add a little hot water as needed if mixture is too thick.

Wash curacha or crab or prawns. In a wok, cook the seafood in a little water with a slice of ginger until seafood is done.

Simmer the sauce until thick.

Boil coconut milk. Add all ingredients except the seafood.

Cook until slightly thick over medium heat. Do not cover.