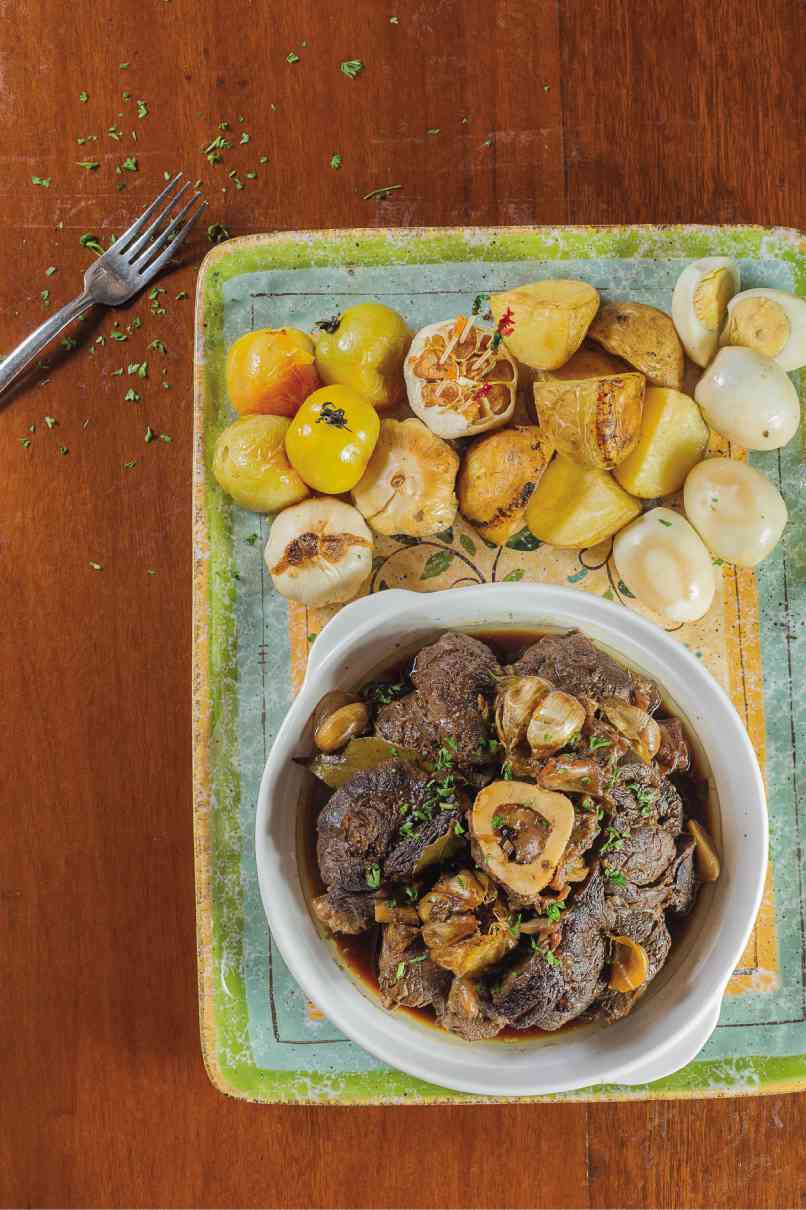 Miguel de Alba’s baked adobo version was a spin-off of his dad’s rich and heavy beef adobo. His dad is the pioneer of Spanish cuisine in the country, Don Anastacio de Alba, now 89.

“My dad’s longtime favorite was adobo,” says Miguel. “He could eat adobo almost every day. But, one day he just got tired of eating chicken and pork adobo so he tried beef.”

The father tried using beef ribs in adobo which became an instant hit in the family. He then shifted to using beef shanks, again a hit.

“The family appreciated the shank better,” says Miguel. “He was very traditional. He’d put everything—the meat and spices—in a deep pan, let it boil and serve it straight on the table with a mound of steamed rice.”

There was nothing wrong with that procedure, Miguel claims.

However, Miguel felt that he could do something better— even healthier—by finishing everything off in the oven. Instead of just serving the adobo with rice, he added vegetables as sidings and baked them with the beef shank.

The sidings include potatoes, eggplant, tomatoes, garlic and hard-boiled eggs.

Miguel is an advocate of slow-cooked food that ensures the infusion of all the flavors into the dish.

“Mine is always slow-cooked because that’s how we cook our callos and lengua,” Miguel says. “After stewing, I transfer the adobo to the oven and let all the flavors penetrate the beef.”

He adds lots of garlic, about three to four heads of unpeeled garlic, top sliced off and drizzled with olive oil. Miguel and his wife, Cachelle, enjoy eating the warm, toasty cloves right out of the head.

He also prefers using native vinegar from the provinces for that nice tangy finish.

He usually cooks about three kilos of meat and chills the leftover later.

Since the couple have been into healthy eating—and intense running for seven years now—they use the leftover to make another healthy dish.

“Whole wheat pita is a staple in the house, so I shred the beef, mix it in brown rice, then add arugula, lettuce, yogurt or sour cream, and drizzle with the adobo sauce. It becomes an exciting Filipino, Tex-Mex and Spanish dish, like burrito.”

Since he is the son of a well-known Spanish chef, cooking good food comes naturally to Miguel. However, the interest to make cooking a career came much later. He took up Accounting because he chose to help run the business of the longtime family restaurant Alba Restaurante Español.

“But, I realized the real action was really in the kitchen. If I wanted to continue our business, I ought to be in the kitchen working with the chefs and cooks.”

He went to the Center for Culinary Arts, Manila. He was already 27.

“I saw my dad’s passion,” Miguel says. “I learned a lot of techniques and skills via what he was preparing in and out of the kitchen.”

He recalls that even at home his dad would cook the best meals ever, all made from scratch. From work, his dad would bring home leftover bones from bacalao, and he’d make them into a rich caldo and use the caldo to make soupy paella with potatoes. He would add trimmings from Jamon Serrano for a richer mouthfeel. It was such soulful food for the whole family.

“That experience at home, he’d do it in the restaurant every day when he was a bit stronger,” Miguel says. “He’d always cook from the heart. He put so much love in making just one dish because the customers ought to feel it. That’s what I do now. I get excited to go to work every day for Alba Restaurant [now 63 years old]. Cooking and creating good food is the most fulfilling job for me now.”

Combine beef with seasonings, water and spices in a saucepan. Simmer and cover tightly for an hour.

Transfer everything into a baking dish, and finish off in the oven at 300°F until meat is tender.