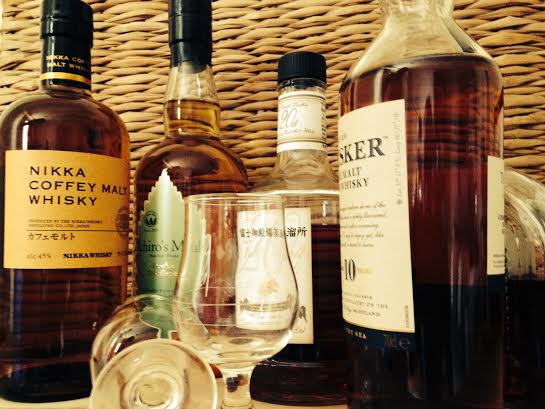 Gerald Savigny, the French founder of Wine & Spirits Education Center in Manila, will conduct a course on whisky appreciation tonight, July 2, at Restaurant Ciçou in San Juan. The event will also discuss the art of pairing whisky with canapés.

I had the opportunity to interview him prior to tonight’s event. For someone with little knowledge on whisky, I found it very interesting.

Whisky (or whiskey) is a “spirit” obtained after distillation. Before it can be distilled, grains (barley, rye or corn) are ground, mixed with water and put through a fermentation process.

In a sense, whisky is distilled beer.

How does whisky differ from one locale to another?

“The essence of whisky is water,” Savigny said. “Each country and each region has natural water sources of different qualities that will affect the quality of the whisky. When you check locations of the distilleries (especially Scottish and Japanese), you will find them literally sitting on a water source.”

“I am a big fan of ‘peated’ expressions, such as whiskies from the Islay in Scotland, namely, Ardbeg, Laphroaig, or Talisker from the Isle of Skye, or Yoichi from Hokkaido in Japan,” he said. “I [also] enjoy lean, pure and complex whiskies such as Ichiro’s Malt from Japan, Bushmills from Ireland.”

Savigny then talked about the differences of peat and peated whiskies.

He said that peat is derived from the decomposition of plants, heather, grass and moss: “The process of making peated whisky is to burn the peat, to smoke the barley. The whisky will then have smoky, medicinal or earthy aromas.”

Maturation, he pointed out, adds depth and complexity. Whiskies will seem smoother, warmer, round, easy and yet with plentiful flavors.

The type of wood and the size of the barrel are as important as the water. It is during the maturation process that the whisky will get its flavors, color and texture. Many distilleries buy used barrels from wine, port and sherry wineries.

A whisky placed in a port cask will have different aromas and flavors compared to one placed in a sherry cask, said Savigny.

Its development throughout the years will further enhance this difference. A distillery is allowed to use many types of wood barrels to showcase different “expressions” of their whiskies.

What should one look for in a good whisky?

Savigny said there should be complexity—new and different aromas must rise to the surface when you “nose it.”

In pairing food with whisky, he suggested the “classic example” of salmon from the fresh waters of Scotland with a whisky (single malt) from the same region.

Another great pairing is whisky with chocolate. A Highland whisky, a young Yamazaki or Hibiki, would do very well, too, he said.

He added that Japanese whiskies, much like sake, are made to be enjoyed with sushi, sashimi, Kobe beef, etc.

For a Scottish or Irish whisky to be called malt, it has to be made only with barley. “Single malt” means that it comes from only one distillery and has to be matured for a minimum of three years in wood barrels.

“Pure malt” is whisky made in more than one distillery.

How do Japanese malts differ?

“They are uniquely crafted,” said Savigny. They differ from the whiskies of Scotland and are adapted to the Japanese terroir—it’s a combination of soil, climate, weather conditions, water source, barley-growing, whisky-making and tradition.

The water in Japan—which Savigny said is one of the purest in the world—its climate and especially the huge difference of temperature between summer and winter, make Japanese whiskies mature faster than in Scotland and Ireland.

To fully taste a malt whisky and some of the older blended whiskies, drink it neat or with a few drops of cold water.

Glencairn glasses are recommended. They are made to enhance your experience of malt whiskies.

An alternative could be a port glass. Blended whiskies can be enjoyed on the rocks, and malts slightly below room temperature.

Store whisky in a fridge set at the warmest temperature. As soon as it is poured in the glass, it will warm up nicely to the right temperature.

The food for tonight’s pairing will be specially prepared by Ciçou chef Jill Osias.