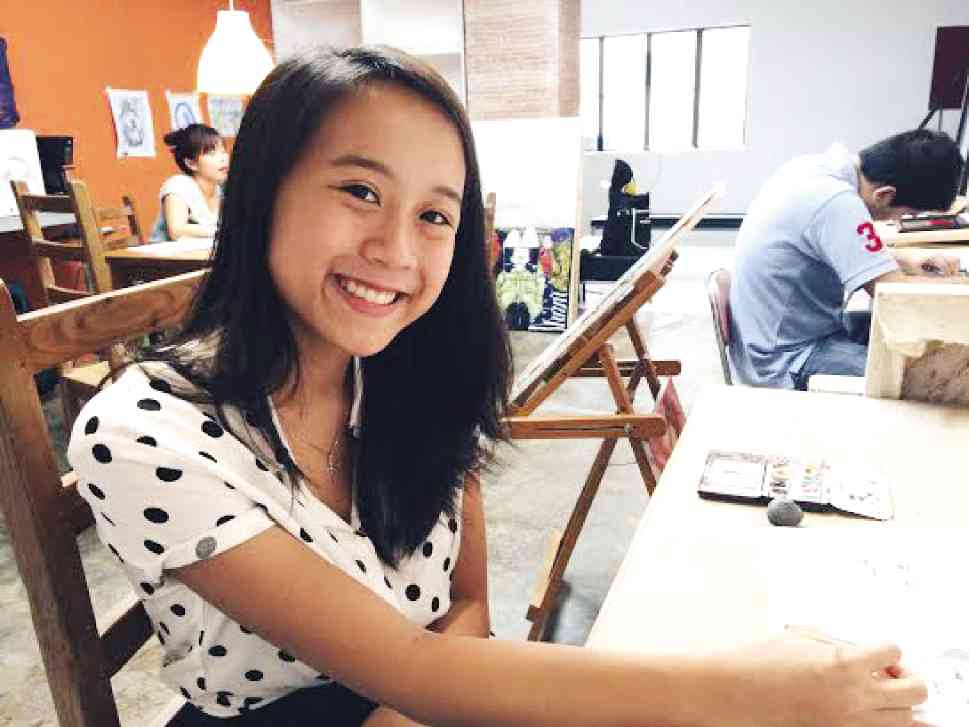 Young artist is painting portraits to fund her schooling

A few weeks ago, I wrote an article on the subject of “grit,” based on a TED (Technology, Entertainment and Design) talk by Angela Duckworth. In that article, grit is defined as having the “passion and perseverance for very long-term goals,” and is the supposed new marker for success or failure in children today.

A few days after the release of the article, I received a text message from our family friend, Nicole Olbes-Fandiño. She forwarded to me a digital flyer along with the caption, “Grit in Action.” Needless to say, I was intrigued.

I set out to meet Una and her mother, Geri, over some breakfast. On the surface, Una appears to be your typical 17-year-old. But make no mistake; beyond this, there is nothing else typical about her.

Una Isabela Gatchalian Gil is the first-born child of Dan and Geri Gil. The name “Una” seems to me a fitting name for a child who heralded the beginning of many “firsts” for the couple. And perhaps, it has served as a self-fulfilling prophecy.

It’s not hard to see where the talent comes from. It is definitely in her genes, as her father’s family hails from Angono, Rizal, and Una’s father, Dan, is the grandnephew of National Artist for Music Lucio San Pedro. Nikki Gil, the popular and talented artist, is Una’s first cousin.

With both her parents heavily involved in creative work as founders of Watusi Manila, an agency and production house, creative energy was something she grew up with. Whether it was music, dance or painting, Una has always lived a life filled with art.

Geri shares that while Una and her younger sister, Tala, were growing up, “More than academic enhancement classes, we turned to the arts to round out their education.” The girls were enrolled in ballet, piano, violin and painting. “You try to make them stick to it for as long as you can,” says Geri, or at least until they discover what they are truly passionate about.

In the case of Una, it was initially ballet. She spent the last 13 out of her 17 years undergoing the rigorous training. “Ballet is a selfish art,” Geri tells me. You are expected to show up at every rehearsal, rain or shine, school exam week or not, and practice your part.

However, as Una got ready for college, life took her down another road. As she was preparing to take the Upcat (University of the Philippines College Admission Test) and apply for the Fine Arts program, she had to prepare a portfolio for the talent and skill test. She had previously done art classes on the side, but it was not until this moment that she realized painting was her true calling.

Una threw herself into her craft and worked tirelessly with her teacher, Eleanor Giron of SET Artist Run Space in Makati, to create a portfolio that could be deemed worthy of entrance into the famed UP Fine Arts program. Meanwhile, upon hearing of her plan to pursue the arts, Geri’s sister suggested that Una apply to the prestigious Emily Carr University of Art and Design in Vancouver, Canada.

Though the Gils were set on sending Una to UP, both coming from the UP College of Music in Diliman, there was also the appeal of sending Una abroad where she would learn not just her chosen course, but also the life lessons that come from living away from home.

It was, as Geri says, “suntok sa buwan.” But soon, the family was celebrating Una’s acceptance into both UP and Emily Carr.

Then, the reality of the cost of an education abroad set in. Like any mother who would do anything for her child, Geri set off on a hunt for any scholarship or grant, but her efforts were in vain. Geri thought of trying online “crowd sourcing,” but Dan wasn’t comfortable asking people for money. Besides, Una had already come up with her own out-of-the-box solution.

Una was determined to work for her education by offering to paint portraits and using the proceeds for her share in her tuition. With her sights set on her goal of 100 portraits at P3,000 each, Una immediately created a flyer that she passed around to friends and family which they, in turn, have been passing around to more people.

I asked Geri, how did she and her husband do it—raise their children in such a way that had them taking proactive control of their lives rather than leaning on a false sense of entitlement?

Geri begins by giving a brief backgrounder on the challenges of being both an artist and an entrepreneur in our country. “You don’t know how many times they’ve heard us say, ‘Suck it up! Do your best! Give it your all!’ when they can’t get what they want or in the face of difficulties,” Geri laughingly shares. “Dan and I are in the arts, too, so we are driven by what we like to do, and in trying times we simply keep putting one foot forward. Growing up, that is what the kids saw.”

Una adds that her years in ballet instilled discipline in her. “A lot of my values can be related to ballet where it was all about ‘self chart.’ In ballet, and the rest of the arts, your progress chart is based on how hard you work. Plus, you can’t just shift anytime. You learn to commit and, when you commit to it, you have to commit your all.”

“Art as a playing field is leveled. There is no room for entitlement. How good you are and your commitment are the currency,” Geri says.

Soon, our chat shifts to the future. “What will happen after your first year?” I inquired. I imagine she can’t keep painting portraits from Canada for the next four years, although there’s certainly nothing to stop her from doing so. “It’s okay, I just need to get there for my first year,” Una answers, her determination showing. There are more scholarships available to sophomores that she hopes to avail of; otherwise, “I will work!” There it is, grit in action.

It’s an exciting time for Una, both as an artist and a young woman. It’s almost as exciting for her parents, who are watching from the wings, encouraging her to take those big steps out into the world.

I imagine it must be difficult to let go of your child. There will always be so much fear of whether she is ready, or if you have done enough to prepare your child, but in the case of the Gils, there is nothing to worry about.

Interested in ordering a portrait of yourself, your child or special someone? Send a good, clear photo of the subject to [email protected] with PORTRAITS {your name} as subject. Price is P3,000/head (plus shipping, if applicable) for a 5X7 portrait. You can also request for a bigger portrait size for a corresponding fee.