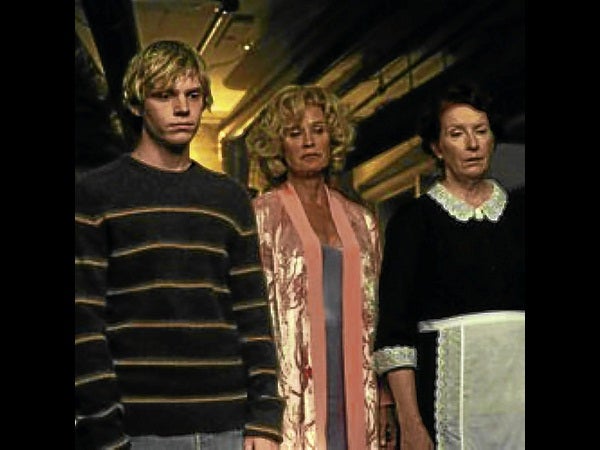 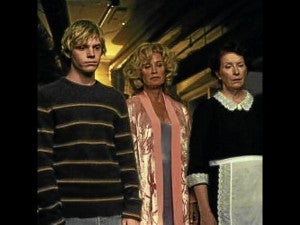 The opening credits of “American Horror Story,” the latest by Ryan Murphy (creator of “Glee” and “Nip/Tuck”) is a barrage of spooky stills, blood-splattered surgical implements, dead things in jars, and inexplicably moving shadows with whispering voices and a slight fire motif that hints at a film slowly being burned while it’s being projected.

Perhaps without realizing it, that one or so minute is a distillation of the show itself. It’s every horror trope smashed together brutally and unapologetically, and the result is a show that’s unafraid to wear its guts on its sleeve.

The family Harmon move into a nice restored mansion that is, of course, haunted. Three episodes in, and we have three different murders committed within its walls, which makes you wonder how long they’re going to keep that trend up before it becomes ridiculous (10,000 BC: A caveman killed his tribe on this very soil!).

Not only is the house troubled, but so are the people living in it. Ben, the father (Dylan McDermott) was caught cheating on his wife with one of his students, after his wife, Vivien (Connie Britton) suffered a miscarriage. Daughter Violet (Taissa Farmiga) cuts herself and smokes at a high school with some of the most lax anti-smoking measures in the world.

A cast of creepy people poke their noses into their business, including a housekeeper who is alternately an old lady and a hot French maid, depending on who sees her, a crazy next door neighbor who slips poison into cupcakes; her mentally ill daughter who has a knack for bypassing locks and getting into the haunted house; and Ben Harmon’s first new patient, a teenaged psychopath who, of course, develops a thing for Violet.

If the sitcom “Big Bang Theory” revels in its geek nature, with multiple nerdy references in each episode, then “American Horror Story” is its equivalent in horror. It’s hard not to catch the “Psycho” music and the stabbing homage at the start of episode two, but the Internet tells me there’s a ton of things that have gone over my head, so rest assured, spooky scholars out there will love to dissect this show. 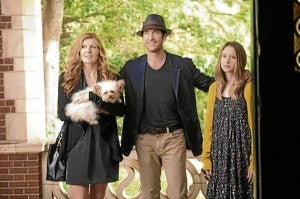 Good for them, if they can get something out of this, because this show is difficult to watch. That’s not because it’s particularly scary; its scares are of the “BOO!” type with something jumping out, and its milder sibling, a blurry figure walking stealthily in the background of a shot behind an unsuspecting character.

It’s difficult to watch because the show sports some of the worst writing to have ever hit the screen, with characters repeatedly stating the obvious. While there is such a thing as suspension of disbelief, horror stories often make viewers shake their head and ask themselves, “Why don’t they just leave this place?”

That’s acceptable in a two- hour movie, but when you start asking yourself that 20 minutes into the first episode, it strains logic. It takes a home invasion in episode two before the show finally comes up with a trite, although somewhat believable reason at the start of episode three to sort of tuck the problem away.

While the show pays tribute to some of the older exemplars of its genre, its visual style is distractingly modern, with rapid cuts ahoy. Personally, that’s a confusing, lazy way to tell a story, but with all the nonfound footage type horror movies doing it, the creators’ rationale seemed to be “why not?” 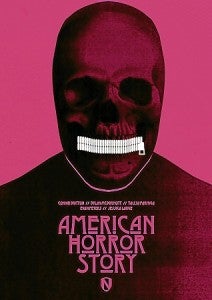 The show then adds two forms of flashbacks by the third episode, one set courtesy of a horror tour that Vivien takes which, of course, includes their own house. All in all, it’s a mess, and not because of the gore.

If there’s one redeeming quality of this show that might keep you coming back, or at least reading the spoilers, it’s the backstory of the haunted house, and the nice twist that shows up in episode three. The former is nothing new, as we’ve all heard lines before like “the city itself is the character,” or “the house is the best thing about the movie,” and that’s true for “American Horror Story” but only if they don’t go too overboard, which is not a trait Murphy is known for.

As mentioned, the beginning of the show already lets us spy on three murders committed inside its walls. That number balloons to seven at the end of the three aired episodes at the time of writing, as if the show had a quota of dead people it had to fulfill in each episode.

The latter twist won’t be revealed here, but it gets foreshadowed heavily, and like the house’s personality, can lead to good things or just be a massive letdown in terms of storytelling potential.

Perhaps it’s the smaller screen, but horror on TV seems to lend itself best to subtler, more cerebral forms of scares, instead of the guts and gore of slasher movies and their ilk.

“American Horror Story” does nothing to challenge that belief, putting together one of the most over-the-top hours of television you will ever see.

And like those slasher movies, there’s not a lot that stays with you past the initial viewing. Cheap thrills are what they are, though you may find yourself more apt to be shaking your head in disbelief, rather than covering your face in terror.