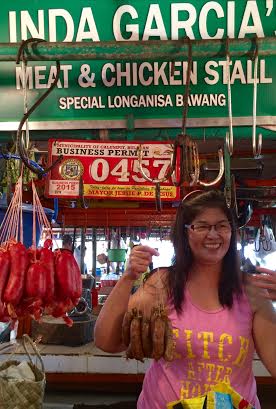 In Bulacan I met three very interesting people who have much to impart about native specialties.

Violeta de la Rosa has been a vendor of ulang (freshwater prawn) at Calumpit Market for 40 years. She shared secrets on the best way to cook it.

Aling Violeta said ulang is most delicious with kamias. The tartness gives a nice contrast to the sweet-tasting character of the prawn.

Before handing me my plastic bag of ulang, she picked one out, grabbed her cleaver and demonstrated how to chop off what seemed like the prawn’s snout (near the eye, before its main head) to remove a gooey substance which, when eaten, can trigger an allergic reaction.

She also taught me how to make a traditional sinigang na ulang with lots of kamias.

Choice of pechay, cabbage or mustard greens, washed and sliced

Put water in a pot. Add tomatoes, onions, chilies and kamias. Bring water to a boil and simmer until kamias is soft and mashed.

Add the ulang and let it cook until it changes color. The bigger the prawn, the longer it takes. Do not overcook.

Add either one of the leafy vegetables. Season to taste with salt.

I like large prawns, especially when the fat from the head begins to melt and lend its flavor to the broth. This is what makes its flavor incomparable.

Lay the pechay over the kamias to make a bed. Arrange the prawns over it and pour the coconut cream.

Cover and cook over low heat. Season to taste with salt and vetsin if desired.

Another famous stall at the Calumpit Market is owned by Linda Garcia, who has been making longganisa and tocino for 30 years.

Aling Linda, a jolly character with a smiling face, says her longganisa has graced the simplest as well as the most extravagant table: “Pwedeng pang-
fiesta!”

She points out that it has no preservatives and uses fresh pork, black peppercorns from Batangas (“the best flavor”), and garlic from Ilocos.

She can custom-make your orders of longganisa depending on how much garlic and pepper you want, with or without MSG. Since she does not add preservatives, it does not last long.

Longganisang Calumpit is meaty to the bite. It is best cooked first by boiling before frying until crisp. Enjoy it with tomatoes, fried or boiled eggplant and ampalaya.

Lauro de Ocampo from Sitio Talabahan, Barangay Bagna in Malolos, can cook any dish you can think of, topped with talaba—especially menudo and caldereta.

It is only when an order is placed that Mang Larry harvests the oysters. Which is why they taste pristine.

I like his linugawang talaba, but the most interesting is the tocinong talaba. Delicious!

(This preparation is for one kilo shelled and cleaned oysters.)

Put oysters in a pan and let cook for 15 minutes, extracting as much water as you can from the oysters.

Drain the oysters for about an hour.

Heat a wok and add 3 tbsp of oil. When hot, add oysters and cook until it slightly changes color.

Add ¼ cup soy sauce and 4 to 5 tbsp sugar and pepper. You may add a pinch of vetsin.

Cook over high heat until the mixture dries out.