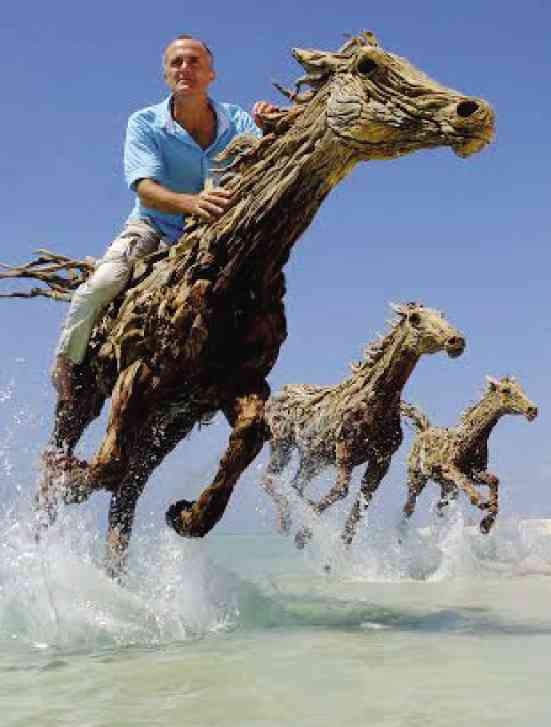 JAMES with his galloping horses

We’ve all heard that story about the expat who, after having visited the Philippines for the first time, simply decided not to leave. One such story is that of artist and sculptor, James Doran-Webb, British by birth but Cebuano by choice.

If you’ve been to Singapore’s Gardens by the Bay, you may have found yourself looking up in awe at his work—a towering sculpture of a wyvern perched on a tree, measuring six meters high and six meters wide and weighing a whopping four tons.

A wyvern is a four-limbed dragon with wings for front legs. Animals, whether mythical or not, feature prominently in James’ works.

What’s most distinct about James’ work, though, is his material of choice—driftwood. There is something romantic about giving a discarded material new purpose.

James had always found value in making the old new again. His parents were in the business of antiques restoration, and while James was born in Devon in England, his childhood was spent all over the continent, as he and his siblings tagged along with their parents in search of art and antiques.

“We did not do much schooling during that time, since Dad did not believe in the conventional academic curriculum, but we were ultra creative as a result,” he shares.

By the time he was in his late teens, James was already an accomplished antique dealer and cabinet maker, and while he initially planned to pursue an art history degree at The Courtauld Institute of Art in London, that had to be put on hold as he started his own antiques business at Portobello Road Market instead. That was to be the beginning of a creative career that would lead him, of all places, to Cebu.

A comprehensive profile on the artist can be found at his website, www.jamesdoranwebb.com, but we simply had to know more, so we chatted with James, who graciously humored us with more of his story.

What brought you to the Philippines? What made you decide to settle in Cebu?

At 17, I worked in New York under a very successful costume jeweler called John Michael Richardson and he offered me a six-month stint in the Philippines, helping out in his workshops in Manila and Cebu. I arrived not even knowing where the Philippines was.

I started out on my own after a year, initially working in Paete, Laguna, with papier mâché. The Manila traffic situation really ground me down, so I decided to move to Cebu. Cebu in those days was still traffic-free and quite remote. However, I loved Cebu for the abundance of craft and materials.

Can you tell us a bit about your family life here?

I’m a late starter in the realm of relationships. My first 12 years here can best be summed up by my craft and I was not interested at all in social engagement. I have since made up for lost time and am now happily married to a gorgeous South Korean lady, with a four and a half-year-old girl who can wind me around her little finger.

How did your driftwood sculptures come about and what was the first piece you ever made?

I have made furniture from reclaimed wood since first arriving in the Philippines, and by early 2000s had a sizeable collection of driftwood. The first piece came about from seeing a face in the driftwood. One thing led to another and a horse appeared. At that stage it was the best thing I had ever created, and my mother still has it in the attic.

Tell us more about the process, from concept to execution.

I make sketches of what I hope to see and research the particular animal to try to get under its skin. At the risk of sounding a little weird, I believe it’s important to get a sense of the emotion of the animal and to feel empathy for it.

Once I have the final sketch I will explode this to a life-sized pattern and I will make the armature or underlying stainless steel structure. I work with my small team and we assemble driftwood onto the frame, bolting the pieces as we go. It takes on average 1,500 hours to finish a horse sculpture.

Why are you drawn to the subject of animals and horses in particular?

I have an affinity for animals and enjoy the challenge of bringing an animal to life using dead material. The size and power of horses and interaction between a group of them make them very attractive subjects. I share my workshop with a number of other animals—Bertie the goat and his partner, tortoises, Jack Russells, cats and the odd chicken, all of whom are willing (and sometimes not) models for my sculptures.

Is this more of a hobby or a business? Who are your clients?

I am among the most fortunate of working individuals in that my business is my hobby. However, the creative urge has, until recently, always been tempered with the harsh reality of having to make a living. My clients come from all walks of life, from dot com millionaires to avid contemporary art collectors with considerably smaller bank balances. My favorite client is Singapore’s prestigious Gardens by the Bay, who have my first dragon and a number of my other pieces.

We heard you had to put some of your projects on hold to focus on relief efforts for Typhoon Haiyan. Can you tell us more about this?

In the aftermath of the typhoon, my brother and I trucked up food packs to Bantayan. Such was the public outpouring of food aid that we got to thinking, how else could we help? Within a couple of weeks, we had set up a boat repair station called “Bangka Relief” in Sillon Village, Bantayan, that helped small fishermen with materials and technical assistance to repair their boats.

This grew to four other Bangka Relief stations in other parts of Bantayan. I designed a bangka made completely from sustainable materials, which we call “veetabs.” We have made some 350 veetabs which are still being used today.

My main focus, however, is my tree planting project. I am on a mission to plant 80,000 trees. The original goal was to do this within five years. I have realized that it is going to take considerably longer.

How can we help with your community projects?

When you pass through Mactan or Tacloban airport, please take home a Bantayan Crafts or a Tacloban Crafts gift for a loved one. The woman who made the piece that you buy will receive half the profit from the sale, with the remainder of the profit going towards growing the project. To assist in the financing of the tree planting project I have published a photo book of my sculptures named “Animalier,” that is available from my website—www.jamesdoranwebb.com—for P1,500. A hundred percent of the proceeds received from the sale goes towards 80,000 trees.

What is next for you? Where can we view your works in person?

I am doing a sculpture that will grace the Flower Dome of Singapore’s Gardens by the Bay for the upcoming Year of the Monkey celebrations. Unfortunately, not much of my work is on public display locally.

I will have a sculpture of my first human form on view in Sillon Barangay on Bantayan Island that will be looking out to the marine sanctuary, called “Spirit of Sanctuary,” to be completed in early 2016.

What are your thoughts on Cebu as a place for artists like yourself?

Cebu seems to be a pretty difficult place for a dedicated artist to earn a living from his/her work and this has an impact on the artist being able to grow. Starting up as an artist is difficult wherever you are. Things are changing, though, and with the opening of galleries like Qube and the economic growth of the region, hopefully, artists can find a market for their work locally.