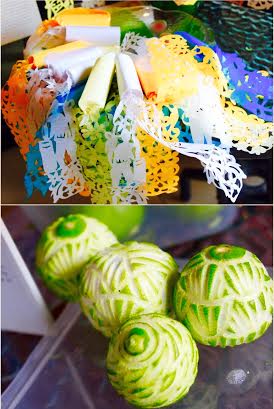 TOP: “Pabalat,” folk art of cutting paper to use as wrapper for “pastillas de leche.” Above: “Inukit,” fruit carving using “dayap” which is sweetened—as demonstrated by Naty Ocampo Castro, who learned the skill from her mother, Luz Ocampo

My recent Bulacan tour had a number of highlights.
Among them were the 1812 Tanjosoy’s Bahay na Bato; the 1933 Art Deco house of Dr. Luis Santos, famous for its Fernando Amorsolo ceiling and Guillermo Tolentino fountain; the traditional delicacies at Bulakenya Eatery, known as the culinary legacy of the Women of Malolos of 1888; the cultural presentation of the traditional Harana, Sayaw sa Ubando and Putungan (or coronation, a form of poetry recitation or declamation done by a “makata” to describe the beauty of his “mutya”); and the simple joy of being in the company of historians whose trivia on food enriched me so.

From Noel Valencia, (president, Baliwag Historical Association) and Jose Roly G. Marcelino (head, arts and culture section of Malolos City Tourism Office), I learned that in olden times, callos was a dish exclusively for the affluent, while menudo was exclusively for the casama (farmer and tenants). The best cuts were reserved for the
haciendero, and the non-prime cuts for the casama.

Menudong bukid (Spanish period) was made of sliced pigue and liver, marinated in salt, pepper, garlic, onion, soy sauce and calamansi juice. It was softened in a little water after marination, then sauteed in garlic, onion and fresh tomatoes. The meats were cooked until tender and the oil from the pork visibly extracted.

Menudong Tagalog (pre-World War 2) is the same as menudong bukid, but tomato sauce was used instead of fresh tomatoes. Fried potatoes, carrots, Vienna sausage and chorizo de bilbao were added.

Menudong patay (served during wakes) is similar to Menudong Bukid. However, the meat is very soft and shredded, because the bereaved families would make a big batch for their guests and would reheat it for days, to prevent spoilage in the absence of refrigerators.

Ka Mila Enriquez was recognized during the Philippine Centennial as one of 100 women who made lasting contributions in the field of arts and culture.

I was fortunate to have interviewed the late Ka Mila for KR in 2006 at her ancestral home in San Jose Bulacan, Bulacan. She wrote the book “Kasaysayan ng Kaluto ng Bayan.” Her interest in the history of Filipino cuisine was perhaps greatly influenced by her marriage to Jacinto Enriquez, son of Vicente Enriquez, a Katipunero, aide de camp to Gen. Emilio Aguinaldo and one of the founders of the Katipunan in Bulacan.

Her writings include Food of the Soldiers—Alay sa Kawal (from Rajah Sulayman, who was killed in the battle of Bangkusay to Boodle Fight Food in Mindanao); The Evolution of the Christmas Menu (Ethnic to Present); Ang Mga Paboritong Pagkain ng Mga Bayani; Favorite Food of the Presidents and The Malolos Inauguration of Philippine Independence Menu.

The Enriquez Family gave sole permission to Café Maloleño to recreate the dishes that Ka Mila researched on, particularly the favorite food of our national heroes.

This was the spread Ferdie Talbenito (Bistro Maloleño’s owner) carefully prepared and beautifully presented for us to feast on.

Tinola ni Jose Rizal (with kalabasa instead of sayote)

Over sweets and a cup of coffee, the traditional art of pabalat, the folk art of paper-cutting used to wrap pastillas de leche, and inukit, or fruit carving using dayap or native lime, then sweetened, were demonstrated by Naty Ocampo Castro. These are crafts handed down by her mother, Luz Ocampo.

We handed my students little colorful “puni” birds handmade by Rheeza as souvenirs. Puni is the traditional art of leaf fronds folded and used as toys, food containers and palaspas.

The trip to Bulacan reaffirms my belief that there is much more about the Philippines waiting to be discovered.

For Mila Enriquez’s cookbook and puni demonstrations, call Rheeza Hernandez at 0915-4339438. She also accepts orders on behalf of Mang Larry, the man who makes all sorts of dishes out of oysters. His tocinong talaba is delicious.