New technology measures body imbalance as you do your sport 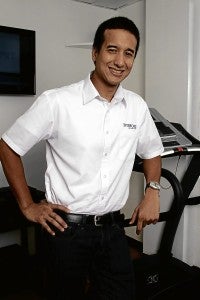 After the Ironman World Championships in Hawaii, triathlete Noy Jopson holds the Philippine record of 10 hours and 32 minutes for the combined 4km swim-190km bike-42km run.

The amazing strength of the 36-year-old Cebuano could be quantified by a new technology. The technology also spotted some weaknesses.

Called Optogait, it measures how fit and balanced the bones and muscles are while standing and doing the most basic movements of walking, running and jumping. It’s not just for athletes, gymnasts and dancers who want an objective measurement of their capabilities to help them refine their skills, but also for people who want to know the source of their chronic joint or muscle pains.

“There’s a new wave of technology that picks up information about daily movement. There hasn’t been an objective measure of strength, flexibility and stability that can compare the left side of the body with the right side.”

He explains that this system measures the equality of movement between the left and right kinetic chains (the connection between the ankle, knees, hips and lower back).

A kinetic chain consists of all the elements that make the movement possible—bones, joints, muscles, ligaments and nerve connections. When a part of this chain is fragile or damaged, it will affect other parts and invariably manifests itself as a weakness or an ache.

According to Camara, Optogait measures main components needed to perform well. Strength is the ability to generate power. Flexibility or muscle elasticity is how fast your muscles allow you to recover to take the next movement. Stability is the ability to control your strength and movement.

Camara adds, “People do core strengthening like Pilates and suspension workouts but there’s no measure for core stability. This is the only test, in my opinion, that can actually objectify their ability to stabilize their core. You may feel better after core strengthening and can do more movements, but it’s all feel. How can we see that you can stabilize your core and kinetic chain when you’re moving around? This test can measure.”

Beyond X-ray or MRI

When diagnosing a chronic problem, an X-ray or MRI may not always show the cause. 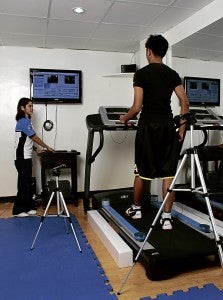 “The problem may not be structural or what you can see, but what happens during movement. You could have no pain but as soon as you start walking or running, the pain develops. This new technology using functional testing with infra-red rays has the ability to measure what is happening to the muscles and joints during sports or daily activities,” explains Camara.

How does it work?

A transmitting and receiving bar and cameras capture information while the individual is being tested. A software processes the data to show measurements on the individual’s performance.

The client’s back and profile are photographed and placed under a grid to determine if the body is aligned.

“First we look at the structure of the individual. What’s important is balance and symmetry. If there’s equal weight, strength and stability on both sides of the body, the person is centered and balanced. We look at the profile to see if the natural curves of the back are falling in the right places.”

The other tests focus on how the individual puts load on the muscles and joints. For people who play racket sports, soccer or basketball, there is a visual reaction test which determines how quickly the person responds to a stimulus.

On Jopson’s tests, Camara shows data that indicate his muscle strength and balance: His left side is as strong and aligned as his right side.

But other tests reveal that Jopson is less flexible on the right. The jump test for stability revealed he needed to strengthen his core.

“Although Jopson generates lots of power, he’s got stability issues. We need to strengthen his core so he can control the power more,” says Camara.

The gait test, which measures the length of the strides, also indicates if the athlete uses the right shoe. “I run a test with the client barefoot and with shoes on. If the numbers are skewed, he needs a better pair of shoes. With Jopson, the difference was dramatic.”

Of the Optogait, Jopson says, “It helped me see some weaknesses in my running that I was not aware of and could improve on. I have a longer stride on my left leg than my right when I’m barefoot. 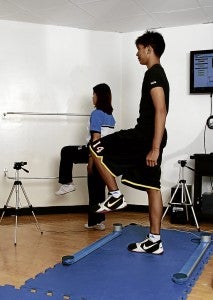 “With my Nike Lunar Spider, the leg length discrepancy is negligible. The test verified I’m using the right shoes. It’s also been insightful. I have tremendous power in my legs. My jumps were high but I wasn’t able to land in the same place consistently. I was deviating to the sides. This means the straightforward propulsion needed in running is not fully utilized because I’m not stable. After Ironman, I’m working on strengthening the core stabilizers.”

As a coach, Jopson recommends the Optogait because it detects specific imbalances which can’t be determined by standard tests.

His clients, a 49-year-old triathlete, is in the Top 20 of his age group. When the client began training with Jopson, he was shuffling while running.

“He was not lifting his leg too much at the back when it should be brought toward the buttocks and lifted,” observed Jopson.

After undergoing the test, Camara noted the imbalance. “He’s stronger on the right yet less flexible. Any imbalance will create problems. This flexibility has to do with elasticity. It takes him more time to recover from one step on the left versus the right.”

The results can help Camara design a program to improve the individual’s condition.

It is required that the triathlete repeat the test after two months to measure his progress.

Jopson says Intercare’s program includes chiropractic adjustments and myofascial release therapy (deep tissue massage) which can release the tightness on the triathlete. With that information, the coach could customize his client’s training program.

Camara points out that Optogait is also recommended for ordinary people.

He shows a profile of a patient with repeated lower back pain. “It’s a sway back—the belly protrudes out more while the back is hyper-extended, causing compression on the lower back,” he notes.

The patient’s test results indicated she had average strength but was stronger on the right side while the left was less flexible and unstable. Knowing what’s happening in her kinetic chain and measuring that allows me to see where she’s at and we’ll take it from there,” says Camara.