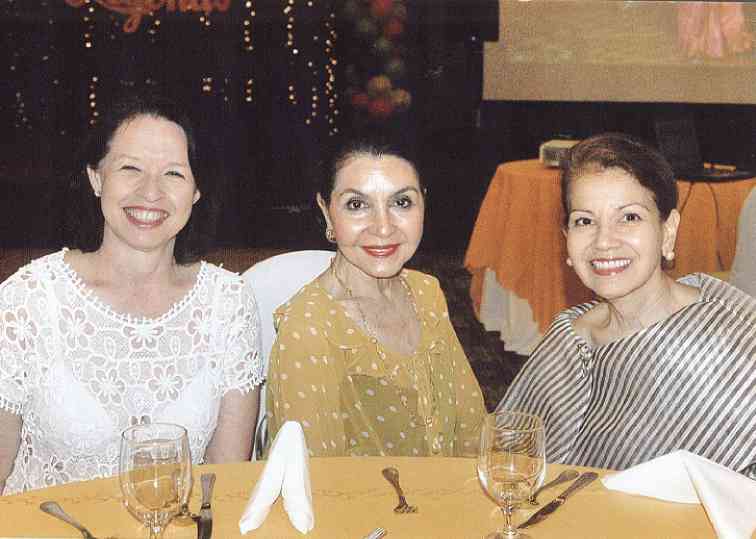 Once more, Casino Español de Cebu held an evening of “Casino’s Got Talent,” this time with the theme of Reviving the Legends. A good crowd filled up the ballroom to make merry, partake of an excellent buffet, and applaud the intrepid and very talented performers.

As usual, it was coordinated by Honey Loop who asked Bunny Pages to host the program. May Ocaba made sure the service was perfect.

The program started with Rene and Joy Kintanar playing the “Jealousy Tango” on the cello and keyboard. Then came another tango, danced the Argentinian way by Cely Chiongbian, to the sound of “Leyenda del Zorro.”

Doing a take off from ABBA were Tina Jordana, Athena Engracia and Yasmin Ngo. Aurora Fernandez and her sister Julia Causing glided to Barbra Streisand’s “The Way We Were.”

Tony Quisumbing did a few solo renditions with his sleek harmonica, and later his wife Lorna regaled the audience with intricate modern dance steps. Paco and Monique Jarque, bewigged, impersonated Sonny and Cher at their height of fame.

Most applauded of all were Enrico Gandionco, Ed Chiongbian, David Chan and Laureano Rogero who sang a medley of Barry Manilow favorites.

The grand finale was in the style of a Las Vegas revue, complete with girls wearing feather boas and gents in black tuxedos, performing “New York, New York” and other Frank Sinatra classics.

Next grand event at Cebu’s Casino Español is the annual observance of Dia de La Hispanidad on Oct. 10 with the presence of Spanish Ambassador Luis Calvo. It marks the 95th anniversary of the club, founded in 1920.

There will be cocktails at Salon Granada starting at 6:20 p.m. with an array of Spanish favorites, including jamon Iberico. The action moves to the Salon de España ballroom at 7:30 for the reception and program, highlighted by toasts. Dinner is at 8:30 p.m. and then there’s dancing till the crack of dawn.

“Exquisitely Filipino,” with accent on the Cebuano, was an evening of fashion, art and culture, at the Atrium of Northwing in SM City Cebu. It was one among the many events held for the recent gathering of delegates of the Asia Pacific Economic Conference.

Receiving the guests were Cebu Governor Hilario Davide III, his wife Jobel Angan Davide, Vice Gov. Agnes Magpale, Aster Caberte who heads the regional office of the Department of Trade and Industry, and Ethel Natera who is in charge of the Province’s information office.