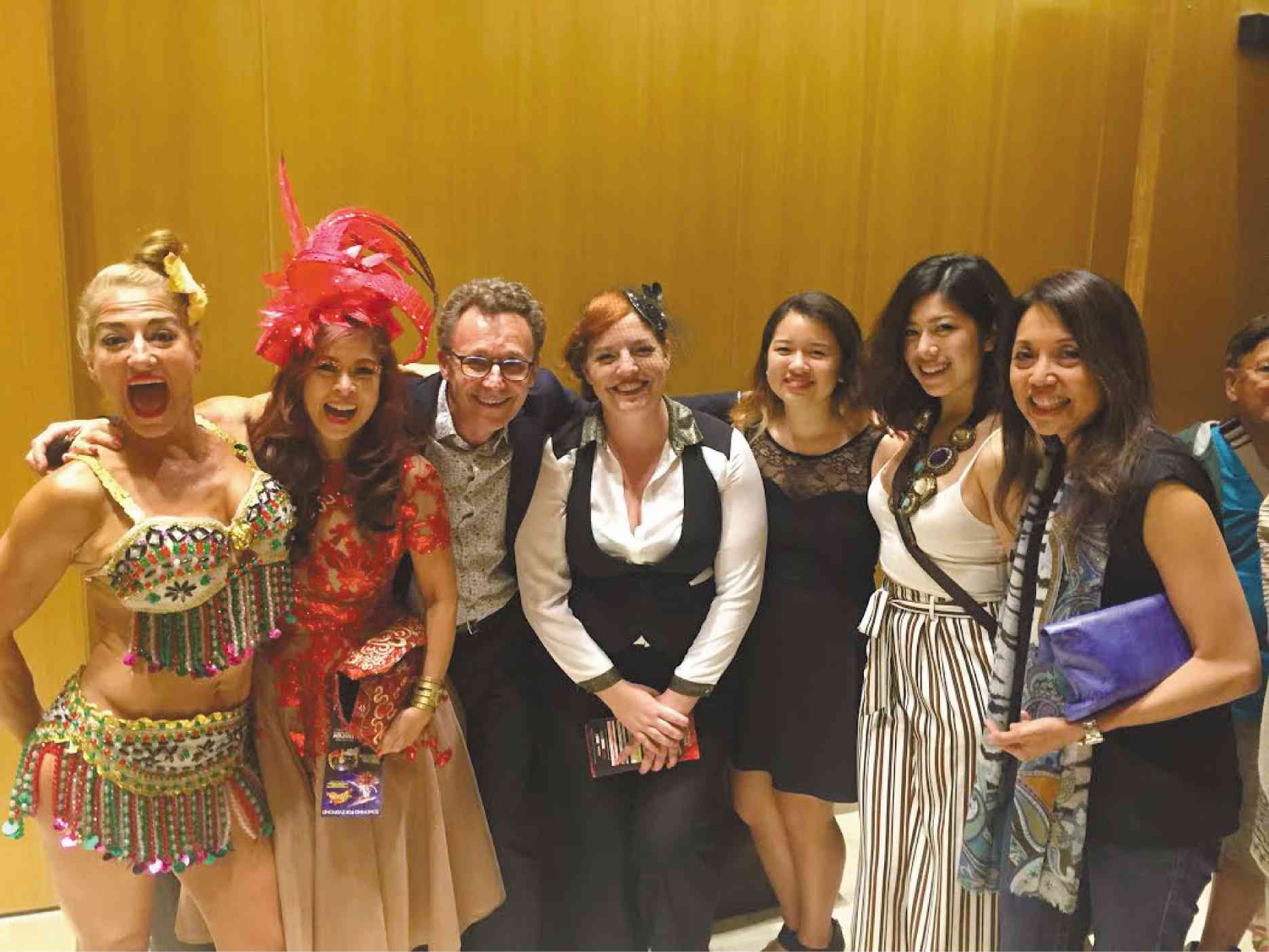 I love the nightlife!

They say life is like a circus, with spectacular performances and unbelievable feats of strength and dexterity. Add in a bit of mischief and naughtiness and you get “La Soirée”—a heady cocktail of cabaret, new burlesque, circus sideshow and contemporary variety.

On opening night, my constant travel buddy Pepper Teehankee and I completely enjoyed being on stage with the rest of our friends. My favorite acts were the sensual aerial rope performance over a bathtub and the pole dancing act to the iconic scene from “Singin’ in the Rain.”

“La Soirée” has been the crème de la crème of the cabaret world, naughty yet engaging.

Tonight is the finale for this theatrical phenomenon, which has been regaling audiences at The Theatre at Solaire Resorts and Casino for just a week. The Theatre makes for an intimate stage, so the audience is up close to the performance. Truly every seat is a great seat.

Pepper and I were also recently together at the Casa Noble Ultra Premium Tequila dinner at Mecha Uma, one of the most exciting fusion restaurants in town.

Mecha Uma was the stage for owner/chef Bruce Ricketts to showcase his super delicious, fresh, Japan-sourced seafood with a Mexican cooking style—perfect for a tequila event.

Casa Noble is critically acclaimed and acknowledged as one of the world’s finest ultra-premium tequila brands, made from 100 percent, organically grown “blue agave” and widely sought for its unique aroma, smooth taste and distinctly satisfying, velvety finish.

Ambassador Julio Camarena from Mexico was the guest of honor and he led the toasts with a Casa Noble Single Barrel bottle. Casa Noble is the first to develop a single barrel program in the tequila world, elevating the standard for a “reserve” or “limited edition” tequila.

At the dinner, I found out that music legend Carlos Santana is one of Casa Noble’s owners, and US President Barack Obama is an aficionado. This reminded me that a Santana-autographed guitar was auctioned off last year at the Red Charity Gala, won by CATS Motors owner Felix Ang.

Shop for a cause

We are grateful for the annual support that Casa Noble has been giving the Red Charity Gala, which benefits the Philippine Red Cross and the Assumption HS ’81 Foundation.

Our Assumption batch has been active with the different Assumption charity affairs like the recent “Shopping Day for a Cause” at Crate & Barrel in SM Makati.

Copies of “The Silver Linings Cookbook”—compiled and produced by Barni Alunan Escaler, Ana Javelosa Gloria and Therese Ng, all alumnae of Assumption College—were also sold during the event.

If you missed that one day sale, don’t fret; Crate & Barrel has a Houseware Sale until Oct. 18. Check out the 30 percent discount on selected items.

With October just around the corner, Red Charity Gala cochair Kaye Tinga and I are gearing up for our annual fund-raiser. This year, I am hoping that the top auction item will be a Balesin Island Club membership worth P2.2 million.

I don’t know yet how to get that prize item, but Alphaland chair Roberto V. Ongpin is a generous man and he has been so supportive of my charities in the past, so who knows…

His company, Alphaland, the developer of Balesin Island, was also one of the first responders after Supertyphoon “Yolanda” struck. The company utilized their planes to ferry relief goods to the stricken areas from Leyte to Palawan.

Bobby Ongpin’s son, Julian, is doing his own efforts to help other people. Julian is opening an art gallery to showcase emerging young artists, a select stable of Filipino and international ones as well.

The gallery is called Joya— for Julian Ongpin Young Artists.

“Frontiers” opens Oct. 1 at 6 p.m. The show aims to highlight the different states of movement and tension within each artist’s collection. As Julian puts it, “I hope to shine a light that is both refined and sincere, and in this way share something great with the world.”

In that sense, he’s very much like his father.